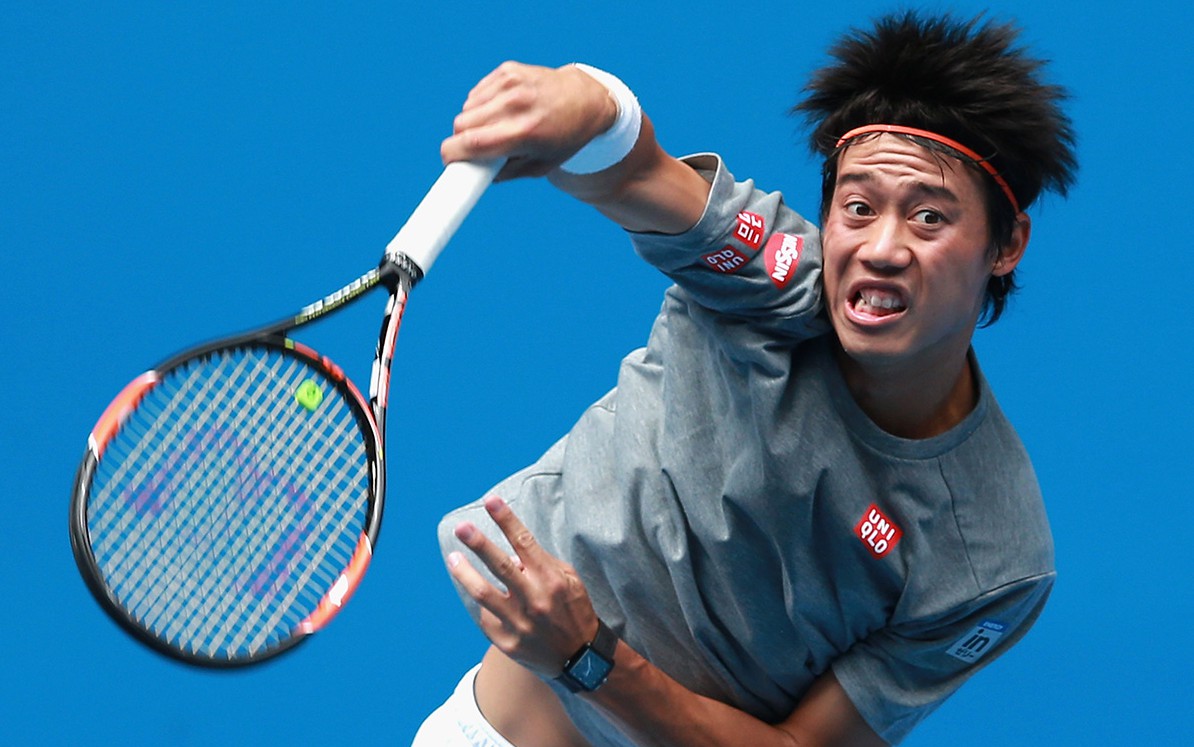 The sign of a possible sea change in men’s tennis — however slow, however halting — came not when Stan Wawrinka beat Rafael Nadal in the final of the Australian Open last year. It came a week earlier. It began with Kei Nishikori.

Nishikori was part of a small group of players who had shown great promise when they turned pro but who had not lived up to it. They had military-grade serves, or an astonishing backhand, or the kind of forehand that makes me think of Cary Grant. They were called prodigies, phenoms, future champions; the one with the forehand was called Baby Fed. But they never challenged for big titles. They’d rarely even come close. At times, it seemed as if they didn’t even dream of winning. They’d misfire a backhand on match point and trot to the net to shake their idols’ hands. They seemed to accept this, with a kind of cheerful shrug, like it was all an accident of birth.

They were no longer young, though they could still seem it. Nishikori had just turned 24, but he looked more like 14 — slight, long-faced, unassuming. His clothes seemed looser than they were, like he might grow into them. His size was the first thing most people noticed, if they noticed him at all. At 5-foot-10 (if he stretched) and 150 pounds, he seemed too small in a sport that favored height; the physics of serving are pretty basic. Technically, his groundstrokes were almost perfect. He had quick, light feet; excellent balance; and a rare sense of where the ball would be. Moving inside the baseline, he’d strike it early, catching it on the rise and sending it back flat and hard. The ball would fly off the strings so cleanly that the thwak had the pure sound of a tuning fork. He had startling power — fluid and natural. His backhand and returns, liabilities for most players, were his weapons. But he had a reputation as a grinder, a counterpuncher who could be overpowered, or a player who’d panic when he tried to hit a winner, making poor decisions or yanking his shots. He had wins over Roger Federer and Novak Djokovic, but like the other members of his micro-generation, he seemed too respectful toward them. When Michael Chang first met Nishikori, at an exhibition in Tokyo in 2011, Nishikori talked so much about how he idolized Federer, Chang told the New York Times last year that it was “as if he was like a little boy looking up and there was Roger’s poster on his wall.”

Chang joined Nishikori’s team in December 2013, part of the movement of players bringing on former Grand Slam winners as super-coach consultants. Chang — who’d never coached on the ATP World Tour before — hadn’t taken the job lightly. He knew, he’d later tell the Times, how life on the tennis circuit could strain families, and he knew he faced a big task. Nishikori had finished 2013 ranked 17th. He needed more power on his serve and to play more aggressively, needed to take advantage of his court sense and his phenomenal touch. (Nick Bollettieri, whose Florida tennis academy Nishikori had attended as a teenager, said that Nishikori’s hands were as good as any player’s in history.) But there was something about Nishikori that made Chang want the job. There was a reason, besides the play on his name, that people called Nishikori “Special Kei.” Partly, it was the potential for Nishikori to become the greatest Asian player ever. Partly, it was that Chang thought he could help Nishikori improve his confidence and resilience, his self-belief — that most banal, most important, and most impossible skill for a tennis player to learn.

The potential was there. You could see it in last year’s Australian Open match against Nadal — the surprising power of his flat drives through the court, his tantalizing little drop shots. His backhand could withstand Nadal’s lefty forehand assaults until Nishikori could use his quickness to move wide into the doubles alley, take the forehand inside out, and open up the court. Nadal wasn’t yet hobbled with back and wrist injuries. He was the no. 1 player in the world. Nishikori was matching him, shot for shot, not by zoning but by simply playing his game, and his game was that good. But the belief wasn’t quite. In the end, Nishikori lost in three sets that were as tight as they could be — 7-6 (3), 7-5, 7-6 (3). Later, characteristically, Nishikori refused to allow that the match could have easily gone the other way. “I’m still a long way from winning against him,” he said.

But sitting in Nishikori’s box, Chang saw something else. The Japanese player had come into the match wondering if he could possibly win. “Now you know,” Chang told him.

He would seem to arrive, and then he’d disappear. In Miami two months later, in March, Nishikori beat David Ferrer 11-9 in a third-set tiebreak — an especially significant victory when you consider that Ferrer is usually the gatekeeper for the top players, the one who vanquishes any challenger and then gracefully bows out against Djokovic, Federer, or Nadal. Then Nishikori came back from a set down against Federer to win — only to retire from the match with a hurt groin, before his match against Djokovic. Two months after that, in Madrid, he beat Ferrer again in three dramatic, tight sets. Against Nadal — the King of Clay! — in the final, Nishikori played with an astonishing, almost unbelievable, balance of patience and abandon. He controlled points with effortless pace, inching forward as he pushed Nadal back, taking the ball earlier and earlier, unsettling Nadal’s rhythm, swinging the Spaniard from side to side. He was up 6-2, 4-2, but his back seized up. Down 3-0 in the third, Nishikori was forced to retire. “We don’t deserve the victory,” Toni Nadal said afterward.1 “He deserves it. He played better than us the whole time.”

Nishikori was getting a reputation for being fragile. He’d struggled with his elbow, abdominal muscle, groin, back, toe — and perhaps his mind. Even his coaches admitted they thought he was a little afraid of pain. Maybe his small frame really was too delicate for the strain he put on it. It seemed he couldn’t even withstand the stress of a single-week, best-of-three-sets tournament, let alone a two-week, best-of-five major.

There was no longer any question that he had the game to win. He was poised to break into the top 10. But it was so easy to look at him and then to look past him.

What if the man who seems the most fragile turns out to be the strongest? Chang and Dante Bottini, who has coached Nishikori since he was at Bollettieri’s, worked to keep him on the court, to teach him to recognize the difference between hurting and injuring oneself. They built his stamina. They helped him view the top players as competitors, not heroes — and helped him see himself among them. They helped him understand he couldn’t win unless he gave himself a chance.

And Nishikori did. When he beat Milos Raonic, another member of the Lost Boys, in the fourth round of the 2014 U.S. Open 4-6, 7-6 (4), 6-7 (6), 7-5, 6-4, it was 2:26 a.m. — the latest time a match has ended in tournament history. In the next round, Nishikori had to face Stan Wawrinka — a Grand Slam champion with some of the hardest, heaviest groundstrokes on tour. The match took four hours and 15 minutes — four hours and 15 minutes of pummeling, of fantastic shot-making, twists and turns, taunting little drop shots and flat, heavy drives. It was a stunning thing to watch live, as tense and dramatic a match as I’ve ever seen. Nishikori played better as the match went on, appeared stronger and more confident, even as his serve grew weaker and weaker — because something had to give. The exhaustion poured off him in waves.

He had to play Djokovic next. I thought there was no way he had a chance. It was Djokovic — the marathoner, Djokovic at the U.S. Open. Nishikori stunned me by winning the first set, then seemed to confirm my expectations by quickly going down in the second. He was letting shots he might have reached sail past him; he was finishing points quickly by hitting them into the bottom of the net. The match appeared to be over. Nishikori looked so tired that he could barely stand.

Then something strange happened: Nishikori revived. He won the third set in a tiebreaker. He appeared not only stronger but also taller, lighter. He threw his body into his returns, putting his full weight into his shots. He played with angles, he ran down would-be winners, he smashed overheads into the seats. He frustrated Djokovic with his fight. A thought dawned on me, more incredible than it might seem: Nishikori had tanked the second set. This is actually very, very hard to do effectively. I’m not talking about playing strategically to finish points more quickly; I’m talking about losing really fast. What you conserve in energy, you lose in almost every other respect. Nishikori was somehow able to let go of the match while still holding on. There was the sea change — that was the difference. What had been deference became readiness. What had been weakness was strength.

Nishikori is not a charismatic player. His manner is loose, almost languid, and his game is unflashy and classical. It’s beautiful in its balance, in its precision, but beauty can be hard to love. It can be hard to see the man behind it, and so it can be easy to assume there isn’t much there — that there isn’t much heart. That changed in New York. But maybe we should have seen it all year long. Nishikori’s record in deciding sets in 2014 was 21-3. The man who seemed prone to wilting was the most clutch player on tour.

Nishikori comes into the Australian Open as the fifth-ranked player. All of the players in front of him are Grand Slam winners. He’s shown he can beat any one of them — and turn around and beat another one. It can be hard to know when to stop, when to rest, when to push on. Nishikori has a gift, one too easy to take for granted, and he is learning how to use it. It takes self-possession to be patient. Perhaps Nishikori is just waiting for his time.