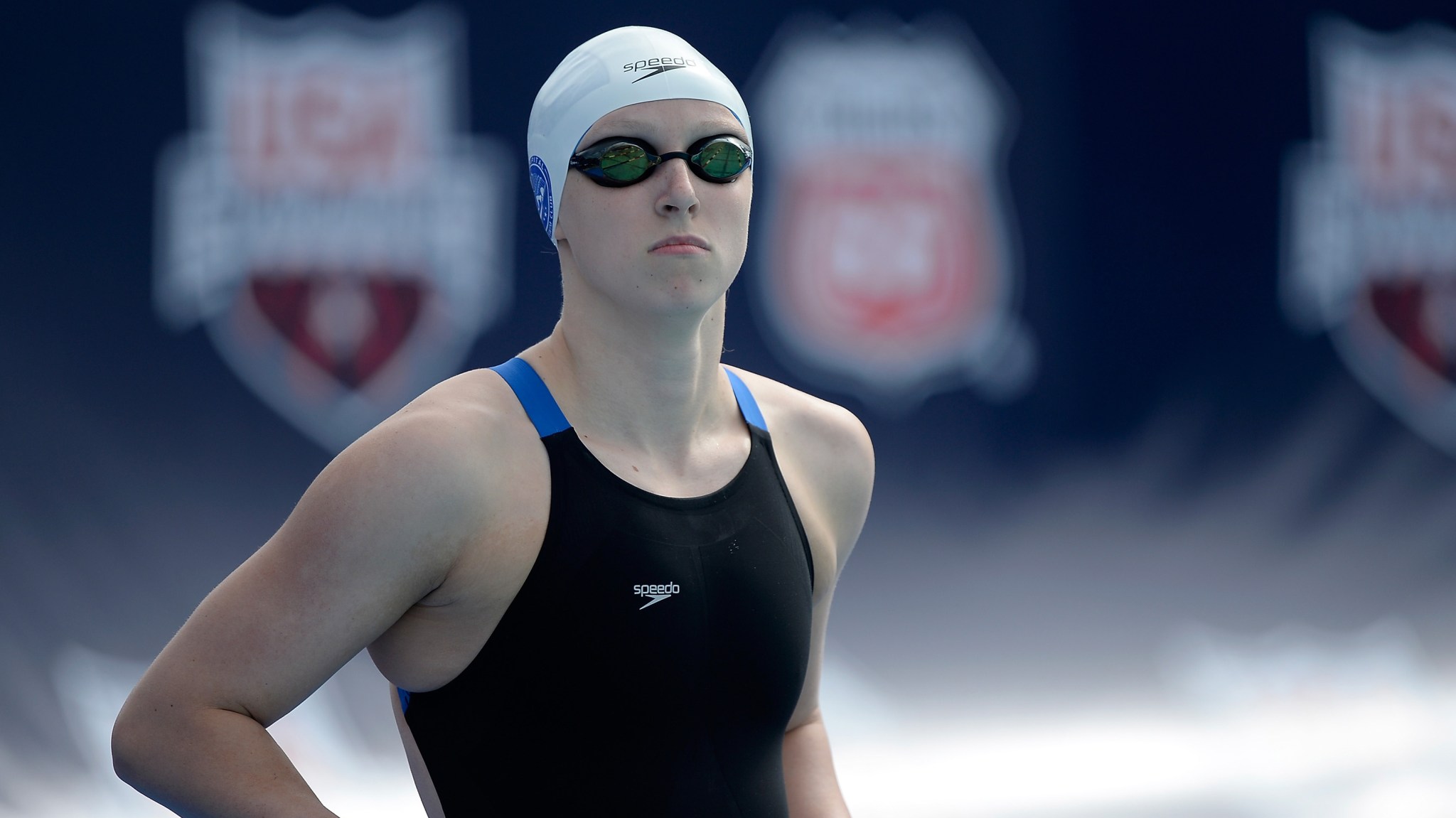 The thesis is a gasoline fireball from which Katie Ledecky is walking away in slow motion, too cool to look back.

The thesis is the world-rippling blast from the engine of the F-18 that Katie Ledecky is flying with one hand.

The thesis is the tiny gleam at the corner of the smirk on Katie Ledecky’s face one second before she disarms the pirate captain and stabs him in the heart.

Katie Ledecky swims freestyle in a way that produces the following sentences; think of them as the splashes she makes on her turns. She’s never lost in an international final. She’s owned an Olympic gold medal for more than two years. (Again: She’s 17.) This summer, wearing slow swimsuits,1 and without really being in major-competition shape, she broke every world record in her discipline, long-distance freestyle, over the course of a month and a half. Then she was like, ha! just kidding, so she broke a couple of them again.

The thesis is Michael Phelps, the greatest American swimmer of all time, a guy currently in the middle of a major comeback, recently interrupting one of his own post-race interviews in order to call Katie Ledecky a “stud.” Twice.

The thesis is that this matters. It matters a lot.

I have a weird relationship with rate-of-speed sports — your so-many-meters-around-the-track sports, your Speedos-at-the-aquatics-center sports, your uh-Secretariat-is-the–Millennium Falcon sports. There’s something thrilling about a chase, absolutely. But a lot of the time, to me, watching races means watching a bunch of athletes all doing exactly the same thing … only some of them are [gasp] doing it slightly faster. They’re all chopping their arms and spinning their legs like wild steamrollers, only some of the people you’ve never heard of are, for reasons you can’t really divine, chopping and spinning at a rate that means they’ll finish a fraction of a second ahead of the other people you’ve never heard of. It’s like, Wow, look at the arbitrary momentum disparity between those two blips; let’s celebrate nationalism!

And sure, I realize there are whole complex chess matches sublimated in the middle-distance backstroke, and that all sorts of mind games and counter–mind games are being played involving who goes out fast versus who waits to make a move, etc. If you’re not deep in that world, though, it’s obscure. I will occasionally flip past the peleton migrating toward Paris during the Tour de France, and I generally feel at those moments like I would rather be watching salmon do their version of this, because at least then bears would be trying to eat them.

I do not feel this way when I watch Katie Ledecky.

The first race I ever saw Katie Ledecky win was the gold-medal final in the 800-meter freestyle2 at the 2012 Olympics in London. She was 15, kind of a peripheral figure on an American team dominated by Phelps and by the (slightly) older Missy Franklin.3 If you watch the video now, it’s amazing how little the commentators are attuned to her — there’s a sense, not exactly that she’s a nonfactor, but that she’s a promising kid who’s here to gain some experience. She’d been third in the qualifying heats, with a time a shade over eight minutes, 23 seconds. Impressive for a 15-year-old, but not calculated to sow fear among the field. Most of the announcers’ attention is on Rebecca Adlington, the 23-year-old world-record holder in the event, who’s universally considered the favorite; Adlington is also English, so there’s an added layer of drama because she’s racing in front of a home crowd. “For the locals, this is the highlight of the whole swimming Olympic program,” the commentator says before the race. He’s not talking about Katie Ledecky.

Then they start swimming.

She can’t keep this pace up, right? I don’t know much about long-distance swimming. But I remember being sure, when Ledecky jumped out to a huge lead, that it wouldn’t last. The announcers don’t seem to think much about it; they acknowledge her fast start, but they keep the focus on Adlington and the other experienced swimmers. It’s a long race, the 800. You can go out searing fast, but if you don’t save something for the last two minutes, you’re going to fall back. She’s too amped, I think. She’ll learn from this; it’ll help her for 2016.

Only … her lead keeps getting bigger. At 200 meters, she’s a full body length ahead of anyone else in the pool. Her 400-meter split time would have been good for fifth in the 400-meter final — a race where the contestants are not saving their strength for 400 more grueling meters. There’s a special kind of lightness you feel when you realize you’re seeing a truly great athlete for the first time. When you understand that what you’re watching is not someone who is merely very good, or very tough, or very skilled relative to her peers, but someone to whom the normal rules do not apply. When your imagination runs the math on an athlete and returns an error sign. I remember the first time I saw Kevin Durant play basketball. He was a freshman at Texas. I have no idea who he was playing against, but I remember slowly realizing what I was seeing, thinking, So wait … how will anyone EVER stop that? and losing all awareness of the floor.

At 750 meters, Ledecky is three and a half seconds ahead of the field. That is — guys, that is a long way in world-class swimming. It’s way beyond the point where you’re definitely going to win. It’s the point where there’s no one else in the pool. She finishes in 8:14.63, the second-fastest time ever, breaking the 23-year-old American record by nearly two seconds. It’s likely that what keeps her from breaking the world record, instead of merely winning a gold medal, is that she’s so far ahead of everyone else that she doesn’t need to swim all-out during the last length.

At the start of the race, she was an afterthought; at the end of it, the afterthought is everyone else in women’s freestyle swimming. That’s Katie Fucking Ledecky.

She also broke the 400-meter freestyle world record this summer. Twice. And the 1,500-meter freestyle world record. Also twice. The second time, at the Pan Pacific Championships in Australia this August, she took almost six seconds off the world-record pace she had set in June. If, by some catastrophic barrel-fish-eludes-bullet mishap, I have not persuaded you of the basic thesis of this article, please read that sentence again. Or this one: She has personally lowered the world record in the 1,500 by 14 seconds since the summer of 2013. Or this one: She finished the Pan Pac final a slim 27 seconds ahead of the second-place swimmer. Or this one: Her time in the Pan Pac final would have been good for a top-20 finish at the U.S. National Championships … on the men’s side.

Yes, that is Katie Ledecky lapping two swimmers en route to the gold medal. Did I mention that she laps people?

The thesis is that that is utterly wonderful.

You might be wondering why I’m writing about her now, in a non-Olympic year, when she’s back at school and not even swimming in a major event. I have an answer for anyone who’s wondering that, and my answer is this: Pipe down, Horatio; amazing doesn’t keep to your clock. I am writing about her now because lately it’s been too easy to forget that sport is supposed to be a window onto marvels. Katie Ledecky is 17 years old, and she’s one of the best athletes — it’s not an exaggeration — in the history of the world. She is a marvel. Tell me, do you need another reason?