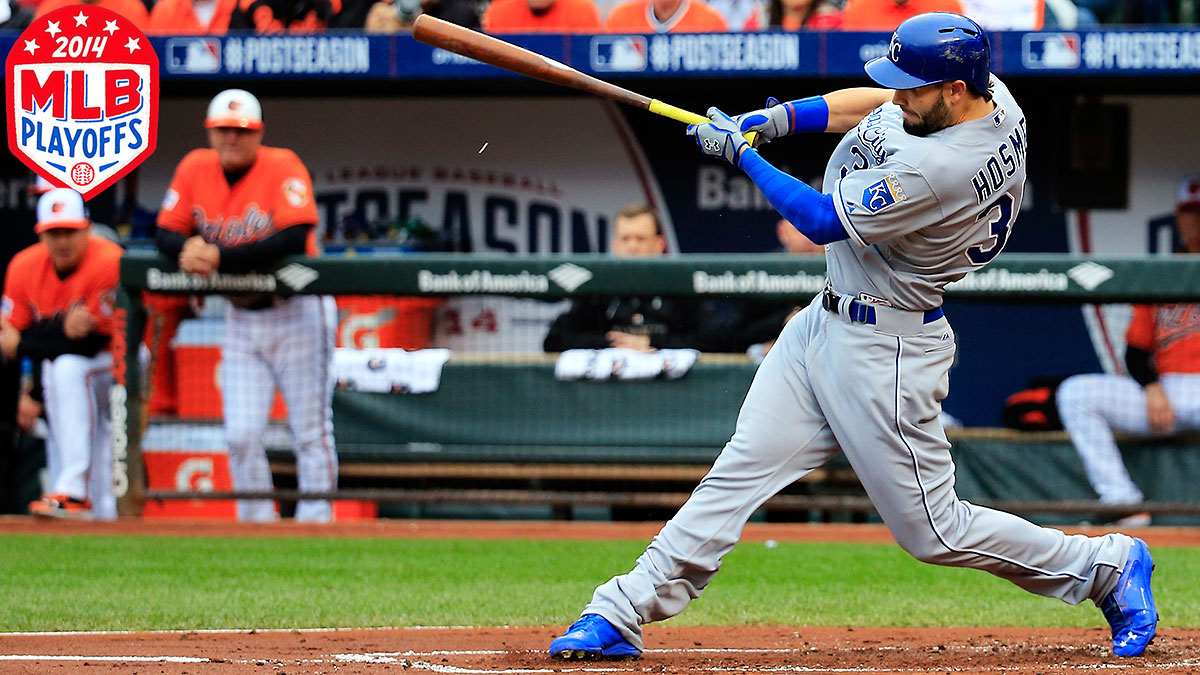 Of all the crazy stats that we can mention about the hotter-than-Hades Kansas City Royals, this might be my favorite: After failing to score eight runs or more in any of their final 39 regular-season contests, they’ve hit that mark in three of their six playoff games. And thanks to that improbably great postseason offense, the Royals are now just two wins away from making their first trip to the World Series since 1985.

For a team that finished the regular season ninth in the American League in runs scored while contending with multiple dead spots in its lineup, this offensive outburst has been mind-boggling. But if we drill down, we can pinpoint four main reasons for the barrage that has shocked the baseball world.

All of our postseason coverage!
The big news is the way they’ve reversed that trend this postseason. Other than the one-and-done A’s, who drew six walks in the wild-card game, the Royals lead all playoff teams in walk rate, drawing 24 free passes in six games. In their big extra-innings win over the Orioles in Game 1 of the ALCS, the Royals bagged seven bases on balls, partly due to the wet conditions and to O’s closer Zach Britton’s inability to find the plate even with the aid of 90,000 GPS devices, but also partly due to K.C.’s improved collective batting eye.

While more walks lead to a better on-base percentage, free passes aren’t the only benefit of a patient approach. Seeing more pitches means getting better pitches to hit, and here, too, the Royals are performing much better in the postseason than they did during the regular season. Pre-playoffs, K.C. ranked 27th in pitches seen per plate appearance, at 3.74. During the playoffs, the Royals have upped that mark to 3.90. While that might not seem like a huge jump, 3.90 would’ve ranked fourth in the majors during the regular season.

The Royals’ improved patience has paid off in multiple ways — from drawing more walks, to wearing down opposing pitchers, to sizing up a given pitcher’s repertoire within an at-bat and setting up a big hit.

Fantasy baseball guru Ron Shandler coined that expression, which essentially means that once a player shows the ability to do something in baseball (hit home runs, strike guys out, etc.), he maintains the potential to show that skill again in the future. That applies to displaying a particular skill in the minor leagues. While phenoms like Mike Trout can spoil us with their ability to dominate almost from day one in the big leagues, the reality is that even minor league superstars can take several years to truly blossom in the majors. Still, those dormant skills often resurface over time.

Which brings us to two of the Royals’ postseason offensive heroes, Eric Hosmer and Mike Moustakas.

That’s serious inconsistency, but the thing is, Hosmer doesn’t turn 25 until October 24. When Bill James studied player age curves, he found that the top of the curve for hitters tends to come around age 27, with peak power sometimes not coming until even later in a player’s twenties, or occasionally in his early thirties. More recent studies suggest that the trend has shifted forward and that, whether due to decreasing PED use or other, tougher-to-pinpoint factors, the mean peak age for hitters is probably closer to 25 or 26. While baseball players very rarely progress along a perfect bell curve, Hosmer may be peaking at the perfect time. And maybe we shouldn’t be so surprised. He has displayed the dual skills of hitting for power and hitting for average at various times, and with nearly four full years and 2,400 plate appearances under his big league belt, he may finally be ready for stardom.

Moustakas, meanwhile, is batting .318 this postseason, with an .864 slugging average and four home runs in 22 playoff at-bats. For those counting at home, that’s one less homer than he delivered in the season’s second half. When it comes to Moustakas, though, we have to dig a little deeper to find a track record to support that success. We won’t find much of it in the majors, where Moustakas has hit .236/.290/.379 in just under 2,000 plate appearances. Though he showed a flash of power in his first full season, cracking 20 homers in 2012, he has struck out nearly three times as often as he’s walked, which doesn’t exactly portend big things. Moustakas, who turned 26 in September, was struggling so badly earlier this season that he was briefly demoted to Triple-A.

Except that once again, looking at the bigger picture is instructive. Once upon a time, Moustakas was an even better prospect than Hosmer, winning Baseball America’s High School Player of the Year award in 2007 after setting California records for single-season and career home runs. The no. 2 pick in the ’07 draft batted .284/.338/.504 in nearly 2,000 minor league plate appearances, struggling at times with pitch recognition but making up for it with prodigious power, including 36 long balls in 118 games across two levels in 2010.

So, like Hosmer, Moustakas has displayed a skill, in his case serious pop. Maybe we shouldn’t be too shocked, then, by his four postseason homers. Still, there’s no denying that the specifics have been impressive and uncharacteristic: His 10th-inning blast in Game 1 of the ALCS, which ultimately gave K.C. its margin of victory, came at the end of a hard-fought, six-pitch at-bat in which he worked Brian Matusz to a full count. All told, Moose saw 25 pitches in five at-bats in that game.

When the two homegrown players in whom a team has invested its highest draft picks start living up to expectations at just the right time, great things can happen … like the first team in major league history to make the playoffs despite finishing last in walks and homers suddenly turning into a patient group of terrifying sluggers.

During the height of the high-offense/PED era, fielding a team full of contact hitters was nice, but it also missed the point. To keep up with the Joneses back then, a team needed a bunch of power hitters, strikeouts be damned; having a roster full of singles hitters who didn’t whiff would still result in a bunch of 7-4 losses. Now, with offensive levels down, power numbers down, and strikeouts up leaguewide, the Royals’ 1980s-style offense, while still not great, can at least compete.

In the playoffs, the Royals have found the sweet spot, combining that same contact-hitting approach with an uptick in walks and a burst of homers. The Royals have fanned 19.5 percent of the time this postseason — higher than their regular-season figure, but still the third-lowest among the 10 playoff teams.3

While Hosmer and Moustakas have raked, another player has provided terrific all-around value: Lorenzo Cain. The 28-year-old center fielder is batting .370/.400/.481 in the playoffs, and is a leading member of the speed brigade that gives K.C. a baserunning edge over all remaining playoff teams. He’s 2-for-2 in stolen base attempts, and he’s a prime threat to take an extra base every time he gets on and sees a ball put in play. He has also played spectacular defense, making multiple impressive running catches, some of them bordering on the impossible.

And, yes, he has put pressure on opposing defenses with his high-contact results, striking out just four times in 27 at-bats. With opposing teams lacking a Cain of their own to catch all of those balls in play, here we are.

To properly gauge how a ballpark affects offensive levels, or how well a certain player defends, or various other facets of the game, you want to gather as much information as possible — ideally three years or more of data. Often, even a full season of data can produce wonky results.

Well, the Royals have played six games this postseason. It’s possible that the team that has cranked eight homers in five October games is the genuine article, and that the one that managed just nine bombs in 26 September games was the mirage. It’s conceivable that the version of Moustakas who hit that pivotal ALCS Game 1 homer off lefty Matusz is the one we should expect to see going forward, and that the guy who’s a career .211/.267/.328 hitter against southpaws is now a mere memory.

If baseball boiled down to crowning the team that had performed better than the rest, we’d end it with regular-season records and abolish the playoffs. Hell, we’d probably also make the regular season 1,000 games long, just to be sure.

Of course, that’s not the case. Instead, we get the drama of the postseason, where the best teams often lose, and where deeply flawed players can suddenly perform like gods. We can dig into the Royals’ offensive onslaught and make some sense of it, but we still need to acknowledge the fickle nature of short playoff series. That’s what October do.

And the Gambling Gods Wept: A Visit to the Meadowlands for Broncos-Jets