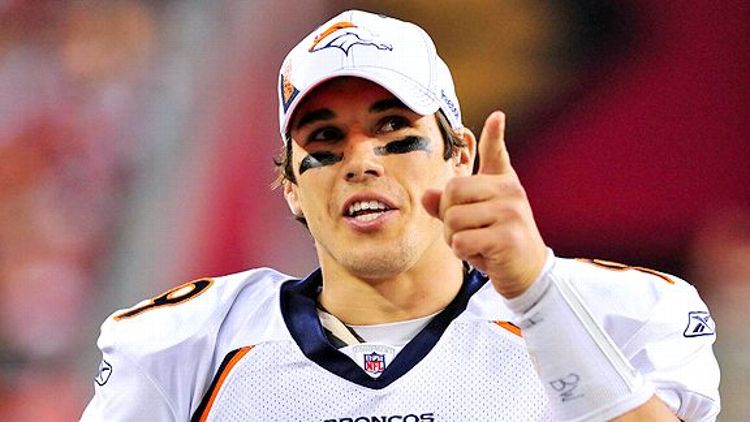 When we had the chance to have a weekly column written by Denver Broncos quarterback Brady Quinn, we jumped at the opportunity. So please enjoy: “Just Quinn, Brady,” The blog of Denver’s Best (Looking) Quarterback.

Hello Hello! Welcome to the first post on my first blog ever!

I am Brady Quinn (AKA B-Quiddy AKA The Bairy Queen AKA Battlestar Qualaxica) and I am extremely amped. This blog is pretty new for me, as I’m not exactly what you would call “tech savvy.” I mean, I just found out about Facebook 12 minutes ago. Accidentally. While looking for videos of people getting hit in the face with phonebooks.

Lot of hub-bub around training camp on who will be the starting QB, so let me just make myself clear: I want to be a starter, and I deserve to be a starter. The numbers from last year don’t lie: 4,017 passing feet, 8 touchdowns, no interceptions. And those are just the completions. Imagine when you factor in every pass I made … some of those figures would be MUCH higher.

Lotta analysts have already aligned themselves with Team Quinn (big ups to Merril Hoge). No surprise there. Take a look at the game tape, it’s easy to see that Te-blow couldn’t pass his way out of a … passing contest thing. Like a thing where you need passes to do well. In fact, LeBron James himself direct messaged me on Twitter today to let me know his positive Te-Blow tweets were “Obviously sarcastic” and that “having biceps look big in a football jersey is nearly impossible … but you pull it off.” I dunno — is King James a cool guy to say you look cut?! (Um. Yeah lol.)

Anyway, training camp means the King of Pranks has returned to his throne!!! First up was telling Correll Buckhalter he’d been released. Kinda felt like a dick move cuz he was just coming back from actually having been released. Shook that off and hid Te-blow’s cleats. You shoulda seen the look on ol’ Timmy’s face when our equipment manager was fired after Te-blow asked where his cleats were. Priceless.

Quick side story: I challenged Te-blow to an Oreo-eating contest today. Was 12 deep before he even DECIDED to politely decline. Winning! Polished off the full sleeve to reward myself.

Another “perk” of being back at training camp means I have the “privilege” of talking to reporters all day. I swear these questions are getting dumber every year. “Hey Brady, where’s Tim?” “Yo man, have you seen Tebow?” “Excuse me, sir, I think you’re lost. This is the women’s room.” It’s like, don’t you guys have better things to do than scream at me while you shit?

Somebody told me today I looked like Justin Bieber got into that Captain America serum. I said, “Yeah, well, you look like somebody hit you in the frickin’ face with a phonebook!” Then I chucked a phonebook at her face. Missed. Good to get this year’s one incompletion out of the way early.

I get a lot of people asking me for fantasy advice. Here’s a quick tip: I would only draft Te-blow in the first round of a Not-Gettin-Laid-Fantasy-League, and trust me, I am in quite a few of those. (12 team, auction, PPR.) Lotta people hyping up this Peyton Hillis dude, but I haven’t seen him on the Broncos since I got here — and don’t tell me he’s on the Browns, cuz he sure as hell wasn’t when I was there. Rumor has it we traded him for some third-rate quarterback but I’m pretty sure we got Te-blow in the draft, not a trade.

Oh, does anybody know how to make a shirt that says “Ask me about my abs”? It’s getting tiresome writing it in permanent marker on all my polos.

Speaking of being funny, I asked Te-blow today, “What airline did you take to Denver — Virgin?” He said “United.” I said “United with Virgins?” and he said “No, Shuttle by United.” Then I said “Shuttle by United with Virgins?” At that point he left the room, but I wanted to hammer the point home. I ran to the door to hurl one more insult but stubbed my toe on a desk. Shit killed. I was legit crying.

All right, it’s time for our running feature: Brady Secrets. I’m gonna open up on this blog, give you guys one secret about me each post. First one is that I get car sick real easily. I can’t read while driving. Not even stop signs. I once read a street sign to see if I was in the right neighborhood (I wasn’t) and fainted. Woke up six days later in Cuba. The whole thing happened in Cuba so I wasn’t really that shocked to wake up there, it was mostly the six days thing that really freaked me out.

All right I should go. My mom called me an hour ago saying she thought somebody was breaking into her house. I logged onto the Net to look up the police station’s phone number in the phonebook and kinda got sidetracked from there.

PS: Who the fuck is Kyle Orton?