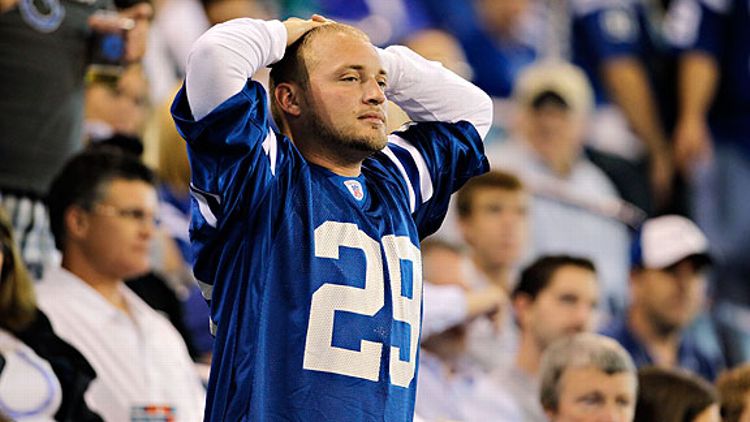 Here’s something I saw in 1998 and was certain I’d never see again: My Giant, starring Billy Crystal and Gheorghe Muresan. And here’s something else I saw in 1998 and was certain I would never see again: Indianapolis Colts fans giving up on their team before Week 3 of the NFL season. While I’m happy to report that I still haven’t given My Giant a second chance, thanks to the absence of Peyton Manning and an 0-2 start, the midnight hour of the Indianapolis apocalypse has already arrived and Colts fans have officially completed the biggest simultaneous jumping off of a team bandwagon in sports history.

Before I go any further and dig my own grave with Colts fans, let me make one thing perfectly clear — I’m not laughing at them, but rather laughing with them. There is no bigger bandwagon Colts fan in the world than me. When I was growing up on the west side of Indianapolis in the 1990s, the Colts were feared by the rest of the NFL about as much as the Olsen twins are feared by Golden Corral owners. So I wasn’t exactly a huge fan. Sure, they had some exciting players, such as Marshall Faulk, Jim Harbaugh, Tony Siragusa, and, um, that one guy (I think he was a receiver or tight end, maybe?), but with the exception of losing a thriller in the 1995 AFC Championship to the Pittsburgh Steelers, they were pretty much irrelevant. So instead of cheering on my hometown team, I decided to instead become a fan of an NFL powerhouse with a storied history of success, which is why I obviously started rooting for the Minnesota Vikings.

Everything changed in 1997, when the Colts sucked all season long, finished with an abysmal 3-13 record, and were ultimately rewarded for their incompetence with Peyton Manning, whom they took with the first overall pick in the NFL draft. Manning’s Colts finished with another 3-13 record in his rookie year, but the team became a Super Bowl contender the next season, which prompted the people of Indianapolis to pile onto the Colts bandwagon in droves. I was initially a little hesitant to secure my spot on said bandwagon, but when Manning was named MVP and Indianapolis made a deep playoff run in 2003 (before eventually losing to the New England Patriots in the AFC Championship), I became a believer and officially began identifying myself as a fan of both the Vikings and Colts. Then, when the Vikings failed to make the playoffs for the third straight year in 2006, I did the unthinkable. I fully converted into a Colts fan. That’s right — I completely ditched my loyalties to my favorite team since childhood for a couple of years because the Vikings weren’t all that great and the Colts suddenly were. I defy you to come up with a more textbook case of jumping on a bandwagon than that without using the words “Miami” or “Heat.”

Having said all of that, I also have no shame in admitting that I am included in the throngs of Colts fans who abandoned ship well before halftime of the first game this year. And make no mistake about it — an unprecedented amount of fans did give up on the entire year less than 30 minutes into the season. It really isn’t hyperbole to say that there hasn’t been a bigger jumping off a team bandwagon in sports history than Colts fans’ collective reaction to the can of whoop-ass the Houston Texans opened up on their team in Week 1. I mean, after seemingly everyone in the city and surrounding areas spent football seasons decked out in Colts jerseys, Colts shirts, and Colts hats for the past decade or so, visible supporters of the team were few and far between when I visited my parents in Indy this past week. Obviously, there will always be a good chunk of die-hards who stick by their team through thick and thin, but it was apparent to me that a great deal of people in Indianapolis had always felt the same way about the Colts as I did, which is to say that they are suddenly letting cobwebs form on their Colts merchandise.

Perhaps the most telling sign of how bad things have gotten is that one of my friends was actually given free tickets to the Colts’ home opener against the Browns on Sunday. This might not sound like much, but keep in mind that when I say he was given free tickets, I don’t mean that one of his friends had a couple of extra tickets and invited him along just because the tickets would have otherwise gone to waste. No, I mean that whoever originally had these tickets decided that they’d rather go see Bucky Larson or something instead of the Colts-Browns game and knew that they wouldn’t get very much money for them if they tried to scalp them, so they just handed them over. Lions fans are probably thinking, “So what? That exact scenario has happened with 80 percent of our fan base every single Sunday for the past 40 years.” But I assure you, this is significant. It’s the sort of thing that would have seemed unconscionable to me as recently as a month ago.

Here’s more evidence of Colts fans struggling to comprehend their team’s demise: My brother attended Sunday’s game at Lucas Oil Stadium. In the fourth quarter, he called me and said a fight had just broken out between two Indianapolis fans who were nearby. According to my brother, the guy who instigated the fight had been cursing at fellow Colts fans for cheering on the Indianapolis defense only during third downs, and remaining virtually silent during first and second downs. I guess the other guy in the fight didn’t take too kindly to getting cussed out just because he wasn’t wasting his time and energy yelling in support of a defense that has given up more than 30 points per game this season. One thing lead to another, and before you could say “Mike Vanderjagt’s frosted tips,” these two guys were throwing down in fisticuffs simply because they forgot what it was like to support a losing football team.

Seeing as how I’m in the same boat as all of these other Colts fans who can’t comprehend what is happening with the team, I’m of the opinion that this state of bewilderment is completely justified because Manning’s neck injury has him out for the foreseeable future. After all, there hasn’t been a single athlete in my lifetime who has been more important to his or her team as Manning is to the Colts. Some would argue that LeBron James was more important to the Cavs, but my counterargument is that Manning actually brought Indianapolis a Super Bowl title, while the only things LeBron brought to Cleveland were a receding hairline, betrayal, and a propensity to routinely waste a significant amount of powdered chalk. Others might argue that Michael Jordan was more important to the Toon Squad than Manning is to the Colts, but to be honest, I’m not completely sold that Space Jam was actually a true story. (If you look closely at the scene in which Jordan goes for the game-winning dunk, you can tell that his arm stretches out further than any human arm should ever be able to stretch — that’s a dead giveaway that it’s fake.) Simply put, for a lot of us fair-weather Colts fans, the Colts without Manning really aren’t even the Colts at all. So I think we’re entirely justified in not exactly being gung ho about cheering for Indianapolis this season. It really is like we’re watching a completely different team even though they’re essentially missing only one guy.

The bottom line is that whether you’re a die-hard or bandwagon Colts fan, hate the Colts or have no feelings toward them either way, there’s no denying that these are dark times and could possibly even be the end of an era for the entire Colts franchise. After a stretch of relative dominance, it appears as though the Colts are on the verge of their first losing season in 10 years. Colts fans are understandably unsure of how exactly to react to this, which explains why some fans are essentially pretending like this season isn’t even happening by boxing up their merchandise and giving away their tickets, and others literally won’t go down without a fight. It’s a completely foreign situation for a lot of Colts fans, especially when you consider that the last time Indianapolis started a season 0-2, Cam Newton was just 9 years old.

But not all hope is lost quite yet. That’s because, if the Colts do the smart thing and completely tank the rest of the season, there’s a good chance that a little Luck will come their way. And if/when that happens, you can bet your sweet ass that I’ll be first in line to jump right back on that bandwagon and ride it all the way to another Super Bowl win.