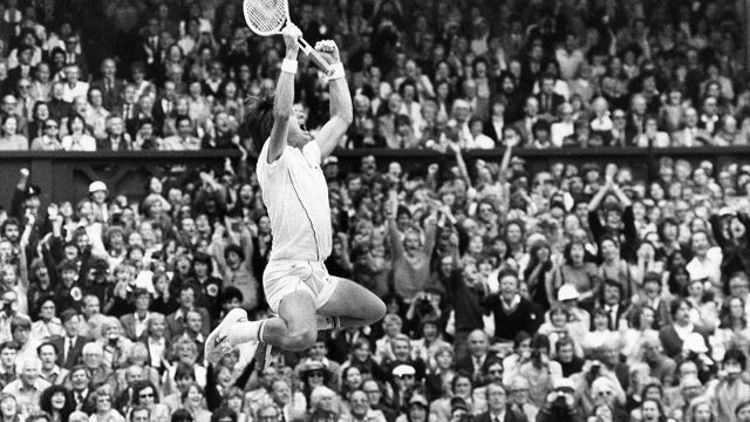 It was like a Springsteen song in tennis whites.

I first met my best friend and writing/directing partner, David Levien, in 1982, during the summer between my sophomore and junior years of high school. This was also the summer I began working at the U.S. Open in Flushing Meadows, slinging clothes for Ellesse and sneaking onto the outer courts to hit with the guys working the food concessions whenever we thought we could get away with it.

Levien came and hung out at the Open a bunch that year. Security was lax back then, so I would get one of my coworkers to loan me a badge, and I’d palm it to Dave within three feet of the gate guards before we both strolled right through.

We grew up about a 20-minute train ride from the Open. We also grew up playing tennis. This was right in the thick of the American tennis boom, which started in the mid-’70s when Jimmy Connors became no. 1 in the world and began duking it out first with Björn Borg and then, a bit later, with John McEnroe.

We were McEnroe guys then; he was close to our age, as smart as he was obnoxious, and anti-authoritarian on the court in just the way we were in school. Connors was obnoxious, too, but without the ironic understanding that Johnny Mac always communicated. While McEnroe’s fury burned mostly at his own inability to transcend himself and the fools surrounding him — and always came off as genuine uncontrolled rage — Connors’s anger was directed outward and had a top note of self-righteous meanness. Even when he made the crowd laugh, it always felt like Connors was manipulating them for his own benefit, lining them up against the umpires, line judges, and his opponents. He used the crowd as a weapon, just like he used his brutal flat forehand and wicked two-handed backhand.

We wanted to hate the guy.

But he was just too good — at all of it. And try as we might, we could not bring ourselves to root against him. (Except when he was playing Mac.) That year it was easy to root for Connors in the finals. Mac had lost in the semifinals to the evil and boring Ivan Lendl and so a victory by Connors would not only be great for himself, it would avenge Mac as well.

Connors won in four sets. Years passed. Borg retired. Mac retired and came back at what seemed like half-strength. Even Lendl retired. But somehow Connors kept going. Long after most Americans had moved on to other enthusiasms, long after he was a top 10 player, Connors still competed.

In 1991, Levien and I, along with the rest of America and most of the world, were captivated by the run Connors, who turned 39 during the U.S. Open, made to the semifinals. I remember watching each match he played in awe. During those two weeks, Jimmy Connors became my favorite athlete in the world.

I still thought he might not be a very nice person. But I stopped caring. I just wanted him to win.

I’m not sure any of this was at the forefront of our minds when, within seconds of getting Bill Simmons’s email asking us to do a 30 for 30, we pitched him Connors in ’91. But I do know that when he said yes, it all came rushing back. And that walking into last year’s U.S. Open with a camera crew felt like a homecoming.

Neither Levien nor I knew what we were going to get with Connors — whether he’d treat our interview sessions like a match, determined to shut us down, or whether he’d be emotionally available and straightforward. What we found was a man who knew exactly who he was, why he did what he did, and was more than willing to explain it all.

In his playing days, Jimmy Connors was a mass of contradictions. He was proudly patriotic yet withheld his talents from the Davis Cup in all but a few matches; generous to his off-court friends but aloof and dismissive to fellow tennis professionals; respectful of the game’s history but not at all of its rules, customs, or mores.

His nature is no less contradictory now. Although I think I have a better understanding of the origins of his rage and competitive ferocity, I still find the window into his character to be opaque. Because while it would be easy to write him off as a villain, a bully, and a tyrant, there is another side to him. More than one former player, while railing against his behavior, demeanor, and attitude toward them, would stop, look at us, and say: “But he took care of Vitas.” Vitas is Vitas Gerulaitis, the late Australian Open champion, contemporary of Connors and McEnroe, and a man who lost his career to cocaine addiction.

The story goes that when Gerulaitis was at the very bottom, given up for lost by all his supposed best friends, that the one person who reached down and got him, put him in rehab, nursed him to health afterward, took him on the road, and beat him back into playing shape was Connors.

We asked Connors about this. And the man who is never shy about celebrating his own accomplishments just looked down and mumbled something about never giving up on your friends, about how you don’t talk about things like that.

There could never really be a Springsteen song in tennis whites. Tennis, and its culture, origins, and rituals, has always been effete, elitist, and exclusive. But if The Boss did create a tennis-playing character, and he wanted to stick to blue-collar white guys instead of Richard Williams and his Compton public court–playing daughters, it would almost have to be Connors, who came from brutal East St. Louis, Illinois, was reared and trained by his single mother, and attacked the game like a cage fighter battling to earn his next meal.

Could Connors have tempered his fury? Could the years have mellowed him, turning him, like McEnroe, into a member of the cultural elite, poking friendly fun at the brat he used to be? You’d think so. But as he so clearly demonstrates in our 30 for 30, that hasn’t happened. Connors remains unapologetic, unbowed, unwilling to accept that any of his actions were unjustified. What mattered to Connors, he told us again and again, was winning. The rest of it was bullshit and whining.

I guess that’s what Levien and I missed about Connors when we were kids. That it wasn’t meanness. It was desperation, desire, and need that came from somewhere deep inside of him, maybe impossible to articulate, but very real. So as you’re watching Connors stomp on another opponent’s throat, almost threaten to rip an ump out of his chair, or refuse to speak to a fellow player years later, maybe it’s worth folding all of it in, not to excuse him, not to glorify him, but to recognize that Jimmy Connors is one of the giants and an original in a game that rarely produces them. Or not. Either way, believe me. Connors doesn’t give a fuck.