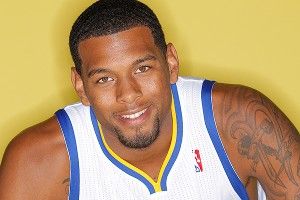 Last night in Oakland, the Golden State Warriors played Maccabi Haifa of the Israeli League in a meaningless game between mediocre teams. Two thousand miles away, I sat in a hotel room and ignored other events of much larger importance, instead clicking refresh every 30 seconds to see the meaningless box score updated over and over again.

I’ll explain. My fascination with Jeremy Tyler, the current Warriors big man and former Haifa benchwarmer, began on August 15, 2009. Three days before, Tyler, then an 18-year-old rising high school senior and a major college basketball prospect, had signed for one year and $140,000 with Haifa. He would not finish high school, at least not yet. He would not attend college, at least not to play basketball. He would fly halfway across the world and make money to play a game, and he would stay overseas until the NBA deemed him old enough to make even more money playing that game, and along the way he would give people who are paid to shout about sports plenty of material to shout about.

I was camping with my wife, a few weeks away from the start of my second year of grad school and a few beers into the afternoon. I wanted to find a big, important story, and in Tyler, I saw all the necessary pieces. Here was a kid with rare talent making an unprecedented and controversial decision, and if I could spend enough time with him and those close to him, then I could write something insightful and beautiful and, if all went well, widely read.

I wasn’t the only one who wanted to use Tyler’s talents and decisions for my own benefit. It’s no secret that athletes are open to exploitation, or that younger pros are especially vulnerable. Like anyone in his position, Tyler dealt with acquaintances who wanted to be friends and friends who wanted to be family, all so they could be closer to a kid who would someday become rich.

But that’s normal. In Tyler’s case, it went deeper. From the moment he decided to leave high school and head overseas, Tyler became less a person or an athlete than a malleable tool to be deployed on both sides of the endless NCAA/amateurism/AAU/entitlement slap fights. Columns were written; opinions were shouted; hands were wrung.

I called around. An NBA executive said Tyler was making a great decision, one that would hopefully pave the way for future players. He gave the typical arguments: There would be no restrictions on practice time, so Tyler could improve faster; he would benefit from playing against grown men and prepare himself for the NBA. A Maccabi Haifa spokesman told me they were thrilled to have Tyler and that they hoped he would help them position the club as the top destination for young and adventurous American talent.

For some, Tyler was a trailblazer who would subvert the established order and forge a new path for young and gifted basketball stars. For others, Tyler was a symbol of greed run amok. “It is all about instant gratification and getting the dollars,” wrote Dick Vitale. For me, he was an excuse to go to Israel and a figure who might turn into a story that would help me get attention, money, and maybe someday, a job.

Using a travel grant from school, I arranged to spend time with Tyler in Israel in December. That fall, other American reporters traveled to Haifa and wrote stories confirming the assumptions of many — that Tyler was entitled and immature.

I flew to Israel, hoping my reporting would produce the narrative I needed to emerge. We’re not supposed to be biased as reporters, but we’re almost always biased toward our own stories, and for mine to be any different from the others, I needed to encounter a Tyler who had matured and improved. I watched him play and practice, I interviewed his teammates and coaches, and then I finally spent time with Tyler before flying back home.

The picture was mixed. He had no friends, no family in town, no reliable means of transportation, and no sense of how to function living alone in a foreign country. I asked what he did for fun. “Absolutely nothing,” he said. He was growing but still immature, improving but still barely getting to play. The comeback narrative I’d hoped for wasn’t there.

I returned to the States and made another round of calls, but by this point, opinions had changed. Maccabi Haifa’s owner, Jeffrey Rosen, said he had been surprised by Tyler’s immaturity. “He could have used some time in the army,” Rosen said, referring to Israel’s compulsory military service. When I asked Rosen what the team would do differently if it had the chance, he said nothing about adjusting expectations or providing resources to help a teenager adjust to life as a professional in a country that’s not his own. Instead, he said, “I would have sat down with Sonny (Vaccaro) and Arn (Tellem) and taken a list of five high school prospects. If we had been looking at a group of five prospects, I’m not sure I would have taken Jeremy.” When I called Vaccaro, he said Tyler would be fine as soon as he grew up, and then he talked about the time he’d brokered Brandon Jennings’s shoe deal.

Both were adamant: It wasn’t the system that was bad; it wasn’t the transition from high school to the pros or the move across an ocean that led to problems. No one had failed Tyler; Tyler had just failed. Many of the people who had a stake in Tyler’s decision to turn pro now seemed eager to leave him behind and focus on the next wave of kids who would bypass the NCAA and go from high school to Israel to the top of the lottery. Certainly, they would succeed.

On the other side, people who had criticized Tyler’s move from the start were now incapable of containing their glee, and it only grew as Tyler spiraled downward. That spring, he head-butted an opponent, left the bench during the middle of a game, and eventually, after being told he would no longer dress for games, quit the Maccabi Haifa team.

So much for maturation and improvement. Tyler’s experiment seemed a failure, as did my attempt to use that experiment for journalistic gain. (The next summer a version of the story ran. It was neither beautiful nor insightful nor particularly widely read, but it was something.) After Tyler spent the next year in Japan, the Bobcats drafted him in the second round — far lower than expected when he left for Israel — and traded him to the Warriors, where he played a starring role last season in the team’s pre-draft tanking.

Maybe Tyler will have a nice career in the NBA. Maybe he won’t. For as much as it has seemed like so many people around Tyler exploited his gifts for their gain, it also seemed like Tyler was still figuring out how best to use his gifts for his own benefit. He talked about his talent as if it existed outside of himself, as if it were something he could use to fuel the things he, at least at the time, truly cared about: singing and writing music, spending time with family and friends. (He has, by many accounts, grown to love the game — or as one of his Japanese-league assistant coaches explained to me, grown to understand the work it takes to last in the NBA.)

Whether or not Tyler succeeds in the league, it’s nice to see him as he now is: No longer a pawn in arguments that have both predated and outlasted his time in the sports-media vortex, but just another young NBA player trying to earn his place in the league.

Earlier this week, I requested an interview with Tyler for this post. Tyler “would much prefer to look forward with this season and his NBA career than look back,” a Warriors spokesman wrote in an e-mail. Tyler is now 21 years old and technically an NBA veteran. His failures are no longer scrutinized as symptoms of a broken system, nor are his successes hailed as harbingers of a more liberated era. When given the chance to look back on a time when none of that was true, Tyler, according to the spokesman, wanted “to respectfully decline.”

I don’t blame him.