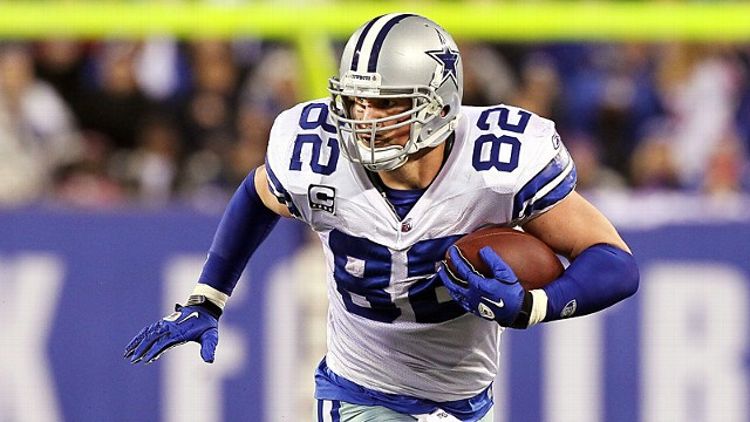 For years, the Cowboys have been nothing if not erratic. Whether it’s quarterback Tony Romo’s on-field inconsistencies, the vacillations of owner Jerry Jones, or the propensity of a very smart head coach (Jason Garrett is a Princeton grad who scored a 36 on the Wonderlic test) to make silly in-game decisions, Dallas has all too often seemed like a team that just cannot get out of its own way.

The exception — the Cowboys’ one consistent bright spot over the last several years — has been tight end Jason Witten. Witten has caught more than 90 passes in four of the last six seasons, including 110 last year, despite battling injuries and having to catch passes from both Good Tony Romo and Bad Tony Romo. Witten is not the vertical threat he once was, as his yards per catch dipped below 10 last year for the first time since his rookie season. But his game is like a veteran NBA power forward: working the underneath areas, always hitting the open 15-footer, and making up for what he lacks in raw speed with an incredible combination of power, balance, and practiced, nuanced agility.

What makes Witten special is how he uses a natural knack for getting open at football’s highest level. It’s a backyard principle that he’s made work in the NFL, primarily with what is known as an option route. As its name implies, receivers on an option route don’t just run x-many yards and simply break in or out. Instead, they have several choices within the same play, all depending on what the defense does. For the Cowboys, Witten’s “routes” are often a suggestion: Just get open.

Although hardly new, option routes and related route conversions have only recently come to dominate NFL offenses. The vaunted West Coast offense was the most popular attack in the league for roughly two decades and gave receivers relatively little flexibility to adjust to defenses. Those offenses still feature the ideals of Bill Walsh’s creation, but almost every pass play in the NFL sees at least one receiver — and often two or more — reading the defense and adjusting his route on the fly.

While many offenses feature route conversions that require three or four receivers each reading the coverage and making a decision based on specific keys, Witten does most of his damage with the original read-the-defense pass play — the option route. Compared to route conversions, an option route is actually pretty basic: The outside receivers run some sort of deep or clear-out route while an inside receiver, such as a running back or tight end like Witten, is given plenty of freedom to get open underneath.

Despite its backyard beginnings, there are specific coaching points on an option route. The first thing Witten must do is identify the defender over him and attack that defender’s leverage on his release from the line, typically by running directly at him. By running right at that defender — which is usually a linebacker or safety — Witten forces the defense to reveal how it is playing him. There are basically two things that can happen: The defense will either play zone or man-to-man. This does not always mean that what Witten identifies is literally what the defense has called, particularly in an NFL with increasingly complicated coverages, but by classifying them this way Witten is able to cut through the confusion and defeat whatever technique he faces.

Although the Cowboys’ loss to the Giants last fall was an ugly, bizarre affair — Romo threw three first-half interceptions as Dallas fell behind 23-0, before the Cowboys ultimately squandered a brief 24-23 fourth-quarter lead — Witten put on an option route clinic en route to catching an incredible 18 passes. In the second quarter, the Cowboys lined up in a three-receiver, one–tight end set, with Witten to the right. The Giants, meanwhile, ran a Tampa Two coverage, in which two safeties drop deep to the outside while the middle linebacker drops deep to the middle.

On this play, although the defense is in zone, the linebacker plays Witten so far inside that Witten basically treats it like man-to-man and breaks open to the outside. The other defenders have been run off, and it’s an easy throw for Romo on a night when not much was easy.

Later in the game, the Cowboys came back to the option route, only this time the Giants played Cover Two Man, with two safeties deep and everyone else playing man coverage underneath. Going against a nickel defensive back, Witten ends up with inside leverage, so he plants his foot and breaks inside.

From the end zone angle you can see how Witten releases outside, directly at his defender, and gets him to move his feet. This sets the nickel back up for the inside break Witten makes at the top of the route. Once Witten has broken inside, he’s in full power forward mode: The defender is simply boxed out from having any chance at making a play. Witten has become a master at the subtle techniques of making this multifaceted route work.

Option routes can only be coached so much. There have been prolific receivers who struggle with them, and there have been others who were otherwise middle-of-the-pack players but excelled at just getting open. A receiver is either a natural option route runner or he’s not. Witten is a natural, as Garrett said recently, and I have little doubt that talent — among his others — will one day land him in the Hall of Fame.