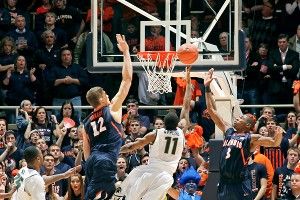 On Tuesday night, Michigan State and Illinois played a basketball game, and the score was 42-41.

That was the final score. Two Division I teams that will both make the NCAA tournament were scarcely able to crack the 40-point barrier. And if you’re curious about who won, the correct answer is: nobody.

When I started writing this piece, I was hoping the stats would show that the pace of play in college basketball has gone way downhill over the last decade or so. I knew I was at risk for selection bias, but it seemed like I’d noticed teams essentially playing stall ball from the first minute this season. We’ve watched Virginia rise into the top 20 by playing the fourth-slowest pace in Division I. Everyone already knows about Wisconsin and the slogs it produces. Harvard was able to beat Florida State 46-41 due in part to their ponderous tempo, and it’s been an epidemic throughout the Big Ten this season.

But anecdotes do not make a trend, so it was time to look deeper. This season, the national average for D1 squads is 67.16 possessions per game, which means that in a world with no offensive rebounds, teams would take approximately 18 seconds to shoot on the average possession. (Here’s the math: 2,400 seconds in a basketball game divided by 134.33 total possessions.) Since there are 22.46 combined offensive rebounds per game this season, we’ll add that to the total possessions, and find that teams only need 15.3 seconds to put up a shot, on average. Remember that number.

And how does that compare historically? Here’s a handy chart, from the brilliant minds at StatSheet (who I swear don’t pay me to shout their praises — they’re just that good), showing the decline in possessions per game since 1996.

Not surprisingly, points per game has followed a similar trajectory:

At the peak in 1997-98, teams took a full second less to shoot on each possession. The numbers on StatSheet only go back so far, but my suspicion was that if you traced them to 1985 (when the shot clock was adopted by the NCAA), both lines would keep going up. Data for possessions wasn’t available, but the averages (page 44) confirmed the theory: Team scoring reached a peak between 1989 and 1991, getting as high as 76.7 points per game. It’s been declining ever since, and is nearly 10 points lower this season.

There are two points I’d like to make before continuing. The first is important: I don’t blame anyone for playing slow. It’s a great equalizer, and that works both ways. It elevates mediocre teams into the single-game realm of great teams, and it lowers them into the single-game realm of poor teams. For coaches, it’s all about winning, and you can hardly criticize them for taking any means within the rules to accomplish that end.

Let’s look at a couple scores from our two exemplary stall-ballers, Wisconsin and Virginia.

As you see, both teams were capable of staying very close with some of the best teams in the country (Duke and UNC), and they did it on the road. Impressive. On the other hand, they also played close games with some relatively poor teams. As Michael Weinreb noted earlier this week, Towson had lost 41 straight games until very recently and was considered the worst team in college basketball. Tony Bennett’s Virginia could only beat the Tigers by seven at home, and a loss would have been an unspeakable humiliation for a top 25 team.

But that’s what slow play does. And if you can execute well, as Virginia and Wisconsin do, it lets you triumph over the bad teams and stay close with more athletic teams like Duke and North Carolina. Occasionally it will result in an upset. That approach hasn’t been shown to succeed in the NCAA tournament on a broad scale, but it’s certainly been effective within conference play. Those teams, and their coaches, are not at fault.

The second point I’d like to make is that taking advantage of flaws in the game is nothing new in sports. Before the forward pass was invented, teams would grind out slow, brutal football games that can’t have been very exciting to watch. In baseball’s deadball era, pitchers would manipulate the ball until it was distorted and practically invisible as run production flatlined. NHL teams in the ’90s and early 2000s would take advantage of archaic rules to play a low-scoring, defensive style.

None of the offenders were wrong. They were just boring. And if sports are boring, fewer people want to watch. In every case listed above, rule changes were made that altered the game and made it more exciting. The forward pass helped make football the nation’s most popular sport. A livelier, more visible ball led to a scoring boom in baseball that boosted ticket sales and vaulted the game into the national consciousness. When the NHL instituted a slate of rule changes in 2005, it produced the highest-scoring season in league history.

Aesthetics matter. And basketball has not been exempt from the history of transformation.

I dug up an old UPI article printed in the Florence Times, of all places, about a drought in NCAA basketball scoring. It was written in 1982 and included this quote from legendary St. John’s coach Lou Carnesecca:

“Teams start putting the ball in the ice box with 10 minutes left and that brings the scoring down,” says Carnesecca, referring to the delay game. “I think the scoring will continue to go down unless there is a 30 or 45-second clock. If you can’t get a shot in 30 or 45 seconds, you won’t get one in 100 seconds.”

“Coaches think that a clock will take away their brains. Coaches feel they have to control the game. There is some truth in that but then don’t charge admission. People don’t want to see the coaches, they want to see the players.”

Precisely. What was effective for the coaches back in 1982 wasn’t effective for the sport. That’s why rule changes have been instituted in almost every major game in the last century. Appeal is paramount. A few years later, a 45-second shot clock was adopted in the NCAA, and in 1993 it was lowered to 35 seconds. In addition, scoring was boosted with the addition of a 3-point line. Do you know anyone who complains about the shot clock or the 3-point line today?

And by the way, what do you think the scoring average was during that 1981-82 season, when the awful drought inspired a movement that would lead to a revolutionary change in the game?

At the halfway mark of the season — four years before the 3-pointer was instituted, in the total absence of a shot clock — teams were scoring a combined 135.38 points per game. This year, they’re scoring 135.74.

It’s time for another change. The agents of boredom have overcome the restrictions of a 35-second clock, and that’s not good for anyone. Pardon me while I paint with broad strokes for a moment — sports are as much about the display of athleticism and talent as they are about winning. The two elements have to be balanced. If we just wanted a measure of the former qualities, without bringing much strategy into the mix, we’d simply watch the 100-meter dash or the high jump. But when the rules allow for an ungodly amount of control to be exerted by the strategists, to the point where it diminishes the intent of the sport itself, that’s going too far in the other direction.

The scoring decline, bringing the average down to pre-shot-clock levels, is proof enough that 35 seconds is too much time for a modern shot clock. Basketball is a game of tempo and systems. At the moment, the systems are swallowing tempo. Fans are being deprived of pace and talent at the expense of control. You can’t blame Bo Ryan or Tony Bennett. In fact, you can even admire the way they’ve used the rules to build excellent programs.

It’s time for the players to emerge from that mire. The rules have changed before, and they need to change again. Twenty-four seconds is plenty of time. It will improve the game without causing any damage, and we’ll all be happier. Don’t think of it as a revolution; think of it as a necessary repair.