Is This Real? The Incredible Mr. Sanchez 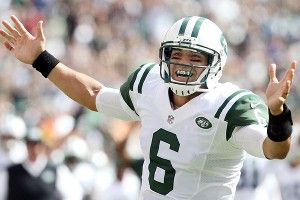 On Wednesdays during the 2012 NFL season, we’ll be filing a new column called “Is This Real?” to the Triangle. You can probably guess what a column called “Is This Real?” is about, but for the unadventurous among us, this weekly piece is going to take a look at some player, team, or aspect of performance that’s been surprising and gauge how likely it is to keep happening over the rest of the year. Sound good? Not really? Well, we’re doing it anyway.

This week’s topic is Mark Sanchez and the newfound passing attack of the New York Jets. After going the entire preseason without scoring an offensive touchdown, the Jets promptly dropped 48 points on the Bills in Jersey on Sunday. That performance was paced by Sanchez, who had what was arguably his most efficient game as a pro, going 19-of-27 for 266 yards with three touchdowns against a lone interception. After serving as a punchline for most of the offseason, Sanchez was every bit the franchise quarterback the Jets paid for on Sunday. So, then, was Sanchez’s performance for real? And will the Jets be able to throw the ball like this in future weeks?

Let’s start answering that by pointing out an obvious-but-forgettable fact: There’s more to a good aerial attack than a quarterback. Certainly, the quarterback has the biggest role to play in any successful passing offense, but it wasn’t just Sanchez struggling in August; his receivers were dropping passes and missing practices, and as Jets fans have been trying to forget, they lined up professional turnstile Wayne Hunter at right tackle for most of the preseason. The team traded Hunter to the Rams for fellow bust Jason Smith before the season began, but with Smith still learning the playbook, new offensive coordinator Tony Sparano inserted former Eagles tackle Austin Howard into the lineup at right tackle. If the Jets were going to be able to keep Sanchez and Tim Tebow upright when they dropped back to pass, Howard was going to need to hold his own on the end.

On Sunday, that’s exactly what happened. More than anything, what was truly notable about the Jets passing game was how much time and space Mark Sanchez had to throw. Buffalo’s collection of dominant defensive linemen wasn’t able to sack Sanchez once in 28 drop-backs, and they only forced him to scramble on a single occasion. Even a generous description of the word “hurry” would require just one hand to count the number of times the Bills bothered Sanchez in the pocket.

Notably, that applied to the specific matchup in which you would expect the Bills to have a significant advantage. Across from Austin Howard for most of the game was free agent catch Mario Williams, making his debut in a Bills uniform after signing a mammoth deal with the team during the offseason. Williams was supposed to benefit from the talent of players like Marcell Dareus and Kyle Williams next to him, freeing Williams up from double-teams and giving him the opportunity to beat up overmatched tackles in one-on-one situations. Well, Williams got plenty of one-on-one shots at Howard (the tackle estimated afterward that he was alone versus Williams on 50 percent of the Jets’ offensive snaps, but it was the guy playing in just his fifth NFL game who won most of those battles. Howard was able to neutralize Williams on every one-on-one situation short one, in which Williams beat Howard and knocked Sanchez down as he threw. It didn’t stop Sanchez from completing his pass, though, and it was the closest Williams came to Sanchez all day. The Jets also got an excellent day from left tackle D’Brickashaw Ferguson, who came in for some criticism from Jets fans last year, as he managed to limit Mark Anderson to a single quarterback hit on the other side of the line.

What Sanchez did with that free time was nothing short of revelatory. It’s always dangerous to take your feelings about a player and project them onto his performance on the field, but Sanchez definitely looked like a more comfortable, confident passer on Sunday than he had either during the preseason or toward the end of the 2011 campaign. His throws were strong and well-timed, coming out on a rhythm at the end of his drop-back. Outside of his interception, he really didn’t have a challenged throw or a break that he was lucky to get away with; he was hitting open receivers in stride or throwing covered receivers open with passes into space.

Sanchez created his first two passing touchdowns of the day with pump fakes and double moves. In each case, he was able to do so with time granted by the offensive line and the anxious, chattery feet of the Buffalo secondary. Much as we wrote regarding the Saints yesterday, the Bills are an aggressive defense that relies heavily on creating turnovers. Sanchez’s pump fakes and the routes of his receivers were able to freeze cornerbacks Leodis McKelvin and Stephon Gilmore, the latter making his NFL debut, creating space behind them for scores. Sanchez almost exclusively picked on that pair, leaving starter Aaron Williams alone for most of the day.

And those receivers! It was a very nice day for a much-maligned crew. Second-round pick Stephen Hill, the subject of some well-placed doubt by Rex Ryan, was an absolute monster at times. On Sanchez’s second pass attempt of the game, Gilmore tried to jam Hill at the line, only for Hill to knock him so far backward that he created an easy completion for himself. After that, Gilmore stopped jamming as much. Hill moved around the formation and even picked up a first down on a Darren Sproles–style two-way route out of the backfield. Imagine a 6-foot-4, 209-pound Darren Sproles. Bit parts like Jeremy Kerley and Jeff Cumberland also played big roles against the Bills; Santonio Holmes was truthfully an afterthought, and his initial first down came on a play in which he ran the laziest route in recent memory by sauntering forward and just parking himself at the sticks. Buffalo’s zones were so slow to react that even a lackadaisical Holmes could get open.

Of course, there’s some stuff in there that we know won’t stick around. The Jets converted 10 of 14 times on third down, recovered each of the three fumbles that hit the ground during the game, and scored on an interception and a punt return before the game got out of hand. That must have felt good for a team that allowed seven defensive touchdowns last season.

Sanchez also didn’t have a flawless game. During those rare times when the Bills did get pressure on him, Sanchez’s accuracy waned dramatically, with throws that had previously hit a receiver in stride now showing up at their feet. He picked up an interception by trying to do too much, bouncing a shovel pass off of Cumberland’s arms at high speed on a desperate third down and creating an easy pick for the Bills. He also fumbled on that aforementioned scramble, a far-too-frequent occurrence for one of the league’s most frequent fumblers.

So, is Sanchez’s performance for real? Yes and no. It’s going to be difficult for the Jets to keep him this unmolested in the pocket all year, as there’s just simply going to be a player or two who gets through per game and takes Sanchez down for a sack. That’s reality. What the Jets showed on Sunday, though, is that they have an offensive line capable of winning the pass-blocking battle versus an elite defensive line. And when they were able to do that, Sanchez was consistently able to make good decisions and well-placed throws. So, pending the offensive line — especially Howard — this one’s actually a tentative “Yes.” Don’t be surprised if the Jets passing offense is better than you think in 2012.