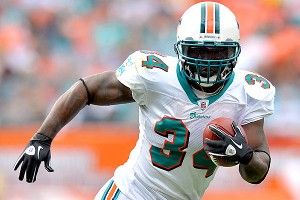 Baltimore Ravens running back Ricky Williams announced his retirement on Tuesday, much to the dismay of football fans, potheads, and yoga aficionados everywhere. His decision also sparked a Grantland office debate over whether the 34-year-old Williams, who spent 11 seasons in the NFL, was overrated, underrated, or properly rated. Here are the results.

Bill Simmons: I have Ricky Williams as underrated — five 1,000-yard seasons, posed for the only iconic ESPN Mag cover, starred in a quality 30 for 30, nearly lost his career because he liked pot so much, put Dan Le Batard on the map, successfully pulled off the shaved head look and the dreadlocks look, was nearly run into the ground by Dave Wannstedt and Dave Wannstedt’s mustache (775 carries and 3,225 yards in two years), somehow finished with 10,009 yards on 4.1 yards per carry.

Chuck Klosterman: Ricky Williams compiled nearly 13,000 yards from scrimmage despite missing two of his best potential seasons and never focusing on football. In one three-year span, he had 157 receptions, yet is rarely remembered as a pass-catching RB. On the downside, his career per-carry average is 4.1 (and he was prone to fumbles). He is accurately rated as a running back, mildly underrated as an overall football player, and probably overrated as a yoga instructor.

Chris Ryan: Ricky Williams will always be underrated simply because his wandering the earth like Caine in Kung Fu, his predilection for the medicinal uses of certain herbal glaucoma medications, and his stop-start pro career will forever overshadow the fact that Master P was at one point involved in his contract negotiations. Not enough people still talk about this.

Michael Weinreb: Underrated. I cannot think of an NFL running back who led a more intriguing off-field life (and was not tried for murder).

Bill Barnwell: Ricky Williams is a little overrated. Yes, he hit the nice round number of 10,000 yards, and his 2002 peak season was otherworldly, with 1,853 rushing yards and 17 touchdowns for a Dolphins team starting Jay Fiedler and Ray Lucas at quarterback. That’s also his only truly great season, as he was more of a yard compiler without many years where he seriously affected his team’s performance. Refreshingly weird dude, but rarely a dominant football player.

Joe House: Master Yogi Ricky is waaaaay too unique a cat for a single label. So I’m going with all three.

Overrated: Mainly by himself. And Master P. Arguably worst rookie-contract in the history of the NFL, Percy should have been required to give Ricky his gold sinks as reparations.

Properly rated: Best Hindu to ever play the game, a rare Heisman winner who had a pro career that didn’t smell like an “occupy” camp.

Underrated: His performance-to-marijuana-consumption ratio will never be duplicated, Robert Parish-esque. Incited Joe Theismann to say things that were dumb even by Joe Theismann standards. About the CFL, to boot! Ensured Mike Ditka would never hold another NFL job.

I enjoyed Ricky, and wish him good luck in his pursuit of Mantra.

Sarah Larimer: Totally underrated, both as a football player and massage therapist. OK, fine. I’m just guessing on that last one.

Mike Philbrick: Ricky Williams was a terrible combination of two people. Mentally, he was a freethinker who just wanted to turn on, tune in, and drop out. Physically, he was born to be a bad-ass football player. The few times he was able to turn off the former and go full throttle with the latter, he was the best on the field, and for that he is underrated.

Mark Lisanti: Properly rated. Ricky Williams had the pre-draft hype, the dreads, the social anxiety disorder, the visor, the big years, the missing years — with so many ups and downs, his rating averages out to a proper, natural level. Also, the weed really evened him out.