Is Justin Blackmon Really 6-foot-1? (And Other Questions About Oklahoma State’s Star Receiver) 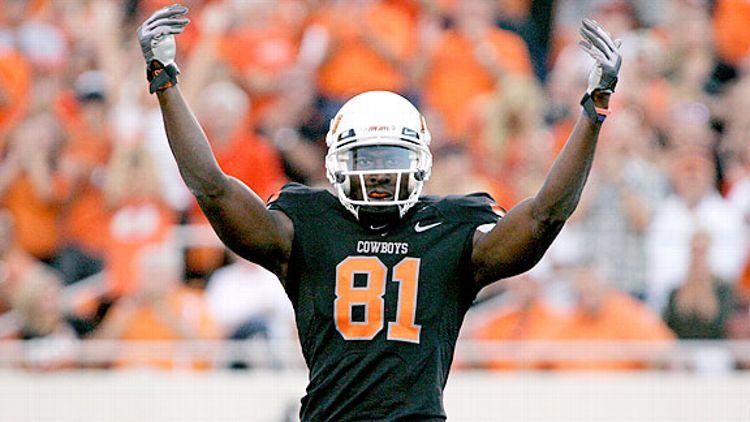 While some of us (this guy) subjected ourselves to a 9-6 final during the Game of the Century two weeks ago, others took in what might have been college football’s real game of the year, as Oklahoma State and Kansas State combined for 97 points, more than 1,000 yards, and no defense as the Cowboys downed K-State, 52-45. As he’s done all year, Oklahoma State wide receiver Justin Blackmon just did some silly things (13 catches, 205 yards, two touchdowns) as the Cowboys took one more step en route to the national championship game. Today on Grantland, Brian Phillips wrote that the best way to experience Blackmon’s dominance is to just take it all in. But there are some who have a different appreciation for Blackmon’s talent. We spoke to a few cornerbacks about what it’s like to be tasked with stopping the best wide receiver in college football.

When you were through with a couple of series, what’s the one thing that had surprised you most?
Tyler Patmon, Kansas: I mean, the guy really doesn’t talk, which surprises me. When you see his highlights, it looks like he celebrates a lot, but that’s one thing he doesn’t do.

Nigel Malone, Kansas State: His focus. I think for a lot of people, the first thing that would jump out at them is his athletic ability. That’s something that does stand out, but the underrated thing about him is his focus. When you go out and play against somebody one-on-one like that, you really get to measure somebody, and the intensity and the focus I got from him you expect, but in the game, it’s different. It’s something you can feel, and he has a great amount of it.

You never knew when it was going to be a run and a pass. Deep down, a lot of receivers just want to focus on the ball. Blackmon is going to get on you and grind you. Even it’s a toss play the other way, he’s going to try to get his hands on you. That separates him from a lot of guys I played against.

Carrington Byndom, Texas: He’s not as tall as I thought he would be. But you can definitely tell he’s a physical guy. You can tell why he’s one of the best receivers in the nation. He just always finds a way to get open. He’s a playmaker. You can’t tell that before, but once he starts playing, it’s obvious.

He’s listed at 6-foot-1. That can’t be right, can it?
Byndom: It definitely seems like he’s 6-foot-5 or 6-foot-6 — going up and getting passes, using his body to shield off defenders. He uses that frame really well.

Down in the red zone, where quarterback Brandon Weeden likes to throw that fade pattern to him in the corner of the end zone — how do you even try to stop that?
Byndom: You’ve got to force him to do one thing or the other. He can beat you with the fade, or he can beat you with the slant. It’s a challenge, for sure. He does use his body so well. You’ve just got to try to take away one thing.

Trevin Wade, Arizona: It’s all about being smart. Sometimes being physical will get you murdered near the goal line. All he needs is three or four steps to the end zone. You can be physical all you want, but as soon as he gets one step around you, there’s the ball. You’ve just got to be smart and play the hands — as soon as he goes up, rip the ball out or rip his arms down. Most corners panic and jump up, but that’s not doing anything.

Malone: That was one thing that [I noticed]. You think they want to throw fades to him all the time, but he’s a complete receiver. He can run every route. The fade is just one thing in his arsenal that he has.

After playing against him, where does he stack up among the best receivers you’ve had to cover?
Patmon: It’s probably between him and [Oklahoma wide receiver] Ryan Broyles. They’re just great receivers.

Byndom: He’s definitely up at the top. Throughout the game, you can just tell what makes him so good.

Malone: It’s him. After that game, it’s him. As an overall player, what he can do on the field, it’s something that’s unmatched in football. Even from what I’ve seen on film and other things. Playing against him is different than what people have seen. Until you’ve gone out and played against him, you can’t appreciate some of the things he’s done on a football field.

Previously by Robert Mays:
The Twilight of the Andrew Luck Era at Stanford
LSU-Alabama: College Football’s Biggest Day
Does Missouri fit in the SEC?