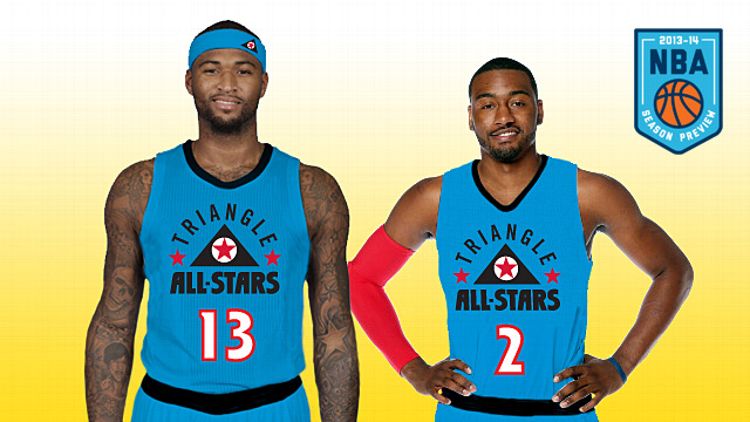 The Triangle All-Star Team is a way for the Triangle blog to celebrate our favorite players. Today: We begin with John Wall and Boogie Cousins.

Chris Ryan: In today’s NBA, every aspect of a player’s game is there for us to evaluate. Every mistakenly taken midrange jumper is there on Synergy or can be visualized in shot charts. Seemingly disconnected plays can be edited together to paint a picture of a poor defender. If you want to know how someone plays well with others, five-man unit stats give human interaction a statistical value. Sooner or later, we’re all going to be like that Russian sub navigator in The Hunt for Red October, telling our friends, “Stop pissing, Yuri. Give me a stopwatch and a map, and I’ll fly the Alps in a plane with no windows.”

Well, screw that. These are the Triangle All-Stars: the we-don’t-care-what-people-say players. These players bring us the most joy, regardless of whether it’s rational. We cheer for these players despite their flaws, or even because of them.

We’ll be following and updating you on this group all year long. So if you see a disproportionate number of posts on these guys, you know why. But now, with the regular season right around the corner, we thought it would be the perfect time to introduce you (or reintroduce you, in some cases) to the Triangle All-Stars.

Andrew Sharp: Chris explained the spirit of this roster and managed to quote Tom Clancy, so we’re pretty much done here. But as far as specifics … the only real criteria for selection was that none of these players could be actual All-Stars, and they couldn’t be too mainstream as cult heroes (e.g., Z-Bo, Metta, et al.). Mostly, this is all just an excuse to get ready for the NBA by celebrating a handful of players we love way too much. And no, we did not actually design the jerseys ourselves, but shout-out to the 1996 Eastern Conference All-Stars. They blazed the trail; we’re just walking it.

We’ll roll out two new players every day for the next week or so, and we begin with the starting lineup and two long-lost brothers. Chris wrote about John Wall and I wrote about Boogie. Enjoy.

Why We Love Him: You cannot second-screen John Wall. You can’t check Twitter, watch an old episode of Parks and Recreation, or play FIFA while the Wiz are on. He may not be an elite player yet, but in terms of being must-see TV, Wall is up there with LeBron, Durant, Rose, Kobe, Westbrook, and Griffin. You never know what’s going to happen. I’ve seen him live once, against the Clippers. During a random play, early in the game, the kind you would totally space out for, I happened to just zoom in on Wall (I was probably ball-watching). He was about 10 feet behind the half-court line when he did a little hop, while still dribbling, and galloped past Eric Bledsoe (who is not exactly a hermit crab when it comes to speed). Wall finished at the rim. It took him three seconds and five strides and it was one of the coolest things I’ve ever seen on a basketball court. After that, I made sure I was Wall-watching whenever he was on the floor.

This story (admittedly not the most entertaining one) is pretty typical. When something cool happens with Wall, it usually has to do with speed. Wall is really fast. That’s why he’s so cool. It doesn’t have to be that complicated.

That’s insane. That’s a one-man, six-seconds-or-less offense. Most NBA players are, in some respect, fast. But nobody in the league is fast in the way Wall is. It’s not just a physical trait, it’s a skill … a weapon. He knows how to use it, and he always has:

Everywhere he has gone, a ton has been expected of him — big-time high school recruit, Kentucky basketball savior no. 3,234, top overall draft pick, immediate Wizards franchise cornerstone. His personality seemed a little canned, like a child actor who had been instructed his whole life how to answer questions. And you could see why that would be. Whenever he would do something remotely interesting — like do the Dougie during player intros — a shitstorm would flare up.

Now that he’s settled in Washington, with no more stops to make (at least for the foreseeable future), we’re starting to get to know him a little bit. My personal favorite Wall moments include him throwing out the worst first pitch in baseball history:

Reports out of Wizards camp are that Wall has become a more vocal leader on the team. Don’t believe me? Listen to Al Harrington: “I’m trying to see what kind of player he is to the core — and so far, he’s a beast. He’s an animal. That’s the kind of guy you want in the fox hole with you.”

Foxhole! I feel like we’ve only gotten hints of how cocky, amusing, and passionate this guy is. We’re going to see a lot more of it, provided he plays slow enough for us to follow.

Why Some People Don’t Love Him: Because he takes long 2s? Because he’s on a max deal? Because he spent a lot of time in Las Vegas this summer? Because he poses for Instagram pics with rappers? Because he hasn’t played like a no. 1 pick?

Anecdote That Only Makes Us Love Him More: I mean, I really enjoy the unlimited “What housing crisis?” swag of his eight-bedroom, 12-bathroom mansion, but really the moment that’ll draw you into Wall is another one of those more frequently occurring scenes where he lets people see the real him.

During the press conference to announce his new, five-year, $80 million contract, Wall spoke vulnerably about his childhood, the death of his father, and the sacrifices his mother made growing up. We joke a lot about bad contracts and debate whether certain players deserve certain deals, and it’s all so abstract, like it doesn’t affect lots of people and change lives for the better.

Wall has posed for hundreds of Instagrams with rappers over the course of the offseason. He is the best at making your favorite sportswriter very concerned.

Final Word/2013-14 Projection: John Wall is going to the All-Star Game and the Wizards are going to the playoffs. Get onboard.

Why We Love Him: There are two types of basketball fans in this world — those who love DeMarcus “Boogie” Cousins, and those who are wrong. Players like Boogie make basketball more fun. If every big man were Tim Duncan, this sport would be awful. We love Boogie because we don’t care about defense, don’t care for authority, and don’t care if he’s a little out of control sometimes. DeMarcus Cousins would throw an elbow at Jesus Christ himself, and that’s why he’s so much fun. No, he has never put his massive skill set together for an entire season while unleashing hell on the NBA, but he has also been stuck in some awful situations the past few years in Sacramento.

The takeover is coming, though. In the meantime, we have highlight tapes like this — in the first 60 seconds of that video he goes coast-to-coast three times, posterizes Danny Green and Duncan, and destroys Anthony Randolph’s soul.

You say he’s constantly out of position on defense.

But you don’t score points on defense, do you?

Watch Cousins for 48 minutes and you’re guaranteed at least six or seven plays in which he looks completely unstoppable and destined to dominate this league for the next decade, six or seven plays in which he looks too immature to ever prosper in the NBA, and no fewer than 150 scowls in between. And probably a technical thrown in there somewhere. He’s not perfect, but that’s what makes him great. You never know what you’re getting with Boogie, and it can change on any given possession.

Anecdote That Only Makes Us Love Him More: Boogie can play in our charity game anytime:

Baby Shaq, a former member of the famous “And-1” basketball team, led the Sweat Mob with 34 points in the losing effort. He was followed by NBA player DeMarcus Cousins with 29 points. Cousins, the 5th overall pick in the 2010 draft, had a tough game, picking up a technical foul in the first half after tossing the ball outside the gym door in frustration after being called for traveling.

Video or GIF Evidence of His Supremacy: “Nice romantic moonlight walk on the beach, holding hands, stop on the corner to let somebody play the violin …

… nice horse and carriage ride, white horses, then I just pull a nice white rose out of my pocket, lotta kisses and hugs. Stuff like that.” DON JUAN DEMARCUS.

Final Word/2013-14 Projection: The Kings have a new owner, Boogie has a new contract, and everything’s great. Just last week he said this is the first time in his career he has run an NBA offense. Good things are happening. We thought he’d need a second life somewhere else before really taking over, and maybe that’s still true. But maybe that’s what he has in Sacramento this year. We’ll see. And we’ll be watching.