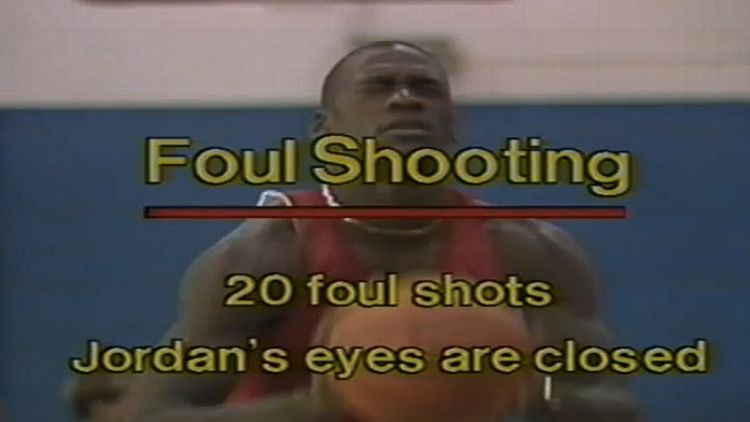 The Internet is beautiful, in the sense that certain fads, memes, and obscure pieces of media have multiple life cycles, with each rise to relevancy enjoyed by new generations of online sleuths. Rarely are things that have been dug up true Internet “firsts.”

I had to remind myself of that today, as a clip made its way to my inbox that, for a split second, I was sure had never previously been on the Internet.

But of course it had.

Five years ago, on April 13, 2008, NESW Sports posted an article titled “Michael Jordan vs Charlie and Martin Sheen, Video.” The post described a show, War of the Stars, and at the end of the description were two video clips.

A day later, this news was picked up by Will Leitch at Deadspin, who added a few more tidbits of information, most importantly a year (1988), and again, the video.

And the following day, a thread was started by “Bassy” on the message board community that will never die, slumz.boxden.com. The initial post:

“I have this really old & rare VHS of Michael Jordan taking on both the Sheens in a series of basketball events.

I uploaded an edited version yesterday to youtube and got 10,000 + hits and numerous comments in a 10 hour span so I decided to upload the entire TV show in 2 parts since people seemed to like it.”

I guess Bassy’s where it all began. Also, one additional note:

“Edit to add: This was also Jordans TV debut.”

Sifting through what’s left of the 2008 Internet, that’s pretty much all that remains on this late-’80s Jordan vs. Sheens basketball story. The videos that Bassy uploaded from his VHS tape have been taken down, and there’s a mix of vague and conflicting information about the airing history of War of the Stars as well as what the show even was in the first place.

According to the Amazon review of the VHS tape that Bassy described:

Except for Michael Jordan vs. The Sheens (and maybe Gabe Kaplan vs. Dick Weber in bowling), these all sound like horrible ideas. Also, nationally televised? This could not have gone well. More, from our Amazon oracle:

This [Michael Jordan vs. The Sheens] is the only episode we’ve ever seen released on videotape, and not many of these were made at all. In fact it is perhaps THE holy grail of videotape collecting; most rare video dealers aren’t even aware of its existence and will never even see a copy for sale let alone touch one! The tape also has vast appeal to sports & Michael Jordan Collectors. The film was copyrighted in 1987 and was possibly made after the 1986/1987 season when Jordan was still approaching superstar status; Jordan still has hair! It was released two years before “Come Fly With Me” & is Jordan’s Film Debut! After a dunking exhibition they do three events Foul Shooting, H-O-R-S-E, & 2 on 1 to 10. Jordan throws the fellahs some handicaps including shooting his free throws with his eyes shut. Sports Legends Video, 1987; 22 min

There’s also this, an image of the VHS tape’s box:

Some hilarious things to note: One, it’s a 22-minute VHS tape. Two, it may have been the only episode of this show ever made. Three, the time reference for when it was made is based on when Jordan had hair. Four, I’m being led to believe Michael Jordan played 2-on-1 with Emilio’s dad and brother. And five, “Martin” and “Charlie” are in quotation marks.

This is perfect. So perfect, in fact, that there’s just no way the footage could stay hidden forever. And, because the “Internet Cycle of Good” is a very real thing, it’s the only explanation for why, after five years, an almost-15-minute clip from the tape was uploaded to YouTube two weeks ago.

Let’s go on a journey. Together.

0:02 Jordan’s first words, after he finishes reading the newspaper:

0:22 This has the makings of something that becomes our finest 15-minute clip.

It’s surreal that this event took place more two decades before they decided to join forces again, this time in the name of underwear:

They HAD to have talked about War of the Stars on the set, right? Right?

0:42 It’s important to note, regardless if this was made in 1986, 1987, or 1988, that Van Patten just referred to Michael Jordan as “one of the greatest basketball players who’s ever lived,” which is bold. Not saying he was out of line, but it was still pretty early in Jordan’s career. He wasn’t wrong, though.

0:54 MICHAEL JORDAN JUST DROVE OFF IN THIS CAR.

Van Patten: “He drives, just like us ordinary mortals.”

1:20 Michael just did an array of dunks, in front of what looks to be an elementary school pep rally.

Very confused as to what gymnasium this is, as well as the demographics of the bleacher dwellers.

This is incredible. Don’t, for a moment, begin to think this is normal. This is insane.

1:46 Before the contest, a little analysis of the first competition, from the War of the Stars “expert handicapper”:

What say you, Stanley:

“I watched the Sheens earlier, and they can shoot. Jordan can shoot better, of course. But take the running and jumping out of his game, and he’s merely mortal. With his eyes shut, he’s second-string high school varsity.”

2:01 This is amazing. Also, the music in the background sounds like the NFL Films music on acid. Not complaining.

My guess is that Jordan wins this easily. Even if they outlaw dunking, like Larry did, there’s no way Jordan can be beat in H-O-R-S-E. We’ve all seen what he can do.

“Let’s face it. Behind-the-back, double-pumping, triple-twisting, reverse layups are not what they’re doing in Hollywood these days.”

Good to know we agree on everything, you sassy man.

I’ve seen very talented people over-spot players with lesser skills, and it usually backfires. Seems insane, but I think the Sheens can get five points before Jordan gets 10.

“The handicaps make this a tough one for Michael. Two against one. One shot at the basket. But I have to focus on one sobering, overriding consideration: Michael Jordan is about 10,000 times better than the Sheens.”

We can’t agree on everything, Stan. It just wouldn’t be right.

3:22 Before they start playing, take in everything:

I believe him. Because you know Michael and Charlie were doing a skins game on the side.

5:28 Throughout this show, I’ve been confused by this not being a hit when it came out. This section of the contest, however, is a little dry. With the exception of Jordan loudly clapping every time Charlie misses a free throw, because he’s got $50K and two Acura Integras on the line, it’s just a quiet room watching Charlie Sheen shoot free throws.

Things have been worse, but also so much better.

6:03 Before Michael shoots his next 10, Van Patten comes with the hard questions:

Van Patten: “I noticed that you’re using the name Sheen as opposed to your real name, Estevez. Estevez? Is that the way I pronounce it?”

Charlie: “The accent on the second syllable.”

Van Patten: “I’m glad you did that, because the name means a lot. He’s a great actor.”

That couldn’t have been more awkward.

6:49 These Sheen boys can shoot, with Martin starting off 2-for-2. He seems to be pretty pleased with himself.

I expect H-O-R-S-E to be nothing short of a bloodbath.

This is incredible. The Sheens are like Dell and Steph Curry.

8:35 After that shocker, Jordan seemed to remember that he was Michael Jordan, and, while not allowed to dunk, went into his arsenal of acrobatic layups.

9:00 Jordan wins H-O-R-S-E easily, and instantly there’s a newfound pep in his step. Now Charlie’s the one who looks a little worried, because of the $75K and three Ford Tauruses he has on this contest. Martin, on the other hand, just looks thrilled to be spending a day with his son and Michael Jordan, all while working up a sweat.

9:13 Michael just took off his sweatpants. Because it’s time to win and make that paper. When he did, however, some of the ladies screamed.

CLASSIC “ladies are screaming because I just took off my pants” eye roll from Michael Jordan.

It doesn’t matter who wins or loses anymore. Because that happened. This is the ultimate GIF(t).

11:15 The score is 7-2 in favor of the Sheens. Jordan’s probably not going to win, as I predicted, but again, that’s not important. Martin and Charlie playing defense on Jordan? Yes, that’s what’s important.

11:35 A sequence that just happened: Martin Sheen stole the ball from Michael Jordan, passed it to his son, who then passed it back. Martin shot a layup and then got that layup blocked by Michael Jordan. Afterward, they shook hands.

12:15 Jordan just missed an open layup. I think this never got aired because Jordan attempted to destroy all footage of him getting worked by the Sheens. Yes, that’s definitely why it happened. There’s no need to argue that.

Van Patten: “These guys are too good to give that big a handicap to, aren’t they?”

Van Patten: “OK then, we’ll have a return match sometime then.”

Fun fact: That “next time” probably happened as soon as the cameras turned off. Jordan took everyone in that gym hostage for the next seven hours and forced them to stay and watch as Jordan played Martin and Charlie, two-on-one, game to 600.

This Band Marijuana Deathsquads Played Music to a Montage of Dunks