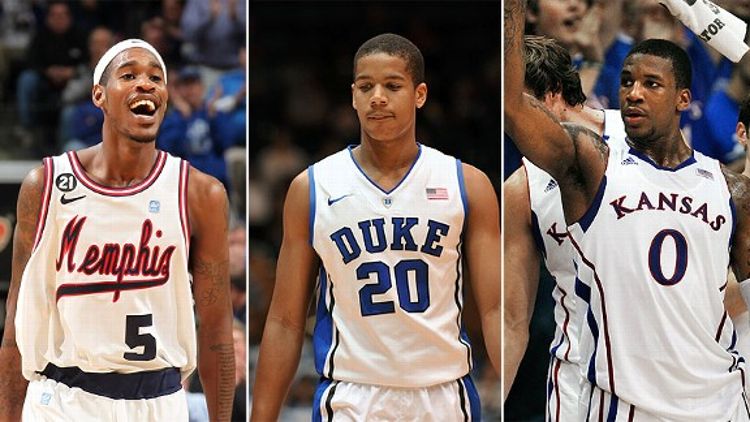 In 1982, two days before Christmas, Ralph Sampson and the no. 1 Virginia Cavaliers found themselves in Honolulu facing a tiny NAIA Catholic school called Chaminade. Sampson was in the midst of his senior campaign, only months from earning his third straight Player of the Year award, and the Cavaliers were returning from Japan, where they had beaten the Phi Slamma Jamma Houston team and Utah to move to 8-0 on the season. Meanwhile, Chaminade had lost at home to a 5-9 NAIA team called Wayland Baptist just two days before.

Alexander Wolff wrote an excellent account of the ensuing drama in 2007 for Sports Illustrated, and the 77-72 Silverswords victory remains one of the greatest upsets in the sport. Some of the quotes Wolff got from the players and coaches are priceless. For instance, here’s head coach Merv Lopes on the team that pulled off a miracle: “The guys came from all different backgrounds and weren’t too stable,” Lopes says, “But they played hard and played together.”

Chaminade’s story was full of the obligatory underdog details; Tony Randolph, who hit jumpers over Sampson all game, came from Staunton, Virginia, a town near Sampson’s native Harrisonburg, and had played in the big man’s shadow throughout high school. Lopes found one player on a Los Angeles beach, another in a Pasadena rec center, and even recruited his own cousin to round out the team. The school’s athletic department office doubled as a laundry room, and Lopes made just $10,000 a year.

After the win, even Tom Brokaw and NBC news couldn’t resist the story:

After the loss, Virginia head coach Terry Holland contacted the Chaminade athletic director and pitched the idea of an annual Hawaii tournament. In 1984, it became a reality.

Today, eight teams visit the Lahaina Civic Center in Maui every year for arguably the best in-season tournament in college basketball. It’s a three-day affair, with each squad guaranteed three games. That means there’s a seventh-place game and a fifth-place game along with the consolation and championship match-ups. The field typically consists of one team from each of the six major conferences, one team from a smaller conference, and Chaminade, which is now a Division-II program. This year’s lineup is particularly strong:

No. 6 Duke
No. 10 Memphis
No. 11 Kansas
No. 17 Michigan
Georgetown
Tennessee
UCLA
Chaminade

Combined, the field’s season record is 16-3. The action starts Monday at 3 p.m., but before we get to the preview, here’s some arcane trivia from the Maui Invitational’s 27-year history.

• Despite pulling off the upset that inspired the tournament, Chaminade’s all-time record is just 6-73. Those wins have come against Oklahoma, Princeton, Stanford, Providence, and Davidson. The worst shame a team can suffer is losing to Chaminade in the seventh-place game on Wednesday. Oklahoma was the last to suffer that fate, falling 68-64 in 2010.

• In the 1990 tournament, Loyola-Marymount hit 19 three pointers to beat Chaminade 162-129 in the seventh-place game.

• Duke has the most Maui titles, with four. In fact, Duke has never lost in Maui, going 12-0 in four tournaments.

That should be plenty for now. Over the next three days, the 50th state will play host to the best tournament basketball we’re going to see before March. Let’s take a look at Monday’s quarterfinal match-ups. All times eastern.

This is the best game of the day, and it goes off at 10 a.m. Hawaii time. Let’s hope both teams have worked out the early morning cobwebs and the lingering effects of jet-lag — not to mention whatever specific Hawaiian delights they might have indulged in last night.

Earlier this season, we watched Belmont put a scare into Duke at Cameron Indoor Stadium, finally going down by one point after a long battle. The game was no fluke; Belmont returned four starters from last year’s 30-4 campaign, and looked like Duke’s equal. So when the Bruins traveled to Memphis next, it wasn’t unreasonable to expect an upset.

Instead, Memphis played an almost unbelievably efficient game, getting 23 and 20 points from guards Will Barton and Joe Jackson, respectively, and 22 more from Wesley Witherspoon. The result was an emphatic 97-81 win. As you see from the four factors chart below, the Tigers did almost everything perfectly:

Their effective field goal percentage was an incredible 64.7% (effective field goal percentage takes the added value of three-pointers into account), the defense was excellent, holding Belmont’s three-point attack in check, and the Tiger guards rarely turned it over. The one thing Memphis couldn’t do, at all, was control the glass. Belmont grabbed 18 offensive boards to just five for Memphis, which is really a sign of style. The Tigers start two players over 6’8″, but only one, Tarik Black, plays like a true big man. Most of the time, Memphis is effectively running a four-guard offense. That makes the team fast, high-scoring, and very vulnerable to opponents that are either big or slow-paced.

Enter Michigan. The Wolverines, coached by John Beilein, love to play slow. Last season, they ranked near the bottom of Division-1 in adjusted tempo at 62.7 (adjusted tempo is a measure of how many possessions a team has per game, adjusted slightly to account for an opposing team’s pace). They play controlled, efficient Big Ten basketball. In fact, they’re even slower this season after three games, and the contrast with Memphis should be fascinating. Michigan also excels at forcing turnovers, a category in which they lead the country after the admittedly small sample size of three games.

As with Memphis, the Wolverines are led by guards. Tim Hardaway, Jr. is the leading scorer, and freshman Trey Burke has been a pleasant surprise at point guard, distributing well and scoring from outside to win the starting job. Unfortunately for Michigan, they’re not particularly adept on the boards. This game will essentially be a measure of which style wins out. Will it be control, or freedom?

A lot of people, including myself, are expecting Duke to face a small reckoning in Maui. After surviving the Belmont scare, Duke has looked a bit sloppy en route to compiling a perfect record. The Coach K milestone game against Michigan State began to crumble apart near the end, and the Blue Devils actually trailed Davidson at the half on Friday before pulling away late.

The problem is not talent or potential, but rather execution. Sebastian Pruiti outlined the struggles of freshman Austin Rivers earlier Monday on Grantland, and Miles and Mason Plumlee have been uneven at best underneath. Seth Curry and Andre Dawkins are having strong years, but at the moment Duke looks like it may be hamstrung by a lack of interior talent. Both Plumlees showed positive signs against Davidson, but thus far in their careers, they haven’t shown the ability to excel on a consistent basis.

The Volunteers are coming off easy victories against smaller schools, and have shot almost 50 percent from beyond the arc in those wins. Trae Golden, Skylar McBee, Jordan McRae, an Cameron Tatum have combined for 23 threes already, and that is a huge cause of concern for Duke. The Blue Devils haven’t thrived on perimeter defense, and Belmont was able to exploit that weakness for six threes earlier this year. Friday, Davidson hit seven.

On the other hand, Tennessee is small. They don’t start a player over 6’7″, and historically the Plumlees have thrived when they tower over their counterparts. Rebounding could be a big issue for the Vols, and they’ll have to keep Duke off the line to stay within striking distance. The Volunteer offense could quickly devolve into a three-point shooting fest, but with Trae Golden averaging 23 points and 10 assists per game, that might not be such a terrible idea.

The story of UCLA’s season can be summed up by this development: After a one-game suspension for infractions that included missing a team meeting, Reeves Nelson — the Bruins’ best player — missed the team flight to Hawaii.

It’s been a disastrous beginning for UCLA, with losses to Loyola-Marymount and Middle Tennessee. The list of things the Bruins have done poorly is long. They can’t shoot, especially from long range. The perimeter defense is shoddy; opponents are shooting 77 percent from three. They only break even on the boards, and give up far too many on the offensive end. They foul too much; opponents are getting to the line at the ninth-highest rate in the country. They rarely get to the line themselves. And, in case you didn’t notice, the “opponents” responsible for these stats aren’t exactly the cream of the crop.

In other words, it’s a good thing UCLA drew Chaminade in the first round. Without that draw, it’s hard to imagine a team they could beat. But Nelson will be returning (he caught a later plane), as will Anthony Stover, a post presence who should help on the boards. Chaminade has won three games against Division-II opponents, and will probably not fare well even against the struggling Bruins. Still, this might be the Silverswords’ best chance to make it into the winner’s side of the bracket in years.

This is a rare treat for the night owls. Kansas is coming off a bruising loss to the Kentucky juggernaut, while Georgetown has coasted against nobodies. Just for fun, let’s go back to our friends at Statsheet and look at a radar chart comparing the teams:

I won’t lie to you — it’s basically useless to compare stats this early in the season, especially when Kansas’ last opponent was one of the best teams in America. But it can be interesting, as long as we realize the limitations. Also, radar charts are nifty. As you see, the Hoyas have been very efficient on offense, shooting the 5th-highest effective field goal percentage in the country. They also force turnovers and create a lot of second chances with offensive boards. The only aspect of the Hoya game that’s truly lacked so far is getting to the line. Hollis Thompson, a 6’8″ junior, has been the star, averaging 16 points per game. Henry Sims, a 6’10” senior, is averaging 13.5 on his own, and together the two big men grab 10 boards per game.

In the Jayhawks’ 10-point loss to Kentucky at MSG, they struggled from the floor, hitting just 33.9% of all shots. They out-rebounded their opponents, but it didn’t translate into buckets. For most of the game, Tyshawn Taylor and Elijah Johnson looked stifled on the perimeter, which doesn’t bode well against Georgetown’s aggressive frontcourt. Taylor (17 ppg) and 6’11” forward Thomas Robinson (14.5 ppg) are the main scoring threats, and Robinson cleans up on the glass with 11.5 rebounds per game.

Again, it’s tough to judge anything from the limited data, but I like Georgetown’s guards, and I think they may pester and harass Taylor and Johnson into another rough performance. Maybe not Kentucky rough, but possibly enough to keep the game close and steal it at the end.

For the record, I’m picking Memphis, Duke, UCLA, and Georgetown in today’s games. And overall- call me crazy- I think the MVP will go to “the entire Iowa team.”

It’s an exciting day to be a college basketball fan, and it’s only going to get better over the next two days. The semifinals, in particular, should be fantastic. And we owe it all to a strange upset by a tiny Catholic school with a great name and a roster of unstable players. Thanks, Chaminade.

Does This Dr. J Auction Make You Sad?