In Spite of Everything, the Clippers Are the Second-Best Team in the NBA 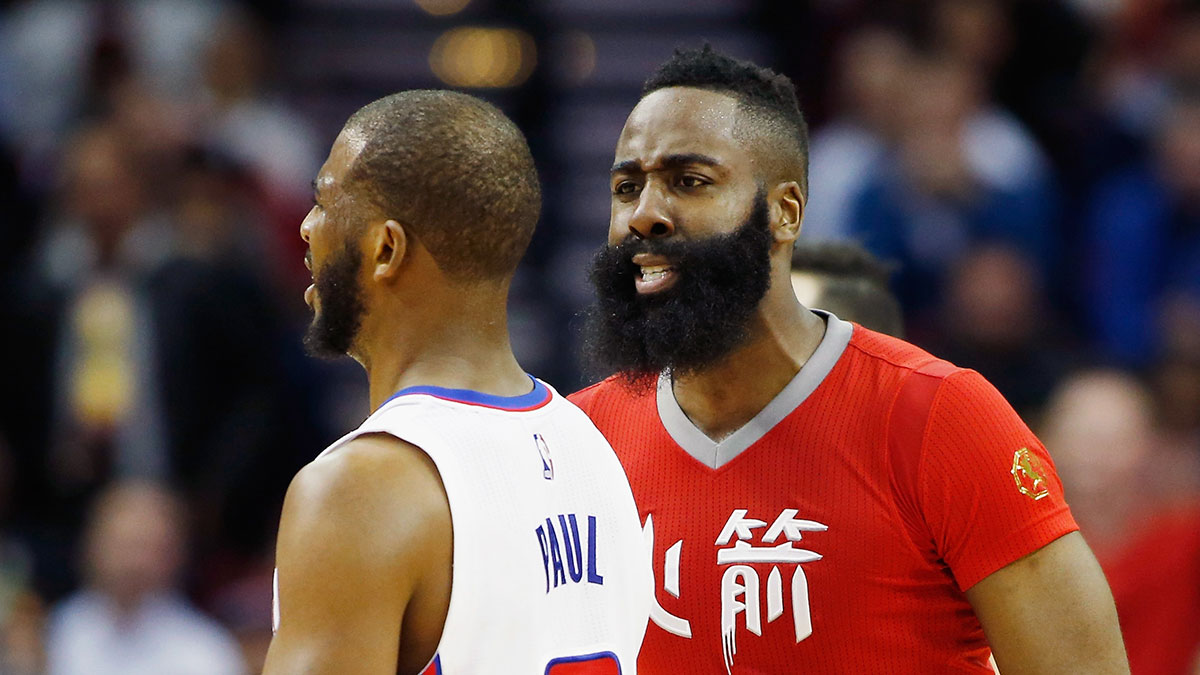 You’re groaning. I get it. In one of the greatest NBA seasons we’ve seen this millennium, to claim that the Clippers are right there in the strata directly beneath the Golden State Warriors is to admit that there is a serious problem with how this season has turned out. But April Fools’ is over. This isn’t a gotcha moment. What if the Clippers really are that good?

The Clippers embody the uniquely Western (conference) concept of middling excellence, where success and stagnation come together and create a strange kind of regular-season imperceptibility. Sure, they’re title contenders, but whatever; something will fall apart eventually. This is the torch they carry, one that had been held by the San Antonio Spurs for more than half a decade before they won a ring last year. The Rockets and Grizzlies, who can also be considered victims of middling excellence, are given the benefit of the doubt. James Harden has ascended as a top MVP candidate amid Houston’s litany of injuries; the Grizzlies have co-opted the idea to the point where their slow-cooked consistency is probably their most appealing trait as a contender — the smoke ring they’ve developed belies the disappointment beneath.

There’s a perceived hollowness to the Clippers, and it only partially has to do with their roster issues. An hourglass was set on the table the second Chris Paul was added to the team. The young upstarts became messiahs in an instant — with L.A.’s little-brother team transforming into Lob City. But despite a steady improvement of their regular-season record, they’ve yet to escape the prison of the second round of the playoffs since Paul’s arrival. There is no shelf life for anointed ones. The second you’re identified as a false messiah is the second you’re identified as an Antichrist. If nothing else, at least the Clippers have lived up to that billing.

It’s a shame. That the team still has the ability to annoy and disappoint to such an extent, however, shows our capacity to care. So maybe the best way to accept the Clippers is to embrace the flaws and appreciate their fatalistic route to success.

The Clippers are neck and neck with the Warriors as the best offense in the league, in spite of everything. The Clippers have played like a top-three defense in recent weeks, in spite of everything. Before the craziness of Wednesday’s game against the Blazers, they were one of only three teams in the top five in offensive and defensive efficiency since the All-Star break. The other two (the Warriors and the Spurs) are lauded for their depth while the Clippers are rightly ridiculed for their dearth. The team remains one of the best in the league despite having a bench that routinely starts off the second and fourth quarters with scoring droughts. They are the shallowest title contenders, by far. And outside of a loss to the best team in the league, they’re thriving.

For the past three seasons, the Clippers should have had a top-three record in the league, according to expected wins and losses.1 They haven’t exceeded their expected W-L record since the 2011-12 season. In a way, it’s the perfect distillation of how disappointing the Clippers have been. It’s also a window into how good the team might still be. They are second in the league in wins by 10 or more points with 30, trailing only the Warriors’ obscene total of 43. They are comfortably second in the league in all point differential statistics, be it net rating or average margin of victory, despite playing the second-toughest schedule. In eight of the last 10 seasons, the NBA champion was top-five in average margin of victory. In six of those 10 seasons, the champion came in either first or second.

But if the Clippers are mentioned as championship contenders, it’s only in the anything can happen sense. Vegas currently has their title odds at 16-to-1 — not terrible, but clearly outside of the elite echelon. When we talk about the best teams in the NBA, we’re talking about teams that inspire and command awe. The Clippers inspire ugh.

The LeBron-led Miami Heat gave basketball fans plenty to root against, but there was at least a begrudging respect for how good they were. When the irascible Clippers act up, it obscures — or worse, devalues — their on-court product. Hell, when their petulance hits peak velocity, you might find yourself sympathizing with the refs. Lord knows there is no truer evil.

The Clippers find ways to turn everything you thought you loved about basketball into a form of mild torture. They spoil their own fun. Chris Paul is having as good a season as he’s ever had, but oh my god, the archetypal point guard of this era won’t stop yapping. DeAndre Jordan has finally become the monolithic force the team had hoped for. But when games are dragged through hell because he still can’t make free throws, it’s easy to harbor resentment in spite of his breakthrough. Matt Barnes is a classic hard-nosed defender, but more than half the time, he’s out there experimenting with new goon acts like a stand-up at open mic. J.J. Redick might be the most neutral player in their starting lineup, and there’s been enough hate lobbed at him in his lifetime to start several wars.

The Clippers have become the architects of the game within the game. If a team doesn’t respect the way the Clippers play the game, they also aren’t respecting the game the Clippers are playing on them. The bumps, the exaggerated complaints, the Matt Barnes — it’s all as strategic and manipulative as any Harden drawn foul.

The playoffs are a different animal. We hear it every year. Four to seven games confined in close quarters with another team. Tensions have nowhere to diffuse; the boiling point lowers. There’s a method to the madness here. If you consider petty mind games a skill, then the Clippers aren’t just elite, they’re absolutely the best in the business. 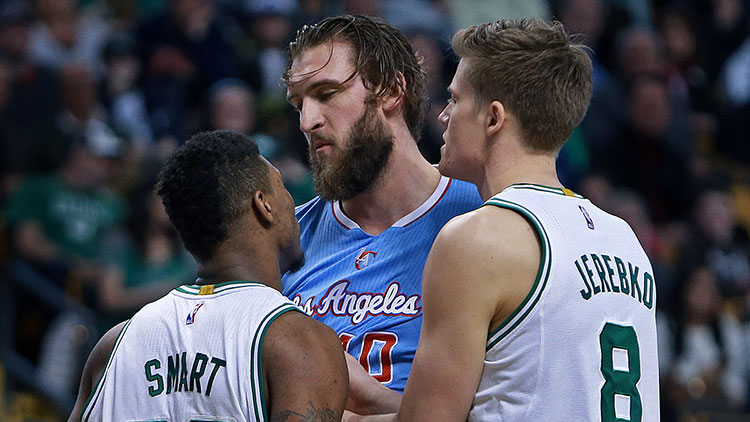 The camera captures all the grander moments of buffoonery, but seeds are planted throughout the game. This is the type of shit that happens during Clippers games: If someone important is shooting a free throw, say, Stephen Curry on a four-point-play opportunity, Barnes will stand in the paint with his hands on his hips, looking around as though he’d never been on a basketball court before, just long enough to be noticeably up to no good, but not long enough for a ref to actually do anything about it. If, say, Andre Iguodala and Leandro Barbosa are giving each other high fives, Redick, instead of walking around them, will dip between them like it was an invitation to play London Bridge.2 The devil is in the details. The Clippers are out here lobbing halfhearted psychological volleys. It’s only a matter of time before someone bites in the playoffs.

And when they do, the Clippers are praying it looks something like the Blazers’ meltdown on Wednesday night after Chris Kaman’s flagrant foul on Paul in reaction to getting nut-tapped.

The Blazers were sucked into the vortex and justifiably lost their cool. But they still lost. The Clippers scored 45 points in the 12 minutes and 25 seconds remaining after the altercation.

It made for glorious TV, and it’s safe to expect more of that in a few weeks. Maybe you prefer the drama of the Cleveland Cavaliers, but everything they’ve overcome has been internal. The Cavs’ plot points all revolve around the growing pains that arise in the #process of self-actualization, and that’s honestly kind of boring. We already went through that with Miami. The only difference is, this time, we’re OK with rooting for LeBron’s success. The Clippers are taking cues from Miami, too. They’ve absorbed the villain status of the first-year Heatles and are blowing it up on the big screen. The Cavs are finding themselves; the Clippers are founding a New World Order.

Maybe you believe the late-season surges in Cleveland and San Antonio are more impressive, and maybe you’re right. Maybe you believe in karmic retribution and that the Clippers will atone for their wickedness sooner rather than later. We’re told to focus only on the things we can control, and for NBA teams, that generally deals with effort and adherence to the game plan on both ends of the floor. There’s something ambitious about the Clippers playing the long game, using the regular season to reinforce their bad reputation — they’re trying to control the emotional current of the game. It’s a multilayered assault on the league that’s spellbinding in a way that goes beyond flawless offensive and defensive execution. Though, if you haven’t noticed, they’re capable of that, too.