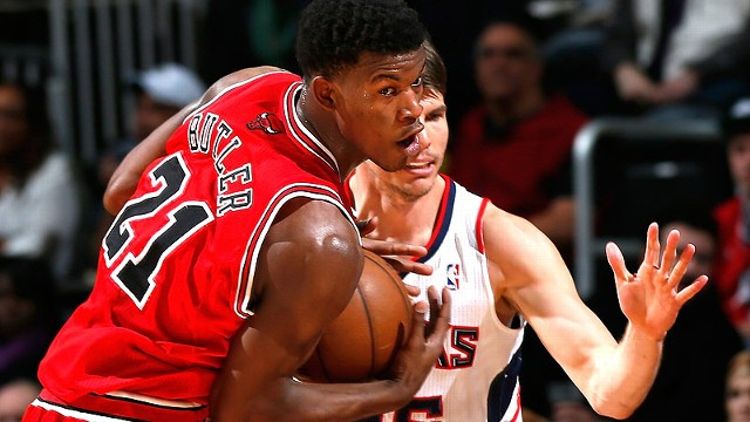 Over the last three seasons, the Bulls have cycled through a bundle of shooting guards, or reasonable facsimiles of shooting guards, in trying to find just one that combines “B”-level shooting, defense, passing, and good health. They’ve tried John Salmons, Keith Bogans, Kirk Hinrich, Ronnie Brewer, Kyle Korver, Richard Hamilton, and Marco Belinelli, and none have quite provided the ideal combination. Chicago, when whole, has a legit top-10 player in Derrick Rose, a very good all-around wing in Luol Deng, and a prized collection of skilled big men. They don’t need a star at shooting guard; they just need someone who can do everything at a decent level without compromising the team in any one area.

Then Rose went down with that horrible ACL injury last April, seemingly relegating this season to irrelevance, or, at least, NBA purgatory. Hamilton just hasn’t been able to get healthy, and still plays on a minutes limit. Belinelli tries hard, but the Bulls have overextended him on offense, and that has taken a toll on his efficiency.

Now Joakim Noah has plantar fasciitis, Carlos Boozer is dealing with a tricky hamstring, and Hinrich, back as a point guard again, is out with an elbow infection. The Bulls continue to grind out wins, because that’s what they do, but it seemed like the NBA’s version of luck was working against them finding a way to round out their rotation.

And then Jimmy Butler started playing a lot. Butler barely played last season, and though he looked good in the Las Vegas summer league, he logged fewer than 10 minutes in three of Chicago’s first seven games. It appeared Butler would be a minor rotation player, the kind that loses minutes when the playoffs come around — especially since his coach, Tom Thibodeau, is fond of overplaying trusted veterans.

That’s out the window now. Butler has logged at least 40 minutes in seven of Chicago’s last 10 games, in part because the Bulls are playing small a ton to compensate for injuries among the big-man rotation. He’s averaged about 15 points per game in that span on 49 percent shooting, adding in about four free throw attempts per game, solid defense at a bunch of different positions, and some of the best offensive rebounding you’ll see from a wing player.

Butler’s high-minutes stretch began when Deng missed five games due to his own hamstring injury. The Bulls in that span essentially just stuck Butler in Deng’s spot in their core half-court sets, with some adjustments. They didn’t ask Butler to handle the ball as much as Deng, and they built in a couple of tweaks — including a lob play — that took advantage of his bouncy athleticism. But in general, Butler just stood in for Deng.

That was fun to watch, but it was ultimately not very interesting. Deng is going to play 40 minutes (ha!) when the playoffs start, meaning that unless Chicago is willing to buck its own recent history and go small for long stretches, there wouldn’t be much space for Butler in the postseason rotation.

But when Deng came back, all those other Bulls went out, and Thibodeau had to scramble a bit. With both Belinelli and Hamilton slumping, he turned to the Butler-Deng wing combination for increased minutes. The results so far have been promising, if a bit uneven. Chicago outscores opponents by about three points per 100 possessions when Deng and Butler share the floor, almost identical to the Bulls’ overall scoring margin, per NBA.com.

More important: If and when Chicago gets healthy, playing Deng and Butler together will require different duties from Butler than he’s been performing of late. Deng will be on the floor to play the role of Deng — a role he originated — in Chicago’s core sets, meaning Butler will have to do something else. The Bulls have come up with that “something else” on a bit of an ad-hoc basis lately, since they’re playing so many unconventional (for them) small lineups due to injury

Finding that “something else” for Butler when the Bulls get healthy will get interesting. Thibodeau has tailored the shooting guard slot in Chicago’s current offense to the skills of Hamilton. There’s a lot of running around screens, with the Bulls often set up in formations that give Hamilton a choice between a Noah screen on the left side and a Boozer-Deng double-stack on the right. Hamilton gets catch-and-shoot chances out of this action, and when defenses overplay his shot, he can fire a quick-hitting pass to the wide-open big man who just screened for him.

This is not Butler’s skill set. Only 17 of his 247 field goal attempts going into Monday’s game had come via off-ball screens, per Synergy Sports, and he had shot just 5-of-17 on those plays. He also has very limited experience as a pick-and-roll ball handler, a secondary role for both Hamilton and (especially) Belinelli on this Chicago team.

Thibodeau is a very good coach, and if he chooses to, he and his staff will find creative ways to use Butler at 2-guard in a Rose-centric offense. But there’s only so much time to game-plan in an NBA season, and the easiest way to use Butler — or any wing player, really — in a Rose-centric offense is to station him behind the 3-point arc as a shooting threat around a pick-and-roll. This is, after all, how Bogans started 82 games for the 2010-11 Bulls.

The Bulls have done a bit of this lately when Butler and Deng share the floor, and they’re especially fond of sticking Butler in the weakside corner on pick-and-rolls. That puts Butler in a position in which his man has to help in the middle of the floor on the pick-and-roll, meaning he’ll often be open for catch-and-shoot chances.

Butler has preferred to creep in along the baseline when his man slides toward the paint on a help assignment. He’s a very intuitive cutter, and this very cut — the baseline creep underneath an ongoing pick-and-roll — is a staple among wing players with unreliable 3-point shots and/or a prodigious ability to catch and finish strong in traffic. Andre Iguodala, for one, has had some impressive highlight dunks from this kind of cut.

Butler has evolved into a solid finisher. He’s shooting 67 percent in the restricted area even though only about half of his baskets there have come via an assist, and he’s shown a very nice ability to leap into an airborne defender’s chest, maintain control of body and ball in midair, and finish as that defender begins his descent to the court.

It helps that Butler plays a lot of minutes with two heady big-man passers in Noah and Boozer. A lot of Chicago’s core sets, whether they’re pick-and-rolls or those Hamilton-style plays described above, involve Noah and Boozer handling the ball below the foul line, and few front-line tandems are better at squeezing the ball through tight spaces to cutters down there.

But those spaces are tight, and they’ll get tighter once Chicago reintroduces a point guard who can really attack the lane. Remember: Rose is a below-average 3-point shooter, and Deng is right about league-average, so it’s not as if Chicago’s other perimeter guys inspire the sort of terror that makes defenders stick to them and creates openings in the middle of the floor. Can Chicago’s offense survive with a Rose-Butler-Deng perimeter trio?

“Jimmy’s shooting has improved,” Thibodeau says. “And he’s going to continue to work at it. Jimmy has earned everything he’s gotten. I think he’ll continue to get better.” Thibodeau also says Deng can mimic Hamilton’s role in catch-and-shoot sets, allowing Butler to do other things within the offense. Thibodeau knows how devastating a lineup like Rose-Butler-Deng-Gibson-Noah could be defensively, provided the team can squeeze enough spacing and points from it. “When we play Lu and Jimmy together, we just always feel like the game goes in the right direction for us defensively,” Thibodeau says. “Teams just have a harder time finding their primary scoring options. I knew they could play well together.” Butler runs the floor aggressively, a skill that could mesh well with Rose’s high-speed transition bursts, Thibodeau adds.

Chicago has started non-threatening 2-guards before, but Bogans could at least hit a high percentage of corner 3s, and they had Korver coming off the bench to provide a dose of spacing — and play heavy minutes alongside Chicago’s starters.

We already know Butler can defend. He’s big enough to guard either wing position, and he can take power forwards in a pinch if Chicago chooses to go small — a weapon that will come in handy if they ever draw Miami again in the playoffs. Butler has good balance and footwork, and has done well this season against the pick-and-roll and in chasing guys around screens.

He’s a little more prone than most Chicago defenders to straying a half-step too far from a corner shooter or risking a lunge into a passing lane, but Butler has eliminated a lot of that from his game already, and generally follows the Bulls’ core scheme.

The questions will come at the other end. But these are the kinds of semi-unexpected questions coaches hope to face during the regular season, provided those questions emerge with enough lead time to find an answer before the playoffs. It’s also a question that has implications for Chicago’s cap picture. The Bulls have never paid the luxury tax under Jerry Reinsdorf’s careful (i.e., cheap) stewardship, but they’re on pace to pay it both this season and next. Gar Forman, the team’s GM, tells Grantland that Reinsdorf is fine paying the tax in those two seasons, as long as the Bulls don’t get into the dreaded “repeater” status, which carries harsher tax penalties. But approaching the tax or exceeding it also makes it harder to fill the roster around Chicago’s core, since tax teams don’t have access to the full midlevel exception and other roster-building tricks. “With the new collective bargaining agreement and all the new rules,” Forman says, “it becomes very difficult to improve your team.”

But Chicago can get under this year’s tax by dealing Hamilton in a salary dump, and the same move would also cut next season’s tax exposure. Butler’s continued improvement could help the Bulls on the court and in terms of the team’s cap sheet.

Bottom line: We knew Rose’s return would make Chicago an intriguing must-watch down the stretch. Now we have a feel-good subplot.