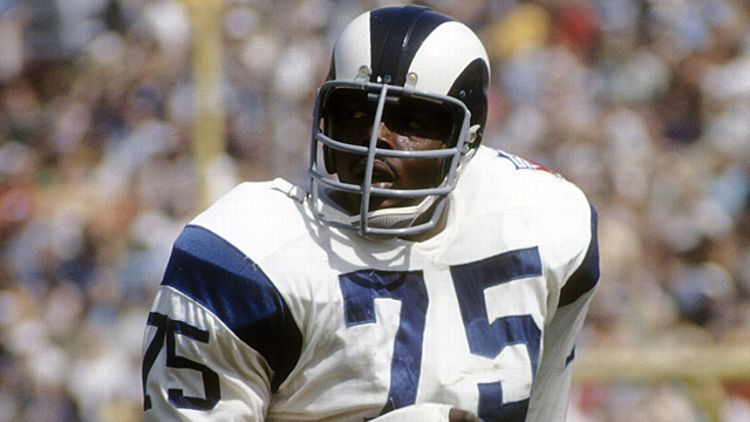 It is rare that an athlete is so good at his job that he inspires an entirely new quantitative measure, but this was the case with David “Deacon” Jones, who died of natural causes yesterday at the age of 74. Jones was a 6-foot-5, 270-pound behemoth, a flamboyant man who spoke plainly about his own ferocity (occasionally to odd effect). He was not shy about his abilities, or about his place in history; he once said that the only regret he had about his career was that he wished he’d taken the time to “kill more quarterbacks.” He perfected a barbaric (and long-outlawed) technique known as the head slap, a nyuk-nyuk Moe Howard move that was exactly what it sounds like, and had the effect you might imagine it would have when you are a very large man ricocheting your palm onto an offensive lineman’s helmet.

It was Deacon Jones who was credited with coining the term “sack” (though there’s some uncertainty about whether he actually did); it was Deacon Jones who revolutionized the way defensive linemen are evaluated, spawning probably a billion dollars in signing bonuses for his descendants, all based on a statistic that he himself came up with. And the irony is that, according to the official National Football League records, Deacon Jones never recorded a single sack. Nobody did, until more than 20 years after his NFL debut, when the league finally caught up with Deacon’s invention.

A few years ago, I spoke to a New Mexico gift-shop owner named John Turney, who’s done comprehensive research into the history of the sack and has attempted to determine the true single-season sacks record holder. Turney has gone back and combed through videotapes and statistical records, including those of Deacon Jones; at this point, he probably knows the numbers better than anyone else does. He credits Jones with 173.5 career sacks. And yet there is still nothing official: The Elias Sports Bureau, which compiles the statistics for all the major sports leagues in America, insists it would be impossible to go back and evaluate the sack numbers before 1982, when they were first officially compiled (largely because so many incentive clauses and bonuses were tied into sack numbers). If they did, Turney told me, Deacon Jones would have recorded two seasons with 22 sacks over the course of a 14-game season; Michael Strahan, in his Favre-aided 2001 season, had 21½ over a 16-game schedule.

“Since when does ‘all-time’ begin in 1982?” Jones once asked. It remains a fair and cogent complaint, one that will probably never be remedied.

Jones was raised in Florida — he recalled coming out of Sunday church services at an all-black congregation when several white teens hurled a watermelon out of a car, killing an elderly woman — and went to college in South Carolina and Mississippi, but he always seemed destined for Hollywood. (This was, after all, a man who devised his own nickname, borrowed from Deacon Dan Towler, who played for the Rams in the ’50s and became a minister.) He’s best known as a member of the Los Angeles Rams’ Fearsome Foursome, who will almost certainly go down as the most charismatic (as well as the best) group of defensive linemen to ever play the game. All four wound up with acting careers of one kind or another; Lamar Lundy played a boulder-throwing cyclops in a Lost in Space episode, Jones made appearances on The Odd Couple, The Brady Bunch, and in Heaven Can Wait, Merlin Olsen sold FTD bouquets and sheltered orphans on the prairie, and Rosey Grier, when not espousing the virtues of a good cry, was sprouting a spare head.

Grier, the soft-spoken, Gump-ian figure who sang with Curtis Mayfield and wrestled the gun away from Robert F. Kennedy’s assassin, is now the last surviving member of the Fearsome Foursome. A few years ago, I interviewed Grier out in Los Angeles, where he still lives. In speaking of his affection for his fellow man, he told me, “You have to make up a reason why you get to hate somebody.”

I don’t know if Deacon Jones ever actually hated any of the offensive linemen he slapped into submission. I imagine he enjoyed playing a stylized version of himself in the media, as a generation of athletes have done in his wake. But no one in the history of professional football will ever be better at what defensive football is, at its heart, because no one will ever knock people on their asses quite like Deacon Jones did.