In Case You Were Wondering, Spain Is Definitely Not Over 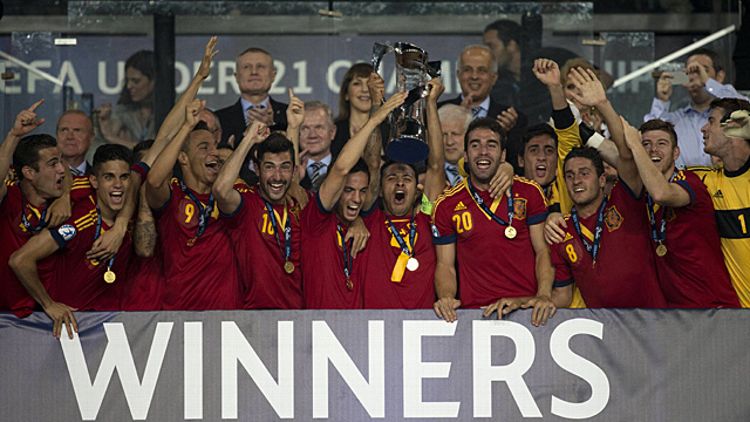 Can you win a national anthem?

Brazil might have done that before the Confederations Cup final. Although, from the crowd noise, it’d be difficult to pinpoint where the anthem stopped and the game began. It was only 90 seconds until Fred scored and laid waste to any hope Spain had of weathering the early onslaught of the atmosphere and settling into its game.

It never did. Instead Spain got pasted 3-0 and suffered its first loss in 30 matches. Spain apologists will point out that they had one less day of rest after playing an additional 30 minutes in more taxing weather conditions (86 degrees/55 percent humidity for the semi in Fortaleza) than did Brazil (79 degrees/44 percent humidity for the semifinal in Belo Horizonte). And even then, before Gerard Pique got sent off, Spain was about six or seven inches — in the form of improbable goal line clearance by David Luiz and missed PK by Sergio Ramos — from being down only 3-2 with more than half an hour to play.

But Spain doesn’t need apologizing for. And anyone dancing on the grave the visitors dug themselves at the Maracanã would be smart to take a look at what La Roja Jr. has done (and is still in the process of doing) this summer.

Spain’s U-21s skated through the European Championships in Israel last month. If you’re still sold on May’s line of reasoning that goes, “Well, Bayern beat Barça handily, so Germany is also better than Spain,” you should go watch the latter dismantling the former from the kids’ Euro (full match archived here). The longer the match wore on, the more of an accomplishment it was for Germany just to get the ball into the Spanish half of the field with possession.

Sure, these are the U-21s, but many of them were playing in Israel because Spain is so loaded they can’t get a cap with the senior national team. Against Brazil on Sunday, Spain featured a midfield of Fabregas, Navas, Cazorla, and David Silva on the bench. So people like Isco (another one of those guys whose feet are like Velcro) and Thiago Alcantara are stuck playing the U-21s simply to get competitive games. Alcantara had a hat trick in the final against Italy by halftime.

The central defensive pairing of Marc Bartra and Ingo Martinez coasted through the tournament without conceding a single goal. The few times they made mistakes or gave up dead ball situations, they were bailed out by David De Gea. Yes, Manchester United’s number one is Spain’s number — what, number four? All 11 Spanish starters made the UEFA all-star squad from the tournament.

Spain’s U-20s had been cruising through the U-20 World Cup in Turkey until this weekend. After topping their group and beating Mexico to advance to the quarters, they were eliminated by Uruguay.

That loss isn’t so much a stain on their collective national teams as it is a reminder that upsets happen. The game’s only goal came in the 103rd minute, so it’s not like Uruguay played them off the pitch. They defended well, took the match to extra time, and scored on a free header from a corner. On the balance of play, Spain had the better chances.

Having good U-whatevers is no guarantee of future success. Scotland had a couple of decent youth sides not too long ago, but that only translated into the Scots continuing to not qualify for things at the big-boy events. But some of Spain’s “youth” players look better than some of the veterans (or at least better than Alvaro Arbeloa) right now. And that current group of veterans isn’t a generational aberration. It’s not that La Roja have hit a particularly purple patch so much as Spain, as a country, has — albeit unintentionally — finally started to exploit the native talent it always had.

In the mid-to-late ’80s, Spain (the political/geographical entity) began building athletic facilities — a large majority of them public — all across the country, and they actually take a census of these things. In 1986, the number of local sports facilities nationwide was 48,723. By 1997 — and with the 1992 Barcelona Olympic games as a major catalyst — the number had jumped to 66,670. That’s just less than a 37 percent increase in just more than a decade. By 2005, the number was 79,059.

What happened was politicians started using these things as visible and popular tools to compete both with each other for civic superiority (“My new track is better than your new track”) and for votes (“I built you this wonderful natatorium, so vote for me in the upcoming election”). And it’s still happening, according to Jorge Garcia at Universidad de Castilla-La Mancha, “Nowadays the Local Administrations spend most of the public spending on sport and take part in most of the investments in sporting facilities.”

This has resulted in situations like this, this, and this. Those are three different facilities each with indoor courts, outdoor courts, indoor pools, outdoor pools, synthetic pitches, and natural pitches, and they are all within about a five-kilometer radius of each other in Region de Murcia.

Towns and villages, even with populations of 10,000 and under, suddenly had a wealth of modern and accessible football pitches. But, as intimated above, Spain didn’t just build soccer fields. They built facilities for everything. Veloways, bocce pits, lawn bowling greens, indoor heated pools. The greatest increases since the late ’80s were in the number of swimming pools, football fields, and tennis and basketball courts (in that order).

To see the long-term dividends paid by that, just look at the results from last summer’s Olympics in London. If you had watched the prime-time broadcasts, you’d think by their absence in the glamour events that the Spanish were terrible swimmers. And, no, they aren’t very competitive at going back and forth over a certain distance, using a certain stroke. But that’s only part of the Olympic swimming program. In synchronized swimming Spain won the bronze in the team event and silver in the duet. The women’s water polo team won a silver medal, after having never previously qualified for an Olympics (the men finished sixth).

And while they didn’t win anything in tennis, Spain did put three players into the third round of the men’s tournament. That’s with Rafa Nadal having withdrawn. No other country had more than two (France, Serbia). Not bad for a tournament held at Wimbledon, effectively the weakest surface for Spain’s clay-court players. And even if Olympic tennis isn’t a measure of anything beyond what happened in a two-week stretch of time, two of the top five men’s players in the world right now are Spanish (Nadal, Ferrer).

It’s not some sociological secret that money, facilities, and access means winning things. Or, more accurately, it means a deeper talent pool that helps you win things. Talent identification, coaching, nutrition, and work can’t be discarded just by building swimming pools and soccer fields in small towns. But the former gets easier when you do the latter. When a lot of your people are out playing games, a lot more of them are going to be good at those games.

Spain’s decision might not have been conscious — the way Britain, for example, decided they were going to be good at cycling — in fact, it wasn’t really a decision, but rather an unintended consequence. But it’s a consequence that means it might be time to start thinking of Spain less as a country that’s on a finite unprecedented run — two Euros and one World Cup — and more as one that’s joining the Italys, Germanys, and Brazils as a side that’s pretty much always going to be good. That is, if you’re not already thinking that.

Vicente Del Bosque still has some major issues to work out before next summer — has Arbeloa played himself onto the bench (or even off the plane)? Should a 34-year-old Xavi give way to Fabregas in midfield? Can a player as ineffective as Torres win another Golden Boot? What to do now that teams have figured out how to deny you space in the final third? But Spain being “over” probably isn’t one of those things. Or at least not until 20 years from now, when the impact of the country’s near bankruptcy in the wake of the global financial crisis becomes manifest in sports.

In the meantime, Spain will probably continue to lose national anthems. But that’s almost entirely due to the fact that Spain’s anthem has no words.