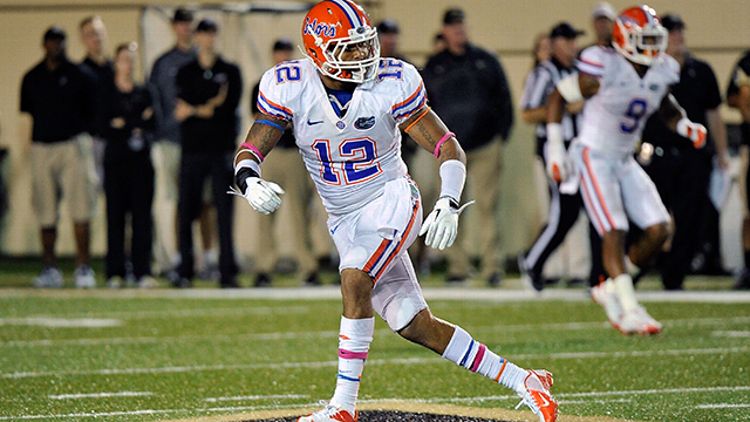 In case you’ve been living under a rock — or just in some normal place where you don’t follow stupid sports stories — settle in for some enlightenment. Florida Gators linebacker Antonio Morrison, a sophomore, was arrested at 3:43 a.m. Sunday for walking by a police car, barking at a police dog that was in the backseat, and then “resisting arrest.” The cop was in the process of investigating a disturbance, so Morrison was charged with “interfering with a police animal.” Since it was his second arrest this summer — the first happened in June after a fight with a bouncer — he was suspended from the team, and Will Muschamp announced that he’d miss “at least two games.” Yesterday, all charges were dropped when state attorney William Cervone watched the arrest video and determined that the whole thing was bogus and there was no “malicious intent” when Morrison barked at the dog.

But here at Grantland, we’re not so keen on sweeping important stories under the rug. What really happened that night? Let’s leave no stone unturned. We have some questions that need to be answered, starting with:

1. Why is it called “resisting arrest” in Florida when you don’t resist arrest … at all?

Here’s the video of the cop detaining Morrison:

It is resisting arrest simply because you don’t give the cops the impression that you’re happy to be arrested? If that’s the case, I’m all for it. Cops work hard, and I think they deserve a little gratitude. Even if you’re the one being arrested. I just think that needs to be made clear in the actual rules. I would call it the “Happy-Time Smiles Law.” If you don’t have a sunny disposition around a cop, that’s resisting arrest. Even if you’re not being arrested. People have too much freedom. I should probably be arrested for even writing this.

According to Morrison in the official report, he told police that the dog made a “woof-woof” sound at him, and he was simply responding. To verify, I Googled “what sound does a doggy make,” but that returned confusing results about the sound Alex Trebek’s mother makes — “moo,” apparently. But I’ve read a lot of children’s books in my time, and according to those sources, “woof-woof” is exactly the kind of noise a dog makes. Morrison’s story checks out. (Although the dog in question is kind of cliché, like a bird who literally says “cheep cheep!” If I were a music critic, I’d call him derivative.)

3. Was Morrison’s bark conversational or antagonistic?

The word “bark” has a negative connotation, and we associate it with aggression and anger. But it’s worth remembering that “bark” encompasses 100 percent of dog language. Dogs bark when they’re mad, when they have to go to the bathroom, and when they want to compliment another dog on her grooming without seeming creepy. It covers the whole emotional spectrum. There was no way for Morrison to know the dog’s intent when it barked at him, but, more importantly, there was no way for the cops to know Morrison’s intent when he barked back. Maybe he was saying, “Hey, why don’t you focus less on passersby and more on your job, pal?” Or maybe he was asking whether the dog was an actual police dog, or just a normal dog who was sitting in the backseat of a police car because he’d been arrested. Without audio of Morrison’s bark, we simply can’t know.

5. Was it confusing to Morrison that the dog had the name of a different animal?

Did Morrison maybe hear an officer call out to “Bear” and assume the backseat was filled by a giant black bear, and he was the cop’s partner in a weird new police experiment that would one day be turned into a hit summer blockbuster (The Right to Bear Arms)? If that’s the case, it’s totally possible that Morrison was barking in self-defense.

6. Was it confusing for the dog itself to have the name of a different animal?

Look, being called “Bear” is better than being called “Pansy the Parakeet,” but it opens up a whole set of difficult expectations. You have to constantly live up to that name, and all the toughness and masculinity it implies. What if Bear the dog were sensitive, or liked art? What if he sometimes cried by himself? What if he secretly wanted to be a female dog? But none of that was “allowed,” because he was Bear, the fearless crime dog. Maybe the pressure of living a double life might have led him to bark at passersby as a way of letting off steam. Maybe that’s the dog version of being an alcoholic. Maybe he went home at night with froth all over his gums and his wife was like, “Have you been barking?” And Bear was like, “No,” but then he lets out an accidental yip, his wife just stares at him in disappointment, and he has to spend the night at a crap motel.

7. Was Bear the dog ever questioned?

There’s an enormous anti-human bias in the justice system. Just look at the numbers — 100 percent of those arrested, prosecuted, and imprisoned are humans. Animals always seem to get the benefit of the doubt (except when they’re executed for biting people), and this case was no different. Bear was never detained, questioned, or otherwise implicated in any way. How can there be any accountability among dogs when they know they can get away with literally anything? (Except biting people … at which point, again, they get executed by the state.)

8. Are police horses secretly kind of glad that a dog got harassed?

“We don’t see that very often at all,” he said. “Gainesville Police Department has horses and they see it sometimes. Usually everybody steers clear of the dogs.”

I imagine this conversation took place between Bear the police dog and a police horse named “T-Rex.”

T-Rex: Well if it isn’t Bear, the dog that got barked at!

Bear: Look, T-Rex, I could really do without the sarcasm. It’s been a long day.

T-Rex: Oh gosh, I’m sorry, was this whole thing tough on you?

T-Rex: Well I’ve got an idea … maybe you should try getting punched by every drunk asshole in town on a nightly basis, Bear, you whining little dick.

9. Back to Morrison: Why didn’t he use his trademark line?

The night of his earlier arrest on assault charges, Morrison reportedly got angry at a high cover charge and delivered the following line to the bouncer:

“Do you know who I am? I am a UF football player. I am Antonio!”

The first two sentences are just classic D-I athlete entitlement, but that last line — “I am Antonio!” — has a sort of Shakespearean dignity. I imagine he pulled himself up to full height and delivered the words with gusto, gesturing outward with one arm while the other was held gallantly at his hip. Maybe he was wearing a cape and a forest green frock with yellow trimming. I don’t know. The report doesn’t go into that kind of detail. But what I do know is that instead of returning Bear’s bark with one of his own, he should have gone back to the well: “How dare you? I am Antonio!”

Morrison’s internal monologue: “Don’t fall for it, Antonio. Don’t do it. They’re just trying to get you ejected. Oh God, he’s barking so loud. Soooo loud. It would be so easy to just … but focus up! I AM ANTONIO! I am better than this. I am a football player. I am … oh to hell with it, let’s get wild! YOLO!”

[Morrison drops to all fours, starts barking back at Uga, is immediately set upon by four cops.]