Image Is Nothing: Grant Hill and His Amazing ’90s Sprite Ads 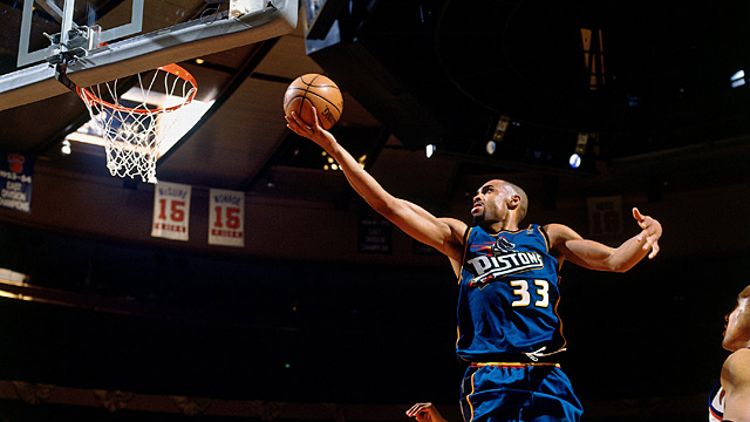 The occasion of Grant Hill’s retirement from the NBA is a time for reflection. It’s time to consider his accomplishments, both in college at Duke (where he passed Christian Laettner that ball that led to that shot that went in) and at the professional level as a member of the Pistons, Magic, Suns, and Clippers, not to mention on the world stage as a gold-medal winning athlete in the 1996 Summer Olympics in Atlanta. A time to consider what might have been had ankle injuries not hobbled him in what should have been his prime. And a time to appreciate his evolution into a canny defensive stopper and pick-your-spots veteran when his career blossomed for a second time in Phoenix.

But let’s also remember that years before Kevin Durant helped that frisky Asian woman, Grant Hill rescued an entire cat out of a gutter and had a spectacular mustache while doing it.

That’s right: During the lockout, prior to the shortened 1998-99 season, NBA stars like Tim Duncan and Hill spent their time working for 1-800-TALL-MEN. But Hill was hardly a stranger to Sprite’s slightly off-key, antiestablishment promotional tactics. For years, Hill had been cast in a series of ads under the banner of “Grant Hill Drinks Sprite” that embraced grungy visuals and what the suits at Sprite no doubt thought of as a “slacker” aesthetic. The tag for every spot was “Image is nothing. Thirst is everything. Obey your thirst.” Hell, Mark Pellington — the guy who directed the “Jeremy” video for Pearl Jam — directed the most well-known Grant Hill Sprite ad, from 1995:

Please note the chain-link fence, the chain basketball hoop, the chain garbage can. With every fiber of its gritty being, this ad is selling you the un-Jordan.

In some ways it was fitting for Hill to be cast in opposition to Jordan. He was one of the first players to get saddled with the “next Jordan” tag, in spite of his demonstrably different game. Although he had hops, at his peak (not exactly his prime, which he didn’t fully get to enjoy), he was a genuine point forward from the wing, becoming the first player since Bird to average 20 points, nine rebounds, and seven assists per game. No one’s done it since. He’s also one of only six players to average 20 points, five rebounds, and five assists in his first six seasons in the league. The others are a murderer’s row of multifaceted talent: LeBron James, Jordan, Bird, Jerry West, and Oscar Robertson.

But enough about actual accomplishments, and back to the ads.

I loved Grant Hill in that made-for-TV drama. I really believed he was Jay. Or maybe Jake. The deceptively straightforward title of his memoir, Polite Like Me, masks a deep vein of concern over the NBA’s image in the mid-’90s, and the complicated relationship that players have always had with the public regarding how nice or not nice they are (cf. LeBron James, Kevin Durant). But the real gold is that music video clip in the middle, right? Based on this still:

I’m pretty sure the group name is “Grant & the Hilltones” (you need to squint and back away from your screen a little), which is sad only because it should have been “Grant & the Hillionaires.” The name of the album is Rodeo Pop, which — if this were Lost or Arrested Development — would have been a call forward to Hill eventually playing for the Spurs. But the absolute most important thing to keep in mind here is that the full hook of “I’m a Cowboy” is “I’m a cowboy / close to the volcano.” I’m speechless.

And in case it flew by too quickly for you, THERE’S EVEN A DIG AT SHAQ AT THE END.

It’s maybe the most straightforward Grant Hill Sprite ad that says the most, though:

Almost 15 years ago, this ad mocked the notion of making shoes with special Brazilian rubber and wearing shorts so light he could levitate. And where are we today? Just this year, the Warriors unveiled new uniforms 26 percent lighter than their current ones, and the Kobe VIIIs are so light they feel like sweatpants.

After drinking Sprite you still might not be thirsty anymore, but hydration has taken a quantum leap in the past few years. Gatorade doesn’t just slake your thirst (slash cure your hangover) with its blend of electrolytes: Now it helps you prime, perform, and recover with a multitiered system of beverage options. Unfortunately, side effects include difficulty sleeping, night sweats, feeling like you might pass out of double-teams, and conference semifinals eliminationitis.

Grant Hill’s collection of Sprite ads exist at a strange nexus where our eternal desire for panaceas intersects with our equally timeless suspicion of snake oil, mediated by a marketing machine dealing with the oddly slackery atmosphere of the mid-to-late ’90s and Hill’s blend of stupendous talent and placid, even ho-hum demeanor. Dealt this hand, Sprite took a surprisingly successful eat-your-cake-and-have-it-too approach, thumbing its nose at the notion of performance enhancement while misdirecting away from the fact that a beverage laden with high-fructose corn syrup is maybe not the best thing for quenching your thirst. The most honest ad of the collection is probably this one, which is nothing but a monologue from Hill in the locker room with cash piling up in the corner every time he says, “Sprite.”

Given its inclusivity of college and international achievement, the Naismith Memorial Basketball Hall of Fame will likely enshrine Hill, even given the ankle-injury-induced trough in the middle of his career. Lee Garfinkel, the man who created the “Obey Your Thirst” campaign for Sprite, is not yet in the Advertising Hall of Fame, but he’s received “every major advertising award” (including an Andy, just like Megan Draper). If there’s any justice, their inevitable plaques in these halls of greatness will have this playing on an endless loop below them: