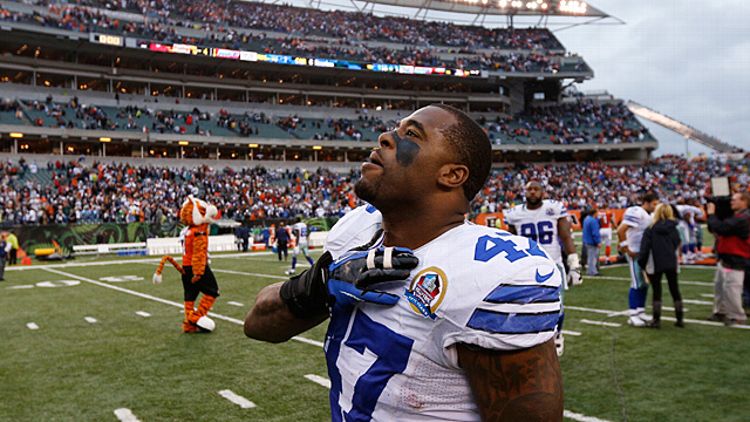 On Sunday my sister drives me to the bar so I can watch the Bengals play the Dallas Cowboys. “Well, I hope they win,” she says. “But I also hope they lose, so you’ll have something new to write about.”

I don’t say anything. She’s just trying to be positive, and she’s also the reason I’m not riding a bicycle. But in my head I curse her for hexing Cincinnati, who have won four games straight, who could pass the Steelers in the race for an AFC wild-card slot if they win this week, who are In the Hunt. I am now a person who thinks things like this. I am now a person who throws around the phrase “in the hunt,” which is a stupid phrase and also maybe not grammatically correct. Why isn’t it “on the hunt”? When in doubt on vexing usage questions, I’m with Ronnie Van Zant.

I have maybe lost perspective, a little bit. These are still the Cincinnati Bengals we’re talking about. I have been warned and warned about investing my emotional capital here.

I’d actually been in Dallas earlier that week, for work. Like most places I’ve been to for work, I have very few impressions of it.

It felt weird. I knew the Bengals were playing the Cowboys next and I was worried that someone would ask me about football, and my allegiances, and I’d have to admit to being America’s Only New Cincinnati Bengals Fan, and that there’d be uncomfortable silences, or perhaps outraged questioning of my loyalty to America’s Team and therefore by extension America. The only part of Texas I’ve spent any time in is Austin, which is basically Portland with brisket; I don’t know which of the stereotypes are true.

But my own rooting interest didn’t come up, and when people talked about the Cowboys — and I should probably say here that this was before Josh Brent’s accident and Jerry Brown’s death, which I assume would have changed these conversations — nobody had anything particularly nice to say. “The problem with the Dallas Cowboys,” a man drinking orange juice at a bar said to me, “is Jerry Jones.” Then somebody asked him a question and I never heard the rest of what he had to say, which oddly made his statement seem more and not less definitive, as if he’d said, “The thing that covers 70 percent of the Earth is water.” Sure.

I had a few hours of downtime in Big D before my flight back to L.A., so I walked to Dealey Plaza, like the wearing-the-Starfleet-uniform-to-jury-duty-level JFK-assassination nerd that I kind of am. When I was 18, I read Don DeLillo’s Libra (in which Kennedy is killed by a bunch of people who all talk like Don DeLillo) and James Ellroy’s American Tabloid back-to-back, a literary double bill guaranteed to convince you that all novelists who aren’t writing about Kennedy-assassination conspiracies are to some extent just dicking around. I called Dallas “Big D” just now because that’s what Ellroy calls it in The Cold Six Thousand. I have no idea if anybody else ever calls it “Big D” or if it’s purely an Ellroy-ism, like “pouring the pork.”

So I wanted to see where it happened. I walked around the plaza for a while as the sun went down. There were a few other people there, all men, men like me, feeling around for psychic resonance, asking the same questions in their minds, namely, Wait, is this the Grassy Knoll? Or is it that other grassy area, over there? Is this even a “knoll,” precisely? We all looked up from our respective vantage points, at the sixth floor of the Dallas County Administration Building, formerly the Texas School Book Depository, as if we might notice something no one else had, as if Donald Sutherland might show up in a raincoat, lead us to a park bench, and talk to us about the world inside the world. That didn’t happen, though.

I took Instagram pictures of the sunset over what I thought was the right knoll and went inside the Sixth Floor Museum. There’s a strict no-photography policy on the sixth floor and a pane of glass that keeps you from going anywhere near the window Oswald shot from, because the Sixth Floor Museum knows how you people are.

I would describe the various coffee mugs available for sale in the Sixth Floor Museum gift shop as insufficiently ironic.

One last Dallas note: On my way back to the hotel, a woman in a blue-and-yellow nylon tracksuit approached me on the sidewalk. “Can I ask you a question?” she said.

She was pale and sweaty. We were a few blocks from a Greyhound station. I felt a story coming on, in which a request for financial assistance would be a recurring motif. I lived in New York for 10 years; I pulled the move I pull instinctively, which is to mutter an insincere “I’m sorry, I can’t,” as if I’ve been addressed in a language I don’t speak, while continuing on my way without slowing down. I was maybe not the first person who’d blown her off. I was maybe not the 20th person. As I rounded the corner she yelled out:

“Y’all Dallas people are so rude. No wonder this is where Kennedy got kilt!”

Did she know something? I walk the rest of the way feeling vaguely implicated. Most of all, it was you and me.

Ye Rustic has the Bengals game on in the wood-paneled back room. I have a TV to myself, a spacious booth with a view of a couple of gently revolving fiber-optic Christmas trees, a conveniently placed string of festive garland with a socket I can plug my dead phone into, a breakfast burrito that was neither bad nor good. I can glance to the left and watch the Chargers welcome Ben Roethlisberger back after a three-game potentially life-threatening-rib-injury-necessitated holiday by pummeling his Steelers, an upset I understand would reshape the map in the Bengals’ favor provided they beat the Cowboys. I understand the map and how it is reshaped. I know more about the map than I do about who’s winning The Voice. The looking-glass: We are through it, people.

I am too comfortable. You know where this is going, even if you don’t know how this game went. After four straight wins, the Bengals are going to give me something new to write about.

They’ve carved out a 13-10 lead by halftime. The halftime show at Paul Brown Stadium seems to involve a magician in an electric-cyan tuxedo and his assistant performing quick-change magic, and here is how overconfident I’ve become by this point: In my notes on this game — between such observations as “Is there a beer that will make me feel like I’m not at a party with Pitbull? I would drink that beer” and “This week on an all-new NCIS Colon Los Angeles: LL Cool J hates clowns” — I write “The Bengals are magic.” Subsequent circumstances have spared you whatever riff of which that might have been the seed.

Two Chargers fans have materialized in the booth under the Bengals-Chargers TV. It’s not clear if they’ve met before, but I’m watching them start to bond. One guy seems to speak almost entirely in superlatives and indie-rock band names.

Over on CBS, former New Orleans Saints defensive tackle Anthony Hargrove insists to James Brown that “there was no bounty program” while wearing a cuddly Polo pullover the color of a baby’s bath toy. Would a man dressed in this non-threatening, receiving-blanketish shade of blue deliberately hit another man for money? I think not, I say to myself.

Maybe the magicians were bad luck. Magicians work with evil forces. Either way: In the fourth quarter the Cowboys close the gap in what feels like five minutes — maybe it’s denial, but I almost don’t realize this is what’s happening until it’s happened — and suddenly 2010 Lou Groza Award–winning Cowboys kicker Dan Bailey is kicking a 40-yard field goal with four seconds left on the clock and the ball is in the air and I think, OK, but maybe it doesn’t count if the ball is in the air when the clock runs out?, but no, that’s not a rule, and there is nothing I can do and there is nothing anyone on the field can do and I hate this stupid fucking sport.

Seriously, how have you people done this your whole lives? Shackled your emotional well-being from childhood onward to a game in which outcomes like this are possible? I have been caring about this bullshit for only 14 weeks, and in the words of our nation’s greatest poet, I just, I mean … this is exhausting.. When this season is over, football, we are never, ever, ever getting back together. Like, ever.

Indie-rock Chargers Fan Guy says to his new friend, of some band and its front man, “Their live show is fuckin’ great. He’s a totally different person. He found peyote.”

I have distance now, and I’m not a monster; I can see that the Cowboys needed it more, that this week was about a grieving and shell-shocked team pulling together to win one for the guy whose death they’d been told about as they boarded the plane to Cincinnati, that in some ways the outcome of this game was probably decided before it started, in the moment of silence.

I was not so clearheaded in the moment, though. I was a surly, selfish baby who begrudged them the win.

Two things.
1. You realize this is all because you went to Dallas this week.
2. With those two words, you are officially a football fan.