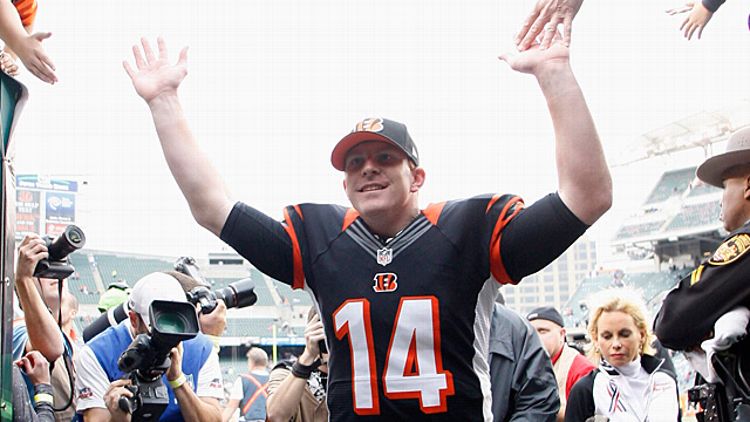 A few hours after the Bengals beat the Giants, I’m in the passenger seat of a blue rental car with Colorado plates, driving to Pasadena with my friend Enrico Fermi, half-listening to the Latin pop hits of yesterday and hoy on Exitos 93.9 FM.

I’ve known Fermi for 14 years. We’ve lived in a lot of the same cities — Boston, San Francisco — but almost never at the same time. You know that person you’ve known forever with whom you’re able to instantly dial back in every time you see him, as if no time has passed, even though for whatever logistical reason he hasn’t been part of your day-to-day life for years in between? That’s Enrico Fermi.

I pretty much owe him everything. Literally — he was the first person to pay me to write something, which means that if there’s a parallel timeline out there in which I’m a bitter B2B copywriter with a WordPress blog (no shots, bitter B2B copywriters; I respect the hustle), it’s probably because that version of me never met Enrico Fermi. But I also owe him in a million harder-to-quantify ways. He introduced me to Teena Marie and Solaris and stayed friends with not one but two of my ex-girlfriends.

Here’s why I admire him: When we’re halfway to Pasadena, there’s a lull in the conversation he and I and the GPS lady have been having, and I sort of jokingly compliment him on the Latin-pop hits, assuming that — obviously — it’s just the station the radio was tuned to when he picked up the car. “I’m learning Spanish,” Enrico says, and for a second I think he’s making a joke, too. But he’s serious. He’s listening to learn-Spanish podcasts and getting word-a-day e-mails. He can’t really speak it yet, but he’s starting to be able to understand it when it’s spoken, and now when he listens to Exitos 93.9 he’s able to make out some of the lyrics. It’s as if hearing these words sung is helping him pave that bilingual pathway in his brain. I don’t know anybody else who does stuff like this.

“Also, I can now tell you, definitively, what I think of, like, Luis Miguel. Luis Miguel is a cheeeeeeeeseball,” he says, pronouncing the word so it stretches across a whole intersection. “He’s like the Mexican Lou Rawls.”

I watched the Bengals game at home with my daughter, who sat riveted when she wasn’t doing giggly top-rope drops on me from the arm of the couch. She’s 2½; I realized about halfway through the game that this was basically our first sustained shared viewing experience of anything that isn’t Yo Gabba Gabba.

Look, I know teaching a kid to root for the Bengals is a form of child abuse, OK? I know. I promise that when she’s old enough I’ll explain to her that we were doing it ironically. Not today, though. “Say ‘Go Bengals,'” I’d say to her, and she’d say it back.

During commercials we pretend to take naps and shoot camera-phone self-portraits — her in her glow-in-the-dark dinosaur pajamas, traces of blue paint and raspberry at the corners of her mouth, a weird scab between her eyes like a bindi. I don’t look much better. I’ve allowed her to stick Halloween stickers on my face and I’ve got little cartoon Frankenstein eyes under my real eyes.

“They tried to get the ball from the other man and then they fell down,” she says after every play. We’re at about the same level in terms of our understanding of the mechanics of this game.

But that is what’s happening. The Bengals get the ball from the Giants. Andy Dalton throws a career-best four TDs and my dude Vontaze Burfict tackles many men and they fall down. Vontaze Burfict is really putting it all together at the next level right now. That turn of phrase isn’t mine. It’s from here and I love it. Putting It All Together at the Next Level needs to either be the title of Vontaze Burfict’s first cardio-core workout book or the third album by his Crusaders-esque jazz-fusion band, as soon as possible.

I’ve suffered so much torture over the past five weeks as a Bengals fan that when they play well this week it’s like Abu Nazir is giving me water from a tin cup. Stockholm syndrome immediately kicks in and I’m YouTubing the “Who Dey Rap” (Greg Jackson from Zapp on the beat) and wondering what I’d look like with a full stingray back-piece like Rey Malaluaga’s. In what feels like no time at all they’ve put it away and I make my daughter a grilled cheese sandwich and tell her it’s Growled Cheese, because today we are a Bengals household, and because I am really putting it all together at the next level, dadwise.

The win gives me a lift, renders me undisturbable for the rest of the afternoon.

Around 2 p.m. I’ve peeled off my Frankenstein eyes in the shower and I’m in a van cab heading west to Hillhurst to meet up with Fermi. Synchronicities: I’m listening to random Spotify tunage on my phone and Elliott Smith’s “Pitseleh” starts up just as we’re passing the swirly red-and-black storefront of Solutions Audio-Video, on Sunset near Fountain, where Mike Mills shot the photo of Elliott Smith on the cover of Figure 8. Years later, on what would have been Smith’s 42nd birthday, somebody stenciled his image onto the wall, and for a while, until some numbnuts street artist bombed the whole sign with some half-assed throw-up, you could take pictures of yourself standing next to Elliott Smith and looking sad or pretending to touch his balls or whatever your thing was.

Fine, universe — I let “Pitseleh” play through. I do the thing to myself that Spotify apparently wants me to do. I logged serious hours with this song way back when. It’s such a perfect, selfish, self-detesting, hammered-flat three minutes and 22 seconds; it takes me straight back to pivotal, pitiable moments when I was pretty sure I was the worst person on the planet, usually while I was in the process of breaking up with somebody who would then become Enrico Fermi’s responsibility. Even the fact that it soundtracked a sad montage in that movie where Ben Stiller’s a rabbi and Ed Norton’s a priest and they’re both in love with Jenna Elfman couldn’t ruin it for me, although that movie is fucking terrible.

But it’s a crisp, bright autumn day and my stupid football team won today and so all I feel is a vague nostalgia for the objectively terrible times when “Pitseleh” was the only song that understood me and Jenna Elfman had some heat as a romantic-comedy lead. Even more than summer, fall is a season that wants what it wants, music-wise. It wants Elliott Smith building a little perfect cathedral in which to worship his own pain. I listen to it as a historical reenactment, just to taste the old rotten feelings coded into my mental ID3 tag for this song. I didn’t mean to hurt you. I’m so angry. Give up the thing you love.

Besides, things just sound different this time of year. The Kendrick Lamar record didn’t really come alive for me until Saturday night, outside grilling chicken in the dark and the cold. I’d forgotten my headphones but I played that amazing run from “Bitch Don’t Kill My Vibe” to “Money Trees” through my phone anyway, transistor radio-style, and by the time the chicken was done Kendrick’s huge fanboy debt to Aquemini started to seem like a feature, not a bug. That “Art of Peer Pressure” song is unbelievable. It’s like he’s building an equestrian statue of Three Stacks on Rosecrans Avenue.

I stood there grilling chicken by flashlight and thinking about how someday the piano part on “Art of Peer Pressure” will take me back to grilling chicken by flashlight, on a patio carpeted in dead leaves, the year I started thinking of 50-degree weather as “cold.” It’ll be inscribed, the way you press the name of a tourist attraction into a penny.

I knew Rebecca a little bit in high school, but she went to college with Enrico Fermi and now I kind of know her more as a friend of his. She lives out in Pasadena with her boyfriend, with a pool out back, a blue parallelogram cut into the dark. You can stand next to it and see the lights of downtown glimmering like jewelry in a shop window through a notch in the trees.

So I don’t get out much, and it’s made me bad at meeting people. I get excitable, I get loud. Not aggressive loud, but overly-psyched-to-be-talking-to-adult-humans loud, it’s-like-I-was-saying-the-other-day-to-a-volleyball-I-have-painted-a-face-on loud. Plus when I do go out I’m usually with my wife. We’re a good small-talk team; we have an unspoken conversational division of labor not unlike the no-huddle offense pioneered by the late-’80s Bengals under Sam Wyche, and talking to strangers without her there is like trying to play lead and rhythm at the same time. I hear myself being weird and then I get self-conscious about how weird I’m being and I stammer like I’m lying.

Which is stupid, of course. Nobody really knows me here except Enrico Fermi. And I meet people, and at least for a little while I enjoy being a stranger. Nobody knows I’m a huge nerd. There’s a whole shelf of comic books in the living room, Rebecca’s boyfriend’s collection of Cerebus and Transmetropolitan in trade paperback, and ordinarily I’d be all over that, conversationally, clinging to the topic like a life preserver just to have something to say to somebody, alienating everyone in the room who doesn’t care who Warren Ellis is. But I decide that for once in my life I’m not going to bludgeon people with my stupid interests and I don’t bring up the comics at all. Comics? Yeah, cool, whatever.

Instead I let everyone believe that I’m a guy who works for ESPN and writes a weird column about the Cincinnati Bengals every week. “Big win today,” one of the men says, and I say, I know, right?, at least briefly OK with letting that be who I am.

We Went There: The USMNT's Eastern Promises