I Suck at Football 2.13: Twice Exceptional 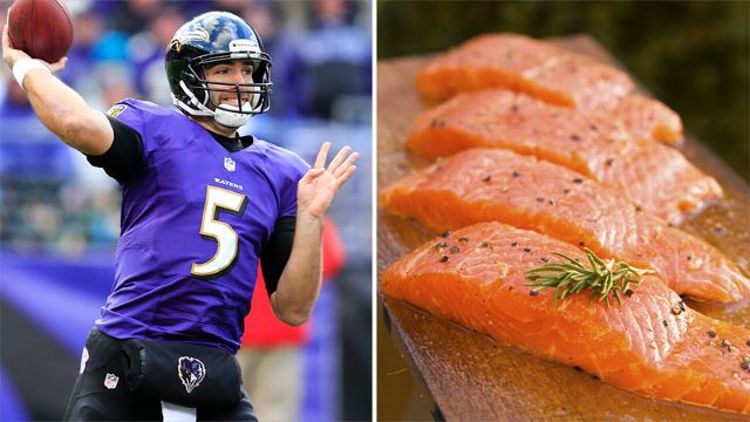 I’m losing. It’s happening in increments, but it’s unmistakable. It’s only Sunday and the week is slipping from my grasp. And I feel fine about it.

I’m down at the end of the bar at Ye Rustic, tennis-matching between two adjacent TVs. Left hemisphere: The Miami Dolphins battle the Carolina Panthers, who I’m hoping will triumph thanks to the performance of running back Mike Tolbert — solely, if possible. Right hemisphere: The New York Jets face the Baltimore Ravens, led by Lords Disick starting QB and human cargo-pant Joe Flacco. It’s a little over 12 minutes into the first quarter, the score has just gone from 16-9 Acolytes to 24-9, and Cam Newton is already spitting up blood after getting drilled on his first snap of the game while throwing the ball to someone who is not Mike Tolbert. “I had to feel around for it for a minute, and I felt it so I was good,” Newton will say later, “it” being his own tongue. The Panthers will eventually recover; the Lords will end up feeling around for their tongues.

And yet I feel fine. I feel better than fine.

I’ve recently been diagnosed as learning-disabled and it has caused me to rethink my whole life. Well, OK — “my whole life” is a little strong. So, for that matter, is “diagnosed.” The word “diagnosed” implies that there was some sort of test or formally credentialed person involved, which there was not. But on Wednesday I had breakfast with my sister, who’s in grad school, and before the eggs even hit the table she told me, “I think I figured out what you are.”

This conversation started almost a year ago. We were driving from L.A. to Palm Springs and she was telling me about the teaching-certification program she was in. She’s learning how to work with learning-disordered kids. She was one of those kids, at one time. At some point she got tested, support structures got into play, school became a little less of a struggle. That day in the car, I told her I’d come to believe that if I were entering fifth grade today, I’d be at minimum a card-carrying dyscalculic and would most likely also be “like, on pills for brain stuff,” is I think how I put it, because I’m a professional word-writer.

Here is the most embarrassing thing I will ever cop to in this space: I went to a private school for gifted children. I took a test when I was 5, put the right geometric-shaped blocks into the right geometric-shaped holes, and spent the next few years dicking around at a gradeless, structureless New Age feelgoodery in the suburbs south of San Francisco. I was dicking around with BASIC and playing in the woods and dressing up like an alchemist and calling my teachers “Lynn” and “Rich” while you were — I don’t know, maybe learning how to do math and be on time for stuff? I’m probably a writer today because I went to a school that didn’t see anything weird about encouraging an 8-year-old to think of himself as a writer. But I missed out on some things.

And then in the seventh grade I transferred to a school in the city, which (while still private and cushy and for smart kids) was basically Parris Island compared to my old school, in that they gave out letter grades, and shit got real. Suddenly my total hopelessness w/r/t anything that involved long-term planning or time management or numbers or was hard or boring became an actual concern, as opposed to proof that I was a special unique snowflake. The rap came down: I was a smart kid but did not Sufficiently Apply Myself. In fairness, I had other things on my mind. I was the most soft-batch 12-year-old you’ve ever met. My favorite X-Man was Doug Ramsey and I still talked to my stuffed animals and I did not understand that these things would have a social cost until it was almost too late.

I survived the next two years and entered high school somewhat better-equipped to live among Earth people, but I hadn’t gotten appreciably better at any of the parts of school that didn’t interest me. I got Cs and Ds in anything that wasn’t about words. I got grounded after every report card. I took chemistry twice and failed it both times; I still have nightmares about Mole City. I somehow managed to graduate anyway, attended the prestigious institution known to job-applicant reviewers as Some College, and eventually became America’s greatest football columnist.

But at no point throughout my academic career did anybody raise the possibility that my problem wasn’t that I hadn’t been yelled at enough about my shitty grades. This didn’t happen until this week, when I sat there drinking coffee with my sister and listened to her tell me about the term “twice exceptional,” or “2e.” Basically it’s when a gifted kid’s stellar potential masks a learning disability of some kind. Undiagnosed, it can lead to depression and social anxiety (“Hmm,” I said) and also lonerish behavior (“Go on,” I said) and difficulty finishing big projects (“You don’t say,” I said) and even being bad at returning phone calls. That’s me in the corner! I’m twice-exceptional!

I don’t want you to get the wrong idea: This isn’t a story about what a genius I am. This is a story about what a genius I am and the near-crippling undiagnosed psychological ailment I’ve had to overcome without even realizing I was overcoming it. Who’s laughing now, editors and agents and ex-girlfriends and family members and every other person in my life who’s ever found me to be kind of a pain in the ass to deal with? Maybe there were pills I should have been taking! Coping strategies I was not provided with! Feelings of worthlessness I should have been encouraged not to internalize!

I know this seems like a weird thing to get excited about. I’m a 36-year-old college dropout and I get paid to write and the ship has pretty much sailed on me ever needing to pass Algebra II again. (As my wife put it, dryly, when informed of my diagnosis: “Great. Do we need to install a bar in the shower?”) But I also have a kid, and she’s hyper-verbal for a 3-year-old, and if she turns out to have some corresponding cognitive Kryptonite-vulnerability I want to know how to help her, and on some level knowing this about my own brain makes me feel more prepared to do that.

Plus, have I mentioned that nothing I’ve ever done wrong is my fault? Because if I’m correctly interpreting these journal articles my sister sent me, it isn’t. 2e, bitches! Of course, it’s possible that I’m not reading these articles correctly. Also not my fault. I have a thing! I have a specific thing wrong with me, and it has a name, and somehow just by knowing its name I’ve triumphed over it, which means that Wolfgang Pauli or no Wolfgang Pauli, I walk into the Rustic on Sunday feeling like I’ve already won.

I watch the Ravens and the Panthers. My immediate seatmates are a girl and a guy who are watching the Chargers and the Ravens. We talk; I explain why I’m so focused on this meaningless Ravens game. “Why is Flacco your quarterback?” the girl asks. I tell her about the auction draft, how I lost all my fake money. “An auction draft — that’s tough for a first-timer,” she says. And she doesn’t even know about my condition.

This is what I always do. But everything is different. Even this room looks different to me now. It’s obvious that even though the Bears are losing to the Rams right now, the Bears fans over by the front door of the bar are deriving more emotional satisfaction from their game-watching experience than anyone else here. They’re the most excited group in the room, the most obviously communal. They sing their bear-down song. Did I consciously choose to root for the Bengals, a team no one outside of Ohio cares about, because it wouldn’t require me to be part of something? Was I accidentally-on-purpose figuring out a way to turn the communal pursuit of football-watching into a weird, solitary pursuit, because I’m alienated, because of the thing I have? I’m going to go ahead and say yes!

Lately, after having it brought to my attention by my friend Erwin Schrodinger, I’ve been reading a lot about the concept of “phantom time.” Basically, it’s the theory, advanced by several German historians, that about 300 years of history — the 600s through the 900s, roughly — didn’t actually happen, and were possibly inserted into the official record by the Roman emperor King Otto III and/or other calendar conspirators. To accept the phantom time hypothesis you have to believe that Charlemagne didn’t exist — a revelation possibly forecast by the appearance of a song called “Kid Charlemagne” on a Steely Dan album called The Royal Scam — and explain away 300 fairly action-packed years of Chinese and Islamic history. Also, go figure that it’s the Germans who are on the cutting edge of This Period Of History Didn’t Happen Studies.

I don’t know if I even remotely believe any of this. If at some point we can conclusively prove that it’s actually the 1700s and not the 2000s, would that change anything? Would we start having conversations about how the Wu-Tang Clan peaked in 1698? Or would something about having one of the governing assumptions of our lives overturned lead us to question every other assumption we’ve lived under? And I was told over and over that my issues in school stemmed from me being irresponsible or lazy or thoughtless or stubborn, from refusing to Apply Myself. And I think I took all that on, and actually kind of became that person. But what if none of it was real? What if it was all phantom time? What happens when we tell ourselves a different story about ourselves?

He really goes in with that salt shaker. I think he cures the fish right there at the bar. Cures it of what, is the question. I don’t mean to specifically impugn Ye Rustic as a fine-dining establishment, but salmon on Sunday is kind of a “Rex Kramer, Danger Seeker” order regardless of where you unfold your napkin. But maybe that’s just what I think because I am not yet truly about this life, the life of the bar-eater, the way Jack-Daniel Duncanhines is. Maybe JDD actually knows what’s up. Maybe he’s realized that there’s nothing in bars that won’t kill you. Maybe getting the salmon is the act of an advanced realist.

About Last Whatever: Iron Bowl Chaos