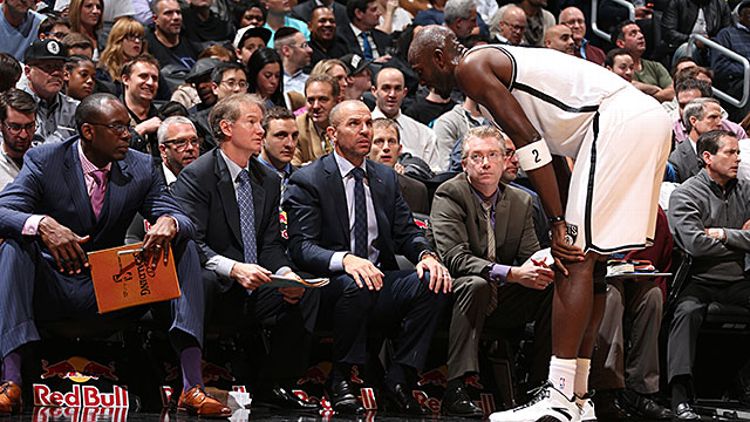 There was no time to print new programs before last night’s game between the Nets and the visiting Nuggets: There, on page 28, was Lawrence Frank’s name, first among the six assistant coaches listed. Good-bye to all that. Just a few hours earlier, Frank had been reassigned from bench duties “to doing daily reports,” which presumably means he will now be undermining Jason Kidd’s authority in writing on a daily basis. It’s easy to make up some reason Frank lost his place in Kidd’s inner sanctum — perhaps it was all those times Frank rolled his eyes and air-jerked during Kidd’s halftime team talks. Or maybe the “philosophical differences” that divided Frank and Kidd boiled down to the fact that Frank actually had a philosophy. The harder part to process is why Frank remains in the building at all.

Just a few months ago, I would have never cared about any of this. I was perfectly content watching the Nets from a safe, neutral distance. The only person in the organization I was remotely curious about was Mikhail Prokhorov, mostly because of my hobby fascination with post–Cold War economies. But shortly after the Nets torpedoed the future to acquire two-fifths of Ubuntu, I found myself on their team website, studying ticket packages for the upcoming season. I remember looking out my office window and regarding the fine, possibility-rich glint of a summer day, and convincing myself this was a totally reasonable investment in my future happiness. I convinced my friend Reihan that Nets tickets would improve his life as well and, a few bank transfers later, an official Brooklyn Nets thumb drive and a card loaded with all our tickets arrived in the mail. I began to give a shit about Mason Plumlee and Tyshawn Taylor, I saw wisdom in the signing of Shaun Livingston, I parsed the enigma that is Andray Blatche. I looked forward to Jason Terry doing the jet thing and punching his chest within seconds of his Brooklyn debut. I couldn’t wait to watch Kevin Garnett and Paul Pierce again on a consistent basis. I began to receive weekly emails from the Nets and Barclays Center gauging my emotional responses to sponsors, security companies, party supply outlets.

It wasn’t until one of the preseason games that I remembered I had just made a massive commitment to watch the Nets play basketball for the next half year. At a certain age, you lose the ability to assimilate a new team into your worldview unless there’s something truly tragic or unusual about them. The Nets rise to no hyperbole. They are a collection of players who mostly inspire in me feelings of deep ambivalence, mixed with a few who appeal to those nostalgic for the early ’00s. And what if it didn’t work? Few of these pieces could be flipped for anything better.

It seemed strange that Jason Kidd somehow talked his way into the job while speaking only in platitudes. But a franchise that relocates such a short distance needs to maintain some feeling of history or continuity, and maybe that’s why he received the loudest ovation when he was introduced last night before the opening tip. After all, what was “Sodagate” if not a sign that Kidd wanted to win by any and all means necessary? His makeshift lineup put in a spirited first shift but, by the second quarter, Denver’s speed and athleticism took over. Kenneth Faried started to do Kenneth Faried things. Timofey Mozgov looked all-world. Talk in the stands turned to whether P.J. Carlesimo had been all that bad of a coach, whether the Nuggets would possibly take Carmelo back for the pieces they had gotten. Dizzying permutations of Nate Robinson, Andre Miller, Ty Lawson, and Randy Foye took turns disheartening the Nets’ backcourt. Despite all this, the Nets were down only eight going into the half; everything was still within reach. Maybe Lawrence Frank had been the one who wasn’t letting Mirza Teletovic be great. Or maybe, as one guy kept shouting: “Reggie Evans ain’t done yet!”

Last night was also Jewish Heritage Night at Barclays; thus the massive menorah made of basketballs — the only one in the world, we were assured — glowing on one end of the arena. “Hasidic singer Benny Friedman!” delivered the anthem. During halftime, we were encouraged to stay in our seats and take in the smooth stylings of a local a cappella group called the Maccabeats. They launched into a barbershopped version of “Burn.” (Ellie Goulding, not Usher.)

“I think a general principle in life,” Reihan remarked, “is to give people what they expect from you.” If someone in the next cubicle laughs demonstratively, for example, you are expected to ask what’s so funny, and maybe you should just go ahead and do it even if you couldn’t care less. “Similarly,” he continued, “if you’re a Jewish a cappella group, give us a Drake song.” I laughed. Then I felt genuinely sad when the Maccabeats left the court without cross-fading into “Hold On, We’re Going Home.”

There was some wisdom to what Reihan said. Brook Lopez is a gigantic human being; ergo, he simply exists closer to the rim than most other people within his profession. Was it too much to expect more than one rebound in the first two quarters? Jason Kidd has spent approximately two-thirds of his life playing basketball at an extremely high level. Is it unreasonable to imagine a world in which halftime adjustments resulted in improved effort and execution, rather than total evisceration? Instead, the Nets looked like they had spent the interval watching Frances Ha.

With a little under three minutes to play in the third quarter, the crowd turned on Kidd and/or his players. Perhaps our expectations had been too high for a team that is, even at full strength, fairly old and slow. Reading “body language” is always a tautology, but there was something hilariously awful about the hunch-shouldered, arms-akimbo Nets on one side, the Nuggets body-bumping each other into dust a few yards away. Twenty-five up, the Nuggets were still moving the ball with purpose, looking for better matchups inside, finding the open man for the corner 3. Only Evan Fournier was treating this like garbage time. There was no angst, just a growing sense of resignation. I looked down the aisle and a guy in a Drazen Petrovic T-shirt was streaming the Duke-Michigan game on his phone. Even worse than jeers, booing, fans leaving early in disgust: indifference.