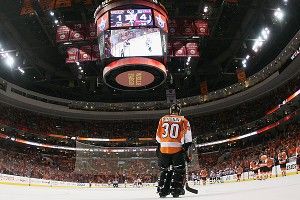 The first round of the NHL playoffs is quite possibly the two best weeks in all of sports. Yes, the Stanley Cup finals are nice, in that endlessly drawn-out “Why are they taking a week off before it starts?” way that the NHL insists upon. But the first round is pure adrenaline. It’s the very best the sport has to offer, every night, served up through a fire hose for two straight weeks.

And this year’s version might have been the most exciting in recent memory. It seemed like every game involved either overtime or a brawl or double-digit goals or some combination of all three. For fans of the 16 teams that made up the first round, the last two weeks have been amazing.

That’s the unfixable flaw of playoff hockey. When the game is at its very best, almost half the league’s fans are standing by, hands in pockets, awkwardly shifting their weight back and forth and wondering if we’re allowed to make eye contact. Watching your team in the playoffs is exhilarating and excruciating and all-consuming. Watching everyone else’s team in the playoffs is something altogether different. It’s awful.

More specifically, it’s awful because it’s not even all that awful. When your team is involved, the NHL playoffs are weeks and months of unbearable misery, punctuated (maybe) by occasional joy. For one team, that misery ultimately leads to a victory that makes it all worth it. For everyone else, it builds to the crescendo of an eventual crushing defeat that leaves deep emotional scars that may or may not someday heal.

So everyone whose team makes the playoffs is miserable the entire time. If you ever notice somebody smiling while watching their team play an NHL playoff game, they’re either a bandwagon-hopping fraud or a psychopath, and in either case you should probably just preemptively stab them.

But at least those fans get to be part of the ride. Playoff hockey is misery, sure, but it’s the very best kind of misery. Meanwhile, the rest of us have to fake it, pretending to be enjoying the show while secretly trying to figure out whether any of the remaining teams could actually win the Stanley Cup without making us want to slam our fingers in a car door. (Spoiler alert: nope.) It’s our penance for the sin of cheering for the league’s also-rans. And as a Toronto Maple Leafs fan, I know that some of us have more practice at this than others.

You know how every diehard has their own playoff ritual? Here’s mine: Before every series, I’d get a blank VHS tape and pop it in the VCR. Then I’d nervously fidget with the remote control during every game, hitting record whenever something interesting started to happen. It was my superstition, my coping mechanism, and it helped me through 10 postseasons and four trips to the conference finals in 12 years.

You’ll have noticed the use of the past tense. Here’s a question: Do they even make VHS tapes anymore? Where would I get a VCR these days? I’m sure I could buy one on eBay for 15 cents, but would it plug into any TV in my house? Probably not. I have a cherished postseason ritual that relies entirely on technology that doesn’t exist anymore. This is what it means to be a Maple Leafs fan in the post-lockout era. No wonder we’re all so cranky.

And yes, there are worse fates than watching an NHL playoff that doesn’t include your team. You could be studying for finals, or getting a root canal, or watching the NBA. And sure, you could try to dull the pain with playoff pools and gambling, and you can tell yourself that it’s kind of fun to be able to watch whatever game you want on any given night. But it never quite works. It’s not fun.

Now that the first round has ended, eight more teams have been eliminated. But at least those fans had one series. They were at the dance. And in the rounds to come, they can still draw on the fresh pain of that bitter defeat as they channel all their hockey fan energy to rooting against the team that eliminated them.

(And make no mistake, every fan wants to see the team that eliminated their favorite team lose. We say things like “May the best team win” and “At least we’d know we were beaten by the best,” but deep down we just want to see two things: The team that beat us losing, and a postgame close-up montage of their fans looking stunned and crying.)

So for those whose teams are still alive, or for those still coming down off the high of Round 1: Remember those who never got a chance. Maybe, if your playoff-hardened heart allows, even spare a moment to pity us.

And then, it goes without saying, forget all about us. After all, there’s a playoff run to watch. When you’re still tearing up the dance floor, there’s not much time to waste worrying about the sad-sack losers lining the gymnasium wall.

Besides, you can bet that we’ll do the same to you when it’s our turn in the spotlight. And it will be … next year. Or the year after that. Or some far-off distant year after that.

Or, you know, whenever we figure out how to get this stupid VCR hooked up.