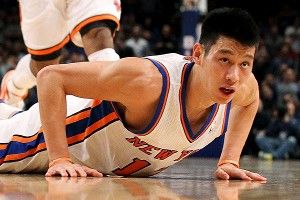 Hey, have you recently been enjoying watching Jeremy Lin play basketball for the New York Knicks? Me too! It’s been so much fun! But I also suffer from an unredeemable, sometimes-I-even-surprise-myself level of neurosis, which means every once in a while, when I watch Lin do something magical and awesome, I can’t help but think: BUT WHAT IF IT ALL GOES AWAY? He’s been killing it for long enough now that there’s no rational reason to think that it will, of course — but who’s talking rationality? We’re dealing with “unlikely worst-case scenarios” here, and I don’t want you, my fellow crazy people, to be caught off guard. If the wild Lin ride does end, I think you should be mentally prepared to handle it not as I was very recently planning on doing — by crumbling into a heap of tears and darkness and Peeps-binging — but, rather, calmly and with courage. Therefore, I’ve gone ahead and prepared a plan of action for five possible Lin disasters. Come, let’s guard our minds.

Scenario no. 1: The collective rage of other NBA point guards drags him down
Here’s Deron Williams, after the Nets’ win over the Knicks on Monday: “I don’t really watch SportsCenter and I don’t really watch too many games. But when I went on Twitter and people were tweeting at me, every three lines was ‘Jeremy Lin destroyed Deron Williams,’ so I definitely took offense to that from the first game. Like I said, I had it circled.” (The Knicks beat the Nets in Lin’s breakout game earlier this month.)

How did that ire fuel D-Will’s performance? Oh, he just drained eight 3s as part of a 38-point night. So what if this is just the beginning? What if Chris Paul and Rajon Rondo and every other awesome point guard in the league gets sick and tired of hearing about this Jeremy Lin guy and diligently focuses on taking him down? Would even Magic Johnson have been able to defeat that level of mental acuity from opposing guards?! This is an alarming possibility.

OK. Deep breath. If scenario no. 1 goes down, focus on the positive: Every night, the Knicks game will become a showcase for point guard play at its highest aesthetic level. Doesn’t that sound like a delight? Yes, it might be hard to appreciate while you’re hyperventilating for poor Jeremy Lin. But focus on those crisp bounce passes and sound fast-break decision-making, and you may well soon find yourself loosening your fingers from your couch armrest terror-grip.

Scenario no. 2: Carmelo gets in the way
Melo’s only been back in the lineup for one game since Lin took off. The Knicks did lose that one, but it was, you know, one game, so results are inconclusive as to whether he’ll become the Lin-dampering ball-movement-stopper so feared. But if this prophecy of doom does come to fruition, at least we’ll have a conclusive answer to this eternally elusive question: What kind of player is Carmelo Anthony? And that answer would be: The jerk kind who messes everything up and is always ruining fun. Again, it’s not much, but finding positivity in the muck should help soothe those nerves of yours.

Scenario no. 3: Injury
You know what’s better than an underdog story? A double underdog story. So Lin goes down with a terrible foot injury that keeps him out for six months. Guess what he’ll be like when he returns, I bet? Even better at playing basketball, but now with 100 percent more perseverance. Strike him down, foot injury, and he will become more powerful than you could possibly imagine.

Meanwhile, for Knicks fans, Baron Davis is right there. Yeah he’s a little bit older, a little bit beardier. But he’s still Baron Davis. And he was the designated savior a mere two weeks ago.

Scenario no. 4: Appropriation as Signifier becomes too much, escapes to cabin in South Dakota
As Jay Kang writes on this site, “[Lin has] been hijacked to promote some other agenda. But to strip Jeremy Lin of his status as the Great Yellow Hope not only seems dishonest and lazy, it also deprives the community he represents — willfully or not — of the unabashed joy of seeing one of its own succeed in the most improbable arena.” But what if our dude buckles under the burden of representing millions? And then, as logic would dictate, escapes to a cabin in South Dakota to live a life of bearded solitude and introspection? Well, it’d be a drag to never again see him lob a perfect alley-oop to Tyson Chandler, or to yank one of those “I GOT THIS SHIT” off-the-dribble 3s, for sure. But again, focus on the silver lining: The inevitable long-form magazine pieces on this would be incredible. Like, so, so good.

Scenario no. 5: He runs out of Michael Jordan Space Jam secret stuff

Easy fix here. Just let me talk to him. I will say: “It was just tap water, Jeremy! You had the secret stuff inside you all along!” and then he’ll go back to straight crushing people.