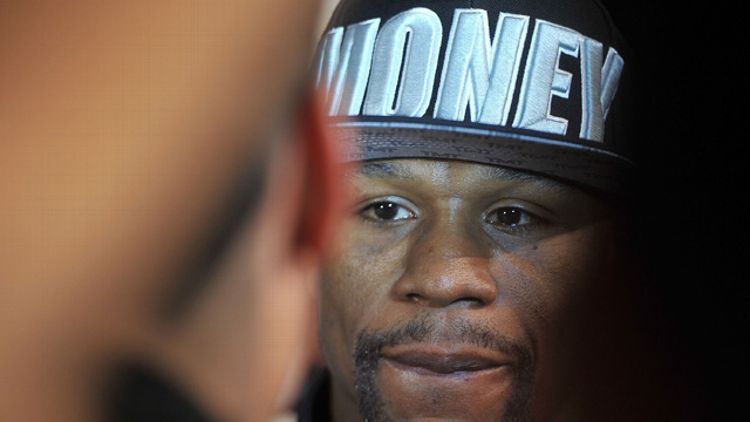 With apologies to Bernard Hopkins, Richard Alpert, and the girls of Lee High School, everybody gets old. The notion of an athlete growing old “overnight” is mostly a myth; it almost always occurs gradually. In the case of boxers, sure, one punch can ruin a man. But typically, that one punch was the logical successor to dozens of other punches, spread over several fights, that the boxer in question would have slipped in his younger days.

Floyd Mayweather is 36 years old. He’s 43 fights and 315 rounds into a professional career that began in 1996, when he already had 90 amateur fights to his credit. And none of those numbers account for sparring, the silent assassin in the boxing aging process. That Mayweather remains undefeated after all this time is remarkable. While his detractors will point out that he frequently found excuses not to fight the most threatening opponents, only a boxer with all-time, stratospheric skills could have run the particular gauntlet that Mayweather has and never once experienced defeat.

But when he last fought, in May 2012 against a Miguel Cotto who was himself on the shadowy side of his prime, Mayweather showed more definitive signs than ever before that he had outlived his youthfulness. His legs looked heavier. He got hit more than usual. He lost more rounds than usual. He bled the way mere mortals do when they get punched repeatedly in the nose. (And you know what’s possible with things that bleed.)

Tomorrow night, Mayweather will enter the ring looking for win no. 44 against Robert “The Ghost” Guerrero, a steady, versatile boxer/puncher/pressure fighter who is in his physical prime at age 30. Mayweather will be 364 days older than he was against Cotto, with 64 of those days spent in the Clark County Detention Center without access to bottled water.

Mayweather likes to point out that there is no blueprint for how to beat him, because nobody has done it. There is, however, a blueprint for how to nearly beat him, and there is also a blueprint for how to hurt him. If he hasn’t aged significantly from his last fight to this one, then those latter blueprints are the best that Guerrero, a +475 underdog at the MGM Grand sportsbook, can hope to follow. But if Mayweather has in fact lost an additional step in the past 12 months, it just might open the door for Guerrero to establish the blueprint that hasn’t existed until now.

Don’t let Guerrero’s relative anonymity or the fact that he was a mere featherweight five years ago fool you. The Mayweather of this moment vs. the Guerrero of this moment is very much a real fight (with a real undercard, by the way, topped by an excellent Abner Mares–Daniel Ponce DeLeon showdown). And even if the #BeatFloyd hashtag Guerrero and his people have been pushing borders on the unrealistic, equally unrealistic are any of the usual declarations from Mayweather that Guerrero is going to be “easy work.”

Before you can even think about #BeatFloyd, you have to figure out how to #HitFloyd. Mayweather’s defense is an enigma wrapped inside a shoulder roll wrapped inside a pull counter. To land multiple punches in combination is nearly impossible. However, it’s been well established that throwing punches in combination, even if you know most of them are going to miss, gives you your best chance at accomplishing something on offense.

Watch how Jose Luis Castillo, the man who created the aforementioned blueprint for nearly beating Mayweather (he lost a controversial decision in their first fight and a fair but narrow decision in the rematch), fought him in the final minute of the 11th round of their first meeting, a representative sample of the good work Castillo did throughout the bout:

If you’re willing to eat some punches, including the counters that you open yourself up to when you focus on banging Mayweather’s body, you can get things done against him — even in the center of the ring, where Mayweather theoretically wants to be at all times. You have to get close, which Mayweather will allow because he’s confident in his defensive skills, keep punching, and not worry about landing everything.

But like every element of a strategic guide to being competitive against Mayweather, this comes with an “easier said than done” disclaimer. The defense is just so hard to crack, and you can forget about doing it with an economic approach. Mayweather’s left arm protects his body, his left shoulder protects his chin from the opponent’s right hand, and his right glove protects his chin from the opponent’s left hand (while sometimes crossing the chin to protect on the other side). What remains are small windows of opportunity under Mayweather’s right elbow and on his left temple.

Or, if you’re at just the right angle, you might be able to sneak in a straight shot to his chin or nose, which is the pugilistic equivalent of threading a pipe cleaner through the eye of a moving needle. Here’s Cotto pulling it off, roping a quick right hand above the low left hand that protects Mayweather’s body and between his rolled left shoulder and high right glove:

Of course, it must be noted that Guerrero is a southpaw and Cotto fights in a conventional stance, so the angles that Cotto used won’t really apply to him. That’s not necessarily a bad thing, though, since two of the three times Mayweather has been visibly hurt in the ring (not counting when he has hurt his own hands punching people) have come against lefties.

The first was against DeMarcus “Chop Chop” Corley in 2003, who landed a two-punch combination, a wide right, and then a straight left:

The second came in 2006 against Zab Judah, who in the second round scored a flash knockdown that wasn’t counted:

… and then in the fourth round stunned Mayweather for just a moment with a straight left:

As these clips show, the best way to hurt Mayweather (or anyone, for that matter) is to punch when he is punching. As diligent as Mayweather is defensively, he does tend to drop his right hand ever so slightly as he loads up for a hook. Here’s Cotto landing a clean left by hooking with Floyd:

And here’s Guerrero landing a flush left against Andre Berto when Berto drops his right hand:

Of course, it won’t be that easy against Mayweather. Floyd almost never drops his right as low as Berto did. And the fact that Berto used a shoulder-roll defense for much of the fight is beyond irrelevant. Berto does as much justice to the Mayweather defense as Sheryl Crow does to “Sweet Child O’ Mine.” Guerrero beating Berto in no way proves that he can beat Mayweather.

But it’s the way Guerrero won — by smothering Berto, by dishing out real punishment, by taking Berto’s best shots without issue — that should give Mayweather at least a moment of pause. Guerrero used to rely primarily on his long-range boxing skills, and there’s no way in hell he’s outboxing Mayweather. But if he can fight like a southpaw version of Castillo? And if Mayweather isn’t nearly the guy who fought Castillo more than a decade ago? Then this gets really interesting.

Ten years ago, Roy Jones, then 34 years old and as highly regarded as Mayweather is today, fought southpaw Antonio Tarver for the first time. All the things Jones had done to dominate opponents for nearly 15 years suddenly stopped working, and for pretty much the first time as a pro, he had to call on heart and grit to pull out a close, controversial decision.

Stylistically, Mayweather is very different from Jones. Jones was so outrageously athletic in his prime that he could get away with committing technical sins. When his athletic advantages eroded, his fall from pound-for-pound king to journeyman was startlingly precipitous. Mayweather relies on exquisite technical skills, and that means he won’t decline like Jones did. It might mean his Jones-Tarver I experience will be spread over a few fights, maybe even a few years.

The Cotto fight offered a taste of that experience. The Guerrero fight feels like more of the same. And if the past 12 months have been unkind to Mayweather — something we can only guess about until the bell rings on Saturday night — Guerrero might be in the right place at the right time to force Mayweather to dig deeper than ever before. #BeatFloyd? Still a long shot. #BeatUpFloyd? Not a long shot at all.

Game 6 Madness: The Keys to a Killer Night of Playoff Basketball