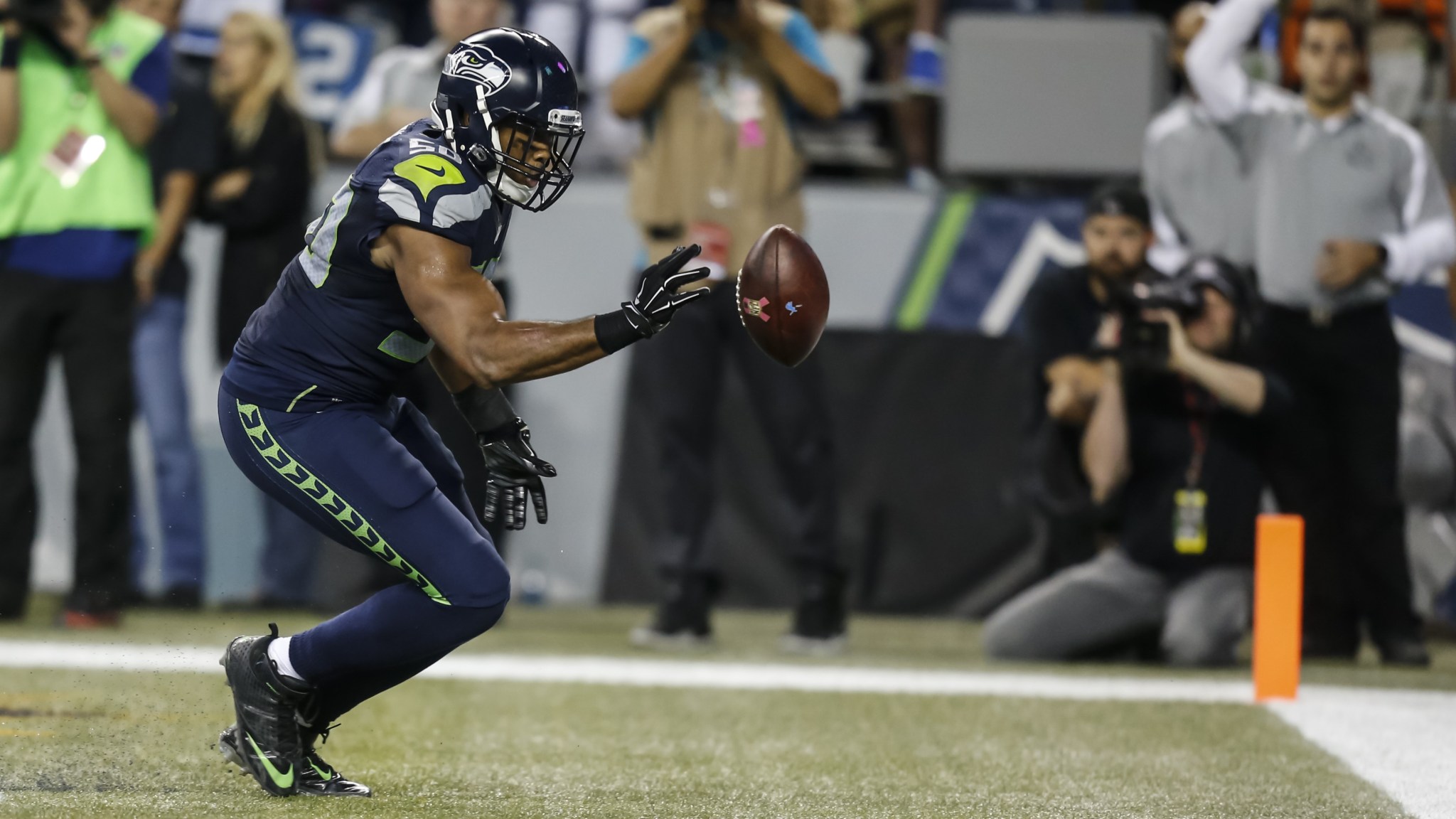 It happened again. Three years after the Fail Mary, the Seahawks were bailed out on Monday Night Football by an officiating mistake at the most critical moment of the game. While this call wasn’t as significant a game-decider as the one the replacement officials made against the Packers in 2012, it was an even more egregious mistake. It overshadows a game-saving play by Kam Chancellor, which itself overshadows a gutsy effort from the visiting Lions.

First, the blown call. With Calvin Johnson stretching for the end zone, Chancellor managed to time a Charles Tillman–esque punch perfectly and knock the ball out of Megatron’s hands, sending it into the end zone. With a free shot at recovering the fumble, K.J. Wright then chose to bat the ball through the back of the end zone, with the officials awarding the Seahawks a touchback and possession of the ball on the 20-yard line.

As you already know, this was a botched call. Wright should have been called for illegal batting — it’s against the rules to intentionally bat a ball in the end zone — which would have given the ball back to the Lions with a new set of downs from the six-inch line. Given that the back judge was perfectly placed to see Wright’s bat, the only logical explanation is that he assumed Wright’s move was unintentional and that the ball was accidentally knocked out of bounds. Wright admitted after the game that he did purposely knock the ball out of play, saying that he wasn’t aware of the illegal batting rule until afterward.

Truthfully, I don’t think there’s a ton to say about it. There’s no debate to be had. It’s a blown call at the worst possible time. I’ve seen suggestions that the officials should have been allowed to overturn the call during the subsequent turnover review, but I don’t think that’s a good idea. Judging intent is hard enough to do in real time; deciding whether a bat is intentional on replay would be one of those quasi-judgment calls like pass interference or forward progress, and I don’t think that’s a great thing for officials to judge in slow-motion replay. That would create even more controversial calls.

In terms of game impact, it was an enormous swing. ESPN’s Brian Burke, formerly of Advanced Football Analytics, used his win expectancy model to point out just how dramatically Seattle’s fortunes depended upon both Chancellor’s forced fumble and the blown call:

To put that in context, consider what ESPN’s Football Power Index said about Tom Brady’s four-game suspension before it was overturned. FPI calculated that the total drop-off between Brady and backup Jimmy Garoppolo would have amounted to 0.78 wins over the first quarter of the season. That’s not per game. That’s the total figure. The officials gifting the Seahawks possession of the football at the end of this game is only a tiny bit less significant than it was for the Patriots to get Brady back for the first four games of 2015.

The bad call masks how incredible Chancellor’s forced fumble actually was. It saved the Seahawks from dropping to 1-3 ahead of a trip to Cincinnati, where they’re currently listed as one-point underdogs. A loss there and the Seahawks would have started their season a lowly 1-4. Just nine teams since the AFL-NFL merger in 1970 have started their season 1-4 and made it to the postseason, most recently Tim Tebow’s 2011 Broncos. In this scenario, the Seahawks would likely have been three games behind the Cardinals with 11 games to go; that wouldn’t have been insurmountable, but it would have left Seattle with a mountain to climb to claim the NFC West.

You could forgive Lions fans for being upset at the moment, given that they were knocked out of the playoffs by the Cowboys last season after a controversial no-call when a pass interference flag was atypically picked up. It will certainly be a crushing blow to the Detroit players, who showed up in Seattle as 10-point underdogs and played like their season was on the line.

Despite missing the two best players from their 2014 defense in Ndamukong Suh (who left for Miami in free agency) and DeAndre Levy (still out with a mysterious hip ailment), the Lions went into Seattle and delivered a performance that would be in line with their best from the 2014 season. Their pass rush had been virtually nonexistent through the first three games of 2015, producing just four sacks and 16 quarterback hits while allowing nearly 28 points per game. Lions defensive coordinator Teryl Austin had his unit getting pressure on just 19.4 percent of dropbacks, the fourth-worst rate in football.

Those numbers dramatically improved in Week 4. The Lions pressured Russell Wilson on 48.6 percent of his dropbacks, the fifth-highest rate by any team in a game this season. Ziggy Ansah, who appeared unblockable at times, picked up two sacks to take his season total to four sacks and seven quarterback hits. The only players who have matched or exceeded Ansah in both categories are DeMarcus Ware and J.J. Watt. That’s a pretty impressive neighborhood in which to reside.

Of course, while the Lions did play better up front and got more pressure than normal, much of that has to do with the Seahawks offensive line being an absolute disaster this season. About the nicest thing you can say about the unit, stripped of Max Unger and James Carpenter this offseason, is that there is never a wait for a turnstile. They were unable to create anything in the way of running lanes for undrafted rookie Thomas Rawls, who served as the primary running back with Marshawn Lynch out and Fred Jackson injured during the game. Rawls gained just 48 yards on 17 carries, including an eight-carry, 9-yard first half.

Instead, the Seahawks were bailed out on offense by their stars. Their running game this year — and truthfully, more than they might care to admit in years past — has been built around Lynch’s rare ability to beat defenders up one-on-one, either bullying them aside or dragging them for extra yardage. And their passing game works because Wilson makes magic happen on seemingly every snap, bailing out the line by making free rushers miss before finding an open receiver for a big gain.

That’s what happened on Seattle’s first-half touchdown drive, which saw Wilson spin away from a free Jason Jones coming up the A-gap before running past Ansah, looking upfield, and delivering a pass to Jermaine Kearse for 34 yards as Wilson took an enormous hit from a third Lions defender. On the very next play, with a rare bit of time to throw in the pocket, Wilson fired a perfect strike up the seam to Doug Baldwin for a 24-yard touchdown.

It was the offense’s only sign of life for most of the day, and when the Seahawks needed a first down to finish the game, they just had Wilson take a shotgun snap and outrun an unblocked Josh Bynes off the edge before firing a 50-yard pass to Kearse. Detroit’s only touchdown came on one of Wilson’s two fourth-quarter strip-sacks, but the degree of difficulty for what he’s being asked to do in this wildly limited and dysfunctional Seattle offense is enormous. It’s one of the silliest perennial offseason arguments that Wilson is a system quarterback who wins because he plays with Lynch and a great defense. On many nights, Wilson is the system.

Seattle is becoming a team that wins only if its transcendent star players outperform the system, and that’s what got the Seahawks over the finish line Monday. It was Wilson on offense, and when a dominant defensive display finally threatened to collapse and allow the Lions to sneak ahead, it was Chancellor’s remarkable forced fumble that saved things. You can understand why John Schneider didn’t want to set a precedent by giving Chancellor a new extension, and it’s too simplistic to link the dramatic improvement in their defense over the past two weeks solely to Chancellor’s return, but they got a special play from a special player when they absolutely needed one.

The Seahawks aren’t the deep, versatile unit they were before their myriad superstars moved from rookie contracts to market-value extensions. They’re a top-heavy team with a ton of undrafted free agents on the roster, a team that needs its stars to be on the field and to play well. If Chancellor chooses to hold out again this offseason (or as I semi-jokingly suggested Friday before this all happened, this week), the Seahawks really won’t be able to afford to leave him on the sideline. Seattle certainly has a few superstars, and with the 12s, it has the best home-field advantage in football. The Seahawks just can’t count on a 13th man in black-and-white stripes helping them out on a weekly basis, too.