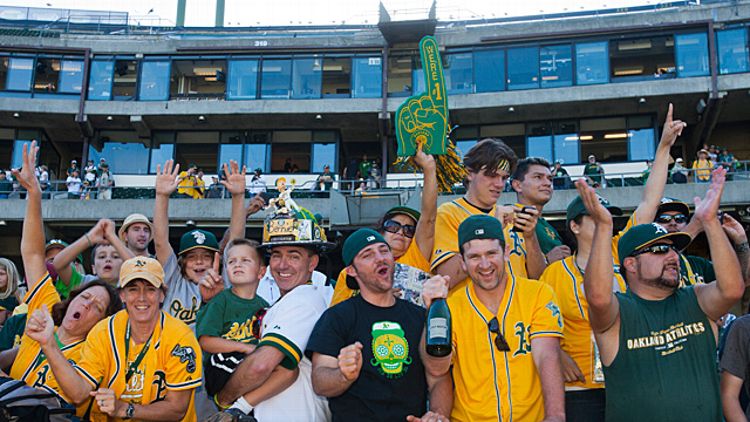 While the majority of the Bay Area stock chatter is about Twitter, there was an initial offering last week that was equally intriguing: Oakland Athletics tickets. Yes, tickets. Tickets to any event, especially postseason events, are essentially an IPO, with the price set by the team and the market bidding prices up or down based on demand. The buyers are fans rather than shareholders, and instead of a financial return, their primary investment objective is emotional return. The A’s one-run, walk-off win on Sunday night delivered in a big way for the 48,292 in attendance. It also created a very real financial return for the team. While franchises always reap meaningful revenue from postseason appearances, the A’s are maximizing their upside this year through the use of dynamic pricing.

When it comes to modern personnel management, the A’s wrote the book. Their book was so effective that a real book was written about it. As fans know, that book was Moneyball, the 2003 bible on value investing in the world of baseball. In the book, Billy Beane is the messiah and 10 years later, after famously turning down the Red Sox GM job, he is still plying his trade in Oakland. Rather than being just another employee, though, he now owns 4 percent of the team, which means that he is directly benefiting from its adept use of dynamic pricing, or moving ticket prices up or down in real time based on market demand, with the goal of maximizing either revenue or sell-through rates.

Game 5 of the ALDS comes to Oakland tomorrow night, which means that the A’s are assured of at least one more sellout crowd at O.co Coliseum this season. That’s quite a contrast from their regular-season attendance profile. During the regular season, the A’s drew near the bottom of the league, averaging only 22,000 fans per game. For their two ALDS playoff games, however, they have averaged more than 48,000 fans, or 137 percent of their stadium’s capacity. If one didn’t know better, you’d assume that people were sitting in each other’s laps. In reality, they’re sitting in 15,000 upper-level seats that had been covered during the regular season, and thus not counted in their capacity number. Even with those seats covered, though, A’s tickets this season were the definition of a buyers’ market. You could go to almost any game for under $10. The playoffs, however, are a different story.

For teams like the A’s that have a relatively small season-ticket-holder base, there are very few pricing restrictions when it comes to the postseason. Teams like the Cardinals, which have a much larger season-ticket-holder base, can use dynamic pricing only for pinpoint optimization of smaller blocks of inventory. The A’s are using it for the majority of inventory, and don’t have to worry about angering season-ticket holders when they raise or lower prices; they simply didn’t have that many to begin with. That means that performance on the field can directly and immediately affect revenue.

The secondary-market average for the deciding Game 5 is currently $144. This compares to a $55 regular-season average price. While prices for the game have dropped 27 percent in the past four days, the A’s remain the best deal on the market. Some of those uncovered upper-level seats can still be had directly from the A’s for $45. That’s up from $38 yesterday, but still about $25 less than anything available on the secondary market.

If there’s a dramatic walk-off home run in Game 5, ALCS prices could rise, but it’s likely that the A’s would still have the best deals in the market. For consumers who have been conditioned to believe that secondary is the only way to buy tickets, that reality may take some getting used to. It will also require that teams reach prospective buyers when they’re “in-market” with an offer they can act on. The Internet and all its fan data create ample opportunity to do just that. The current average price on the secondary market for the ALCS is $274, or a 500 percent premium to the A’s regular-season average. The average price for what would be their first World Series tickets since 1990 is $900, or 1,800 percent above their season average. If they make it that far, the numbers will likely get big enough that dynamic pricing could write another chapter in the Bay Area underdog’s playbook on how to disrupt the baseball business model and stay competitive against all odds.