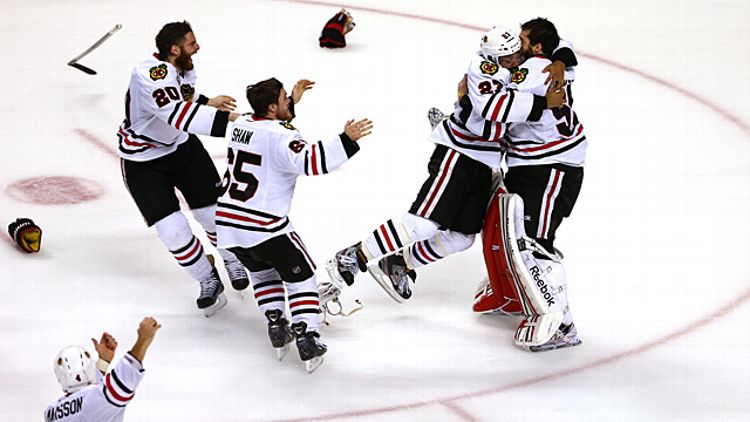 You see, Chicago, this is not the way it’s supposed to work.

Not in the salary-cap era, at least. We lost an entire season to get this system, and then we lost another half-season to … well, nobody’s quite sure, but to tweak it, we guess. This is supposed to be the age of parity in the NHL, and that means everybody needs to play by the rules.

Here’s how it’s supposed to go: You lose. You draft high and pray you find a superstar or two. You try to find a few more stars on the trade market or in free agency. That’s your core, and you build up a supporting cast around it as cheaply as possible.

And then the window opens, maybe for a year or two, maybe longer if you’re lucky. That’s your chance to win the Stanley Cup. At that point, all you can do is cross your fingers and hope.

And then — and this is the important part — the window slams shut. Those discounted entry-level contracts end, the secondary stars want their chance to be the main guys, and that cheap supporting cast gets their chance to cash in elsewhere. You pick your two or three franchise players, throw all the money you can at them, and everyone else leaves.

And then it ends. If you keep the right guys and make a few smart decisions here and there then you can delay the inevitable for a while, but eventually it’s over. Someone else’s window opens. You fall back to the pack. Maybe you fall even further. And then you start all over again.

This is how it’s supposed to work. And how it did work, for the first few seasons of the cap era. Seven years, seven different champions, 12 different finalists. You could make a return trip in back-to-back years (the Pens and Wings both did), but once you were gone, you stayed gone.

The Chicago Blackhawks followed the first half of the process to the letter. But then they forgot to stay gone.

It started off so perfectly, with the 2010 Blackhawks serving as the prototype for building an NHL champion in the post-lockout era. Two seasons of hopelessness and some lottery-ball luck led to a pair of top-three picks, which turned into Jonathan Toews and Patrick Kane. They took their time with Duncan Keith and saw him turn into a superstar. They developed Brent Seabrook and stole Patrick Sharp and bought Marian Hossa. That was the core.

They won the Stanley Cup in 2010, ending a 49-year franchise drought. The city went crazy.

And then came the offseason, and it all fell apart, just like it’s supposed to. They traded half the team to the Thrashers. Kris Versteeg was sent packing to Toronto. They couldn’t afford Antti Niemi, the goalie who’d just won them the Cup, so they released him. Didn’t even trade him — they just let him walk for nothing, and handed the job over to some kid with eight career games played.

The core stayed intact, but the rest of the roster was in shambles. In 2011, the Blackhawks lost in the first round. In 2012, they did it again. By the end of last year, there was talk that coach Joel Quenneville was on the verge of losing his job. The process worked. Thank you, Chicago, we hope you enjoyed your moment. Now please step back into the line and let someone else have a turn.

But that didn’t happen, and now we have to figure out how the Blackhawks were able to glitch the system.

For starters, they managed to keep that core — and their core was really, really good. And it may not be going anywhere soon. Toews, Kane, Seabrook, Keith, Hossa, and Sharp are all signed through at least 2015, and each one comes with a lower cap hit than Paul Stastny.

As for that supporting cast that was so thoroughly decimated during the Great Purge of 2010, they were replaced by what may have been an even better version. They found yet another mix of talented youth, drafting Brandon Saad, pilfering Nick Leddy, and smuggling Andrew Shaw out of whatever cyborg pest factory they found him in. They brought in a new mix of veterans and role players, like Michal Handzus and Michael Frolik and Johnny Oduya. The few remaining depth guys from 2010, like Dave Bolland and Bryan Bickell, played key roles.

And of course, they did it with Corey Crawford, that unproven kid who took the reins when Chicago cut Niemi loose. For all the conventional wisdom about how you can’t win without an elite goaltender, the Blackhawks sure seem to do just fine without one. (Or are we going to decide that Crawford was elite after all? We may have to file that one under “a narrative to be named later.”) At the very least, Chicago keeps reminding the rest of the hockey world that spending big money on goaltenders doesn’t seem to work anymore.

And so three years after winning and then imploding, the Blackhawks were right back in the Stanley Cup final, despite a system built to keep them out. And what’s worse, they found themselves facing an opponent who also forgot to stay gone. In fact, Boston may have screwed up the process even more than Chicago did, since the Bruins didn’t even have the good grace to tank for a few years first.

And maybe that’s the lesson we can take away from a shortened season that led into one of the greatest postseasons of all time. Maybe it can be done. Maybe the evolving reality of the salary-cap world is that it really is possible that a team that’s smart and resourceful and, yes, lucky can break the cycle of tank-build-win-tank.

And maybe that means we’ll get more finals like Bruins-Blackhawks, a series that was short on novelty factor but long on just about everything else. It was a showdown between a pair of proud champions, or at least the remnants of them, slugging it out to get back what they’d lost. And when it was all over, it was hard not to start thinking down the road to a rematch.

If that means that the league’s also-rans have to linger in line, waiting for a turn at an open window that may never come, so be it.

The 2013 final wasn’t supposed to be this way, but it was, and it was fantastic.

Our Lady of Perpetual Parity weeps. But the rest of us shouldn’t.