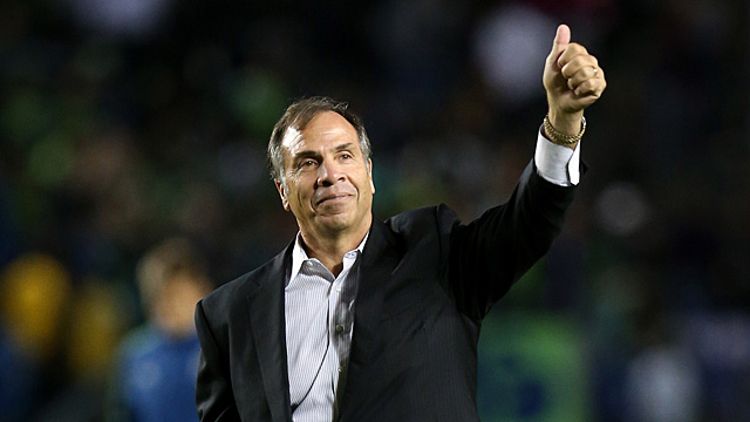 Sunday night, the L.A. Galaxy gathered in the cold rain on a stage on Century Link Field, amid a chorus of boos from the remaining Seattle Sounders fans, waiting to receive the trophy as the MLS Western Conference champions. They had just beaten the Sounders 4-2 in aggregate goals in a two-game series and earned a spot in the MLS Cup, where they will be playing to defend their 2011 championship. The team’s captain for the night, Robbie Keane, waited atop the podium to receive the trophy from MLS executive vice president of competition Nelson Rodriguez. Beside Keane was the team’s usual captain, Landon Donovan, who missed the game with a hamstring injury. Next to Donovan stood the man who built this Galaxy team, the club’s general manager and head coach, the most successful coach in American soccer: Bruce Arena.

“He’s revised this franchise,” Donovan said of Arena. “In ’08 we were pretty miserable. Not only the team but the club in general was in a really bad spot.”

It was August 2008, and the L.A. Galaxy were 6-8-5 and hadn’t won a game in two months. Worse off, they were going through that slump even with David Beckham in their lineup. The season before, the Galaxy’s ownership group, AEG, led by CEO Tim Leiweke, had twisted Major League Soccer’s arm into letting them sign the then-32-year-old Beckham from Real Madrid to a five-year contract, paying him $6.5 million per year.

In Beckham’s first season with the team, the Galaxy failed to make the playoffs. Now they’re struggling to win a game. The club was in turmoil. There was tension between Donovan and Beckham and the club’s general manager, Alexi Lalas, was butting heads with the team’s new manager, Ruud Gullit.

So Leiweke fired Lalas and forced Gullit to resign. Then he gave Arena the keys to the franchise.

“He’s a builder,” said Dave Sarachan, the current associate head coach of the Galaxy and Arena’s lieutenant for the past 20 years. “He loves to take on a project that needs construction.”

What Arena has built over his 35-year coaching career is a dynasty at every level of American soccer. First it was the University of Virginia, where he led the school to five NCAA championships, including four in a row from 1991 to 1994. Then it was D.C. United, where he became the team’s head coach in MLS’s first season, 1996. Under Arena, D.C. reached three MLS Cups in a row, winning the inaugural trophy in 1996, repeating in 1997, and coming finishing as runners-up in 1998, the same season they won the CONCACAF Champions Cup as the best club in the region.

Arena is probably best known for his run as manager of the USMNT. When he took over the team, in October 1998, they had finished dead last in the field of 32 teams at that year’s World Cup. Four years later, at the World Cup in Japan and South Korea, he coached a team of veterans and prodigies to the quarterfinals, where they lost, 1-0, to eventual runners-up Germany in a match which nearly every U.S. soccer fan will to this day tell you they should have won. Either way, it was the United States’ best finish in the tournament since 1930.

To this list of accomplishments Arena can now add reviving one of Major League Soccer’s marquee franchises. Along with winning the 2011 MLS Cup, Arena led the L.A. Galaxy to the 2009 MLS Cup final, where they lost on penalty kicks to Real Salt Lake; the 2010 Western Conference finals; and the Supporters’ Shield — the trophy given to the MLS team with the best regular-season record — in 2010 and 2011.

Everyone involved with the Galaxy — coaches and players alike — credit Arena’s success to his uncanny ability to manage players.

“Bruce’s man management is very good. He’s very good with the players. He’s strict when he needs to be, and then he’s good at putting an arm around a player that needs it,” said Beckham. According to Arena, motivating players is as important as setting them up, tactically. “Everybody knows how to draw up a play, how to run a practice. That’s the easiest thing you could possibly do. The biggest key is get to know [the players], and get them to know you. Try to create an honest working relationship. If you can develop a good working relationship, then you can deal with the highs and lows that come your way.”

One of those lows came this season in May. The Galaxy were 3-9-3, hanging around the bottom of the conference. Then the team had a two-week break.

“During that break,” said Donovan, “I think he went player to player and let people know what the expectations were. Bruce and I had lunch, and I think for the first time I realized the urgency. He made it very clear that the team was gonna go as a few of us went. If we could change it around, the whole team could.”

The team did turn it around. After that break, the Galaxy went 13-3-3, and since July most people familiar with MLS feel they have been the league’s best team. They entered the playoffs as the 4-seed in the Western Conference, came from behind to beat Vancouver in the opening round, and have since dispatched San Jose and Seattle.

Arena has created a team that serves as the model MLS club: a blend of high-profile international players, proven veterans, and talented youngsters. The criticism of the Galaxy is that they have been able to build this talented side because they have more money to spend than other clubs. This is partially true. The MLS salary cap is only $2.81 million for a team’s top 20 players. Beckham’s salary alone is $3.9 million. But MLS has made the roster rules somewhat vague, and there are a number of stipulations that clubs can massage to their advantage. The most important is the Designated Player rule, which the league states “allows clubs to acquire up to three players whose salaries exceed their budget charges, with the club bearing financial responsibility for the amount of compensation above each player’s budget charge” ($350,000). Because of the financial backing of AEG — which also owns the L.A. Kings and an interest in the Lakers — the Galaxy have been able to pay the portion of the salaries of their Designated Players — Beckham, Donovan, and Keane — that exceed the $350,000 amount charged to their roster.

Still, even three elite Designated Players are not enough to win a championship.

“He knows how to build a squad,” said Keane. “He knows what players are suited for this team. He’s obviously got a wealth of experience in the U.S., so he knows every player.”

This 2012 roster is the result of more than three years of roster tinkering. Before the 2009 season, Arena brought in midfielder Mike Magee from the New York Red Bulls and Todd Dunivant, a veteran left back — often a difficult position to fill at any level of soccer — from Toronto. He drafted defenders Omar Gonzalez (who went on to become the 2011 MLS Defender of the Year) and A.J. DeLaGarza out of Maryland. In 2010, he signed 21-year-old Brazilian midfielder Juninho on loan from Brazilian club Sao Paulo. Before this season he brought in Marcelo Sarvas, another Brazilian midfielder, and in September the club signed Swedish international right winter Christian Wilhelmsson.

This Galaxy team also features another element that’s been a hallmark of Arena’s teams: talented young players. Throughout his career, Arena has developed many of the United States’ elite players from a young age. The most famous is Donovan, who was 20 years old when Arena included him in the starting lineup at the 2002 World Cup.

On the Galaxy, two players have made the move from Development Academy team to senior side: Jack McBean and Jose Villarreal. Tommy Meyer, a rookie center back from Indiana University who played only eight regular-season games, has stepped in for an injured DeLaGarza and played every game of the playoffs, stifling San Jose’s Chris Wondolowski and Seattle’s Fredy Montero in the process.

For Los Angeles, their next goal is repeating as MLS Cup champions. On December 1, they’ll host the Houston Dynamo at the Home Depot Center in a rematch of the 2011 Cup. On Monday, the Galaxy announced that the match will be David Beckham’s last with the team. He will not play out the second year of what was supposed to be a two-year contract. In the days before the game, that news will shift the narrative going into the game to Beckham’s legacy in Los Angeles and his motives for signing with the club in the first place. But the news doesn’t change the Galaxy’s record under Arena over the past four seasons. Love him or hate him, Arena’s achievements with Galaxy over the past four seasons prove one undeniable fact: When it comes to building winning soccer programs, no American is better than him.