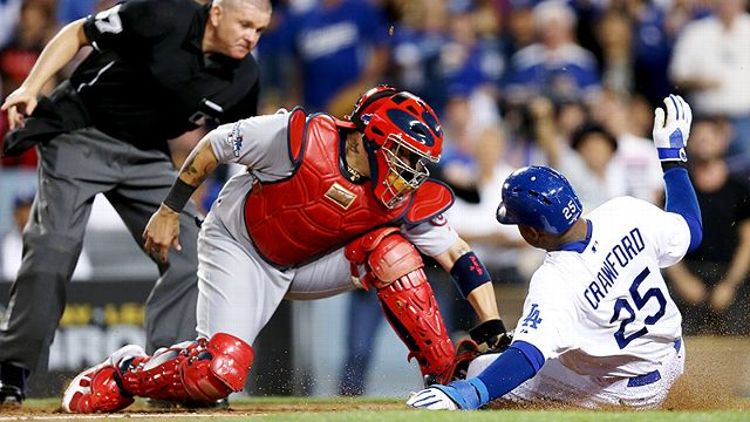 Every now and then, we will attempt to write the worst sports column on Earth. Today: Let’s talk about the MLB playoffs and the future of America’s pastime.

CHAVEZ RAVINE, CALIFORNIA — The Dodgers, the Cardinals, and a battle for baseball’s soul. That’s what we have in the National League Championship Series this year.

The Dodgers are a talented and exciting young team, and they’ve impressed me at times, but the way they play the game just rubs everyone the wrong way. So sure, the stakes are high in any playoff series, but sometimes it all means a little something more. Sometimes the biggest games of the season can change the direction of the whole sport.

It’s the oldest struggle in the world — one side wants to buy success, one side thinks you need to earn it. And it’s all writ large on that old American canvas, the baseball diamond.

It’s not a sports columnist’s job to tell you who to cheer for; I’m just here to present facts and let you decide. The Dodgers have been acting like a bunch of maniacs all year long, and that’s fact.

Last night was no exception.

In Game 3 of the NLCS, Yasiel Puig stepped to the plate with the whole stadium cheering. He smacked a ball to deep right field and then stood frozen at the plate, and for a few seconds you could actually see him buying into his own hype. But lo and behold, the baseball gods kept it in the park, and Puig had to run the bases.

He turned it into a triple, but not before embarrassing himself.

Cardinals veteran Carlos Beltran spoke for the rest of baseball last night when he was asked about Puig’s antics and dared to be honest.

“As a player, I just think he doesn’t know [how to act],” Beltran said. “That’s what I think. He really doesn’t know. He must think that he’s still playing somewhere else. … I mean, it’s not great. To me, I don’t like it. But what can I say? I don’t play for them. I just play over here. I just need to do my job. It is what it is.”

Beltran is right: It is what it is.

But it sure isn’t baseball.

The Dodgers have been doing Mickey Mouse stuff all year long. They admit it, too. As Gonzalez explained his behavior, “I did what I always do, but we are in L.A., so Mickey Mouse is only an hour away.”

I know there’s no cheering in the press box. But can we make an exception for booing?

Remember: It was just a few short weeks ago the Dodgers made fools of themselves parading through Arizona’s swimming pool to celebrate their playoff berth.

It made everyone look bad.

It was lewd. It was crude.

It was everything the Los Angeles Dodgers have stood for all year long. Back in August, Puig was asked to speak to the media and said, “[Expletive] the media” and told all of us journos to perform a sexual act. This is the postseason “hero”?

This team may have the most expensive roster in the league and all kinds of money to spare, but it can’t buy baseball’s respect. It can’t buy my silence, either.

Especially not with the Cardinals standing in that other dugout. If the Dodgers are the disease in pro sports, the Cards and their fans are the cure. St. Louis is a city that lifts its team every October, and together they hit greater heights than anyone thought possible. “This is why I signed back here,” Adam “Ace” Wainwright explained last week. “There’s no amount of money worth what this city and this team means to me. I’m honored, I’m privileged, I don’t deserve any of this.”

That’s how this entire Cardinals team operates. While hotshots like Puig live in the fast lane, the Cardinals are the type of guys who bike to work.

Together, as a team, all just spokes in the wheel.

Sometimes in this world we say the games we watch are bigger than sports. But for now, for today, it’s just about baseball.

Because this game was built on the crack of the bat, the smell of the grass, the poetry of the local nine charging out of the dugout to raucous cheers. The simple stuff that takes us all to a better place for a few hours. That’s baseball.

Teams like the Cardinals are what this silly game is all about. Guys like Ace Wainwright and David Freese and Carlos Beltran. Guys who celebrate and have fun, but do it the right way. Less Mickey Mouse, more Mickey Mantle.

Hip, but not hip-hop. That’s baseball.

You can try to take something pure and corrupt it with TV and money and fame — the Dodgers are trying harder than anyone — but you’ll always have guys like the Cardinals willing to fight for the rest of us. And that’s what is at stake the next few days.

Remember what you’re watching this week.

I’m just presenting facts today; it’s not my job to tell you who to root for. Just like it’s not my job to tell Vin Scully to boycott this team. But when you think about it, you have to sympathize with any man who knows the game as well as Vinny does. He has had to watch this Dodgers disgrace all year long. You have to wonder when he’ll just snap and start getting honest with everyone. Tell us how he really feels.