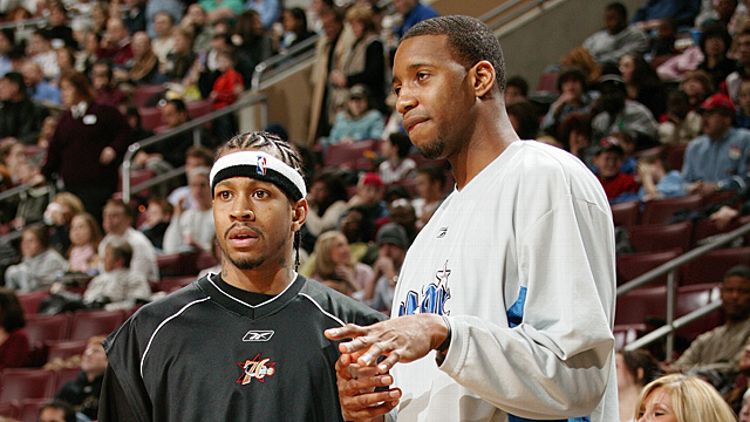 Every now and then, we will attempt to write the worst sports column on earth. Today: Let’s talk about Allen Iverson, Tracy McGrady, and true greatness.

SPRINGFIELD, MASSACHUSETTS — Allen Iverson and Tracy McGrady were two very exciting basketball players for a few years there. They impressed me. But now that all is said and done — they both announced their retirement in the past week — it’s time to look at the bottom line. When you add it all up? They both had very, very good careers. They should be proud of what they accomplished.

But they weren’t Great.

I’ve seen way too many blog sites this week calling them legends, romanticizing their prime, and telling us how grateful we should all be that they graced us with their presence. Everyone is an expert these days, and all the conventional wisdom out there says these guys belong in the Hall of Fame. Well, not me.

Call me old-fashioned, but I say Springfield — like Canton, like Cooperstown — is a retirement home for our best and brightest. Where Stockton and Malone run that pick-and-roll forever, surrounded by the Bad Boy Pistons, the Showtime Lakers, Wes Unseld. All of them. Strolling through the double doors in Springfield, you’re blinded by greatness almost as soon as you walk in.

That’s the way it’s supposed to be.

But Monday afternoon, all I could see were tweets from all these Internet tough guys telling me that McGrady was underappreciated and Iverson was guaranteed a spot in Springfield. I couldn’t help but wince. This isn’t Little League, people.

Not everyone gets a trophy.

As I’ve always said, the enemy of “great” is “good enough.” When we start awarding guys immortality just because they were pretty good, suddenly the entire Hall means a little less. The bright lights get a little dimmer.

McGrady and Iverson in the Hall? No thanks. I’m not buying it. Just look at the facts.

FACT: McGrady didn’t bring a team out of the first round of the playofs until he was a throw-in with the San Antonio Spurs this year. Even when he went to China, his team still finished last in the league. In China.

FACT: Iverson accomplished a lot with subpar teammates, but he also spent his entire career chasing off any talent the Sixers surrounded him with. There’s a reason he got stuck with Eric Snow.

FACT: McGrady was a second-fiddle superstar to guys like Vince Carter and Kobe Bryant his entire career. When his game started to slip and he faded to the background? The band played on just fine.

FACT: Iverson was a nasty example for my son and millions of other young dreamers out there. Shouldn’t that count when we add up the stats? It’s the Hall of Fame, not the Hall of Infamy.

FACT: Put Iverson against Kobe Bryant, Reggie Miller, or any of the other shining stars we’ve seen the past 20 years, and it’s like his draft-day physical all over again: A.I. comes up a little short.

FACT: Zero titles between the both of them. A big fat doughnut for the experts to chew on.

Don’t get me wrong, it’s a shame. McGrady could’ve been great. Iverson, too. There’s no denying their potential. But at some point, don’t we all have to admit they never quite lived up to it? The writing’s on the wall, I’m just reading it.

When push came to shove, these cats couldn’t hang with the big dogs.

Iverson and McGrady played the game hard, and eventually it caught up to them. McGrady’s body betrayed him, and after spending an entire career snapping back against authority, nobody was willing to trust Iverson on an NBA court after about 2007. Them’s the breaks, pal. In a culture of accountability, your decisions have consequences. 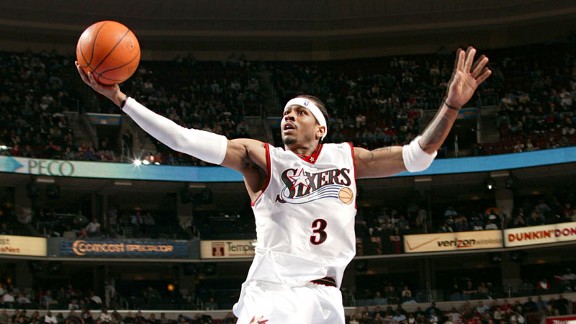 If your name is Allen Iverson, maybe some folks are willing to forget that you were always a bad apple. They’d rather hand out orange slices instead, and throw in a participation trophy. Have a big ol’ party for the little guy.

And hey, don’t stop at Iverson! Put Penny Hardaway in the Hall because he had a few good years in Orlando. Put Yao Ming in the Hall of Fame because he was tall and sold a lot of jerseys in China. Throw in Grant Hill, too. Remember those Sprite commercials? Who could forget! Or Desmond Mason and Nate Robinson. Those guys won dunk contests. How will we remember them if they’re not in the Hall of Fame? As long as making a highlight reel makes someone a Hall of Famer, let’s call up the And1 Mixtape crew and get them all fitted for their bronze busts.

Why am I the only one having a meltdown here?

Listen, McGrady had bad luck, Iverson had a bad attitude, and they both got burned. That’s the way it goes. We don’t need to airbrush the past just to make everyone feel better about themselves.

What kind of message does it send if you put a character like Allen Iverson in the Hall?

I know lowering the bar has become par for the course in today’s society. Everyone gets a mulligan as long as they’re famous and trying hard. It’s why we’re bogeying the present and leaving divots for the future. That scorecard was signed a long time ago. (Just look at the difference between Billy Ray Cyrus and his sexpot daughter. This is who we are now.)

All that’s well and good, I suppose. But the Hall of Fame is about Great.

The Hall is where we celebrate the stars that last forever. 1000 Hall of Fame Ave, Springfield, MA. That’s where we can walk in, look up at the wall, and let these guys be our guiding light. Our North Stars.

Those guys are fixtures in a constellation of true greatness.

When we start worshiping shooting stars like Tracy McGrady and Allen Iverson … Aren’t we just looking up to a couple of burnouts?