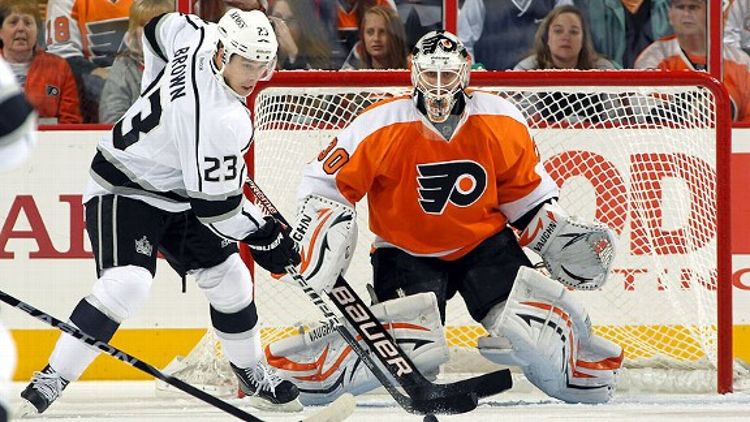 Hockey’s Three Stars of Comedy is a monthly feature that will recognize the three NHL personalities from around the league who produced the most comedic fodder for fans. It will appear every month until the Leafs fall out of playoff contention and the author finds himself drinking heavily in his backyard while screaming “I can’t believe I fell for this again!” at the moon.

Let’s just get this out of the way: When it comes to comedy, Ilya Bryzgalov is just operating at a different level than everyone else right now.

He’s already claimed one monthly first star this season, and based on his performance in the debut episode of HBO’s 24/7: Flyers/Rangers series, he should easily cruise to a second. In fact, there’s a good chance he’ll sweep the rest of the season and, in the process, ruin the three stars concept the way Wayne Gretzky ruined office hockey pools in the mid-’80s.

So I’m going to take the unprecedented and possibly unethical step of retiring his number right now.  You win, Ilya. Nobody can compete with you. When it comes to hockey comedy, the gap between you and everyone else is just too humongous big to overcome. So please step aside and let the rest of the league have a chance.

Tomas Kaberle, Montreal Canadiens
Kaberle makes the list for two reasons. First of all, he was somehow unloaded by the Carolina Hurricanes into the willing arms of the Montreal Canadiens, who apparently enjoy collecting awful contracts from around the league.

Days after that trade, the Canadiens fired coach Jacques Martin and hired Randy Cunneyworth as an interim replacement. That’s not directly related to Kaberle, but it did bring the total of coaches he has played for in 2011 to six. Six! The Sabres and Red Wings have each had as many coaches in 25 years as Tomas Kaberle has had since February.

And he still has a few days to go. Be careful, Randy! Don’t look directly into the disturbingly rosy cheeks of doom!

Appearing on a Chicago radio station, Blackhawks center Dave Bolland decided to go stand-up on the Vancouver Canucks, and, more specifically, on Henrik and Daniel Sedin. And he certainly brought his A-material, referring to the Sedins as “sisters.”

Get it? Because if they were sisters that means they’d be girls! And that would be insulting, because girls are dumb and stuff and we should all laugh at them.

OK, so Bolland’s “Sedin sisters” line wasn’t actually funny. And neither was his reference to bunk beds, or his claim that the Blackhawks wouldn’t even want the Sedins (who’ve only combined to win the last two scoring titles) on their roster.

Also not funny: the comeback from Canucks coach Alain Vigneault. He accused Bolland of being “an individual whose IQ is probably the size of a bird seed,” and said he had a “face that only a mother could look at.” Yeah, neither of those statements even make sense.

So why do Bolland and Vigneault earn a spot on this list? Because their act was so painfully unfunny, it made everything else that happened in the hockey world funny by comparison. Spend a few minutes listening to the clips, and suddenly a linesman waving off a delayed icing seems like vintage Carlin.

So thank you, Dave and Alain. You’ve managed to set the bar so low that the rest of the month felt like a comedy gold mine. Now never try to be funny again.

Remember back in 1993, when Teemu Selanne scored that record-breaking goal, threw his glove up to the rafters, and pretended to shoot it out of the air with his hockey stick? That was cool.

You know what else was cool in 1993? Slap bracelets and playing Mortal Kombat in an arcade. But those things aren’t cool anymore. And neither is pretending that your hockey stick is a firearm, as Anisimov found out against the Lightning.

What makes the moment especially memorable is Anisimov’s reaction. He genuinely seems to think that what he’s doing is funny, right up until he realizes nobody is laughing and several people are, in fact, making their way over to punch him upside the head. Then he’s confused. Then he panics. Then he tries to leave as quickly as possible. Then he gets punched upside the head.

In other words, he has the exact same reaction as somebody telling a politically incorrect joke, only to realize that the group he’s telling it to includes several members of the segment of the population that he’s offending. The only thing missing was Anisimov frantically protesting “No no, it’s OK, I have a Tampa Bay Lightning friend!”

I don’t mean as a general manager. (For Leaf fans, the jury’s still out.) I don’t even mean as a nice guy. (He’s notoriously cranky with the Toronto media, even mocking them on Twitter.) I mean as a larger-than-life character, one willing to actually speak his mind in the say-nothing-at-all-costs hockey culture, he’s unmatched. And if you don’t like what he has to say, as Kevin Lowe now knows, he apparently won’t rule out fighting you.

The hockey world already knew that Burke and then Oilers general manager Lowe had issues back in 2007, stemming from a dispute over restricted free agent Dustin Penner. The feud was notable, not just because it was the last known moment in history when multiple general managers actually wanted to employ Penner, but because of the sheer vitriol the two men spewed at each other.

But what we didn’t know, until this month, was that Brian Burke tried to rent a barn so that he could fight Lowe.

You read that last sentence correctly. As revealed in a fascinating interview with a Canadian sports network, Burke apparently offered to rent a barn in Lake Placid so he and Lowe could have a fistfight. Literally. The plan was only abandoned when commissioner Gary Bettman found out and threatened them with indefinite suspensions, no doubt in the same tone of voice as an exasperated parent threatening to turn the car around and go home.

This revelation naturally led hockey fans to ask some important questions, including: How exactly do you rent a barn? Are there actually barn rental services out there? (Apparently, yes.) Are any of those barn rental services located in Lake Placid? (Sadly, no.) Does a barn rental contract have a standard clause prohibiting hastily arranged bare-knuckle grudge matches between millionaire sports executives? (Undetermined.)

And if they had found a suitable barn, who would have won the fight? Lowe had an underrated tough streak as a player, and presumably would have been able to handle the older and more, uh, well-rounded Burke. Then again, if the fight were held today, the outcome could be different, since Burke’s endless army of Maple Leaf assistant GMs could swarm the ring at the first sign of trouble and overpower Lowe like the 1997-era NWO.

We’ll probably never know, since Burke and Lowe have since assured the media that they’ve buried the hatchet. That’s probably a metaphor, though we can’t rule out the possibility that one of them actually has a hatchet buried somewhere, under some loose hay, in the corner of a rented barn. Just in case.