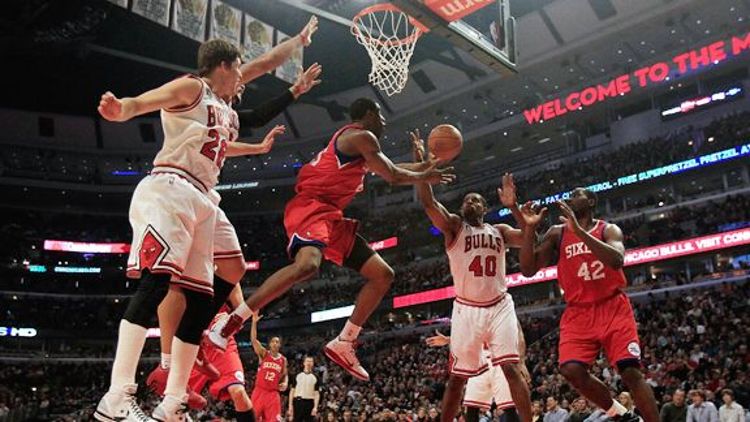 As part of our coverage of the NBA lockout, Grantland’s Jonathan Abrams checked in with Thaddeus Young, a restricted free agent for the Philadelphia 76ers. Young talked about the possibility of playing in China during the lockout, what Philadelphia needs to break through and  the one skill he would steal from another NBA player.

Grantland: Your agent recently talked about the prospects of you playing in China during the lockout. How did those discussions come about?

Young: “It was a good idea just in case we didn’t have a season, so I wouldn’t just be sitting out not playing for a whole year. It’s just to entertain and explore some options. The opportunity is always open and there are other avenues of playing basketball and China was one.”

Grantland: Is there anything definitive with going to China yet?

Young: “Right now, we haven’t discussed it that far. We are just keeping our eyes and ears open and hoping we get the lockout over sooner than later. I wouldn’t mind going overseas and I’d love to explore China and get a feel for how the overseas game is in China and other places also. But I would definitely love to play over here too. My family is over here and I’m much more familiar with playing in the U.S.”

Grantland: So where are you at in terms of negotiating with teams in the Chinese Basketball Association?

Young: “Right now, there’s been offers placed on the table and there’s been counter offers and stuff like that. But as of right now, I’m just sitting and waiting. … Right now, I think it’s more of an entertaining-the-opportunity type (of) thing. But if it comes to that point, then I’ll definitely make the move and come over.”

Grantland: What would it take for you to say yes?

Grantland: The Chinese Basketball Association is refusing to allow its teams to sign players who are under contract with NBA teams. You are a restricted free agent in the NBA and if you sign in China, will miss the NBA season if it is salvaged. How much does that weigh on you and your decision?

Young: “I think about it all the time. That can’t do anything but set on your mind and it factors in on what’s going to happen. Me and my people, as a team, we’re going to set down and talk about it and have several conversations about it. We’re definitely not leaving anything out and putting all the facts on the table.”

Grantland: Philadelphia has been on the cusp of breaking through for a while. What will tip it in the 76ers’ favor?

Young: “I’d probably say we would need a dominant center. We have good bigs, but if we can get a dominant center who can control the paint and go on the other end and do the scoring and rebounding and getting us extra possessions, we’ll be great and have a better low-post game. Wing, forward and guard-wise, we’re straight. We just need that one dominant center.”

Grantland: If you could steal one skill from one NBA player, what would it be?

Young: “I would probably have to say I would steal the Euro step from D-Wade. I don’t know how he does it, but he always manages to get around the defenders when he does the Euro step. He can go either way and he actually comes off the Euro step dunking on people sometimes.”