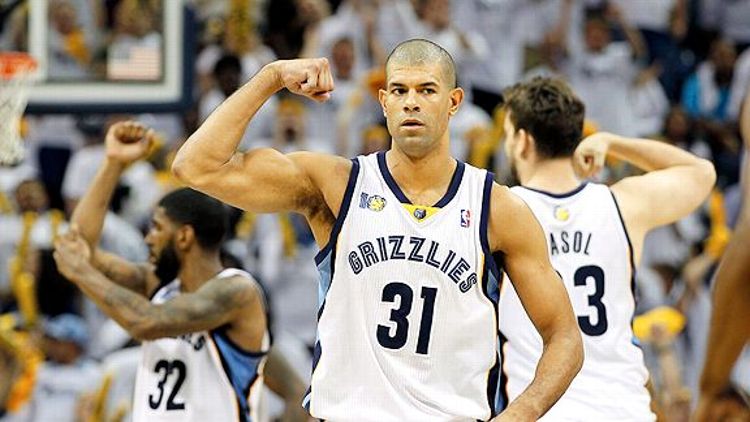 As part of our coverage of the NBA lockout, Grantland’s Jonathan Abrams checked in with Shane Battier to see how he is spending his newfound free time. Battier discussed being a free agent, how he would solve the lockout, and the toughest player to draw a charge on.

Grantland: Earlier in the offseason, you said that if you played anywhere overseas, it would be in China. Are you surprised that Wilson Chandler signed to play there without the ability to come back should the NBA return sometime in 2011-12?

Battier: “Not entirely. Wilson’s a young guy still. He’s got many more years left to play in the NBA. It’s a much different situation for a guy like me who’s nearing the end. I think Wilson can make up any perceived loss of income he’ll miss out on this one year. I applaud him. It’s a heck of a jump and it’s going to be a great lifetime experience for him and a great basketball experience for him. I was happy to see a young guy, he’s 25 or 26, have the courage to make that jump.”

Grantland: You are also a free agent. After seeing Chandler sign, does it now make you more willing to sign there?

Battier: “I’ve thought about it. For me to go overseas, it would take the cancellation of the season. On a personal level, I have a 3-year-old and a 4-month-old. It’d be very difficult to leave them with the uncertainty of maybe coming back to the NBA, maybe staying overseas for a year. If I’m going to do something, I’m going to be in for the entire year. But for me to do that, we would have to for sure cancel the NBA season.”

Grantland: Any fear that when the NBA does return, there won’t be much of a time frame for free agents to decide on teams?

Battier: “No question, no question. I’ve waited 10 years to be a free agent. This is the first time I’m a free agent and normally, the way it works is on July 1, a general manager may show up at your door at 12:01, you may get phone calls from the All-Star players saying how much they need you and want you on their team. It’s all a lovefest. From what I hear back from 1999, the last time there was a lockout, obviously, the season started the first week of January. Free agents were getting phone calls, saying ‘Here’s our offer. Call us back in an hour and let us know if you take this offer. If not, it’s off the table.’ That’s a far cry from the love letters and the phone calls you get during a normal free-agency period.”

Grantland: How would you go about solving the lockout?

Battier: “I’ve tried to really keep an open mind. I’ve tried to read a lot of different people’s perspective on the lockout. There’s so many issues, so many issues to really tackle. I think if we can get a grasp, as a group, players and owners, on two things — one will lead to the other. I think if we can really break down a fair revenue-sharing model between the teams, that will give the players a better framework to negotiate from. We’ve already agreed to roll back our salaries. We’ve already made that offer in negotiations. That was a pretty abstract number that we gave back. I know (NBA) commissioner (David) Stern said it was modest. We don’t think it was that modest as a players group, but we can get more concrete if we know exactly what the revenue-sharing model of the owners would be. I think those two issues getting solved would allow us to come together to an agreement pretty quickly.”

Grantland: Do you ever get tired of the whole “cerebral” label? Do you feel like it takes away from what you do on the court?

Grantland: What was your first thought when you were traded midseason from Houston to Memphis?

Battier: “Every player that gets traded, he may tell you otherwise, but your first thoughts are of rejection. You pour your heart and soul into a team and you’re traded to another one. Whenever you get traded, your first emotion is rejection. Why didn’t this team want me? Never mind that there’s another team that does want you and has given up something of value to get you. I think that’s just the human side of sports. That’s the initial reaction. If you’ve been traded and say otherwise, I think you’re lying.”

Grantland: After the trade settled in, what are some of the off-the-court things you had to handle?

Battier: “My wife was seven months pregnant. She had had complications with the pregnancy and actually, the day after I left to go to Memphis, she was put on bed rest. Trying to manage a 3-year-old on bed rest, and not having your husband around, and having complications with the new baby, it was as stressful of a time as I’ve ever faced in my life. Basketball is basketball. That’s the easy part. It’s what I’m trained to do. I knew I’d be fine from the hours I’d be at the gym. It’s just the hours away and trying to maintain contact with your family, especially if there’s been some illness and some concerns on the home front. That’s the difficult part. Even if everyone’s healthy, it’s just tough being away from your family initially. I was fortunate to go to Memphis where I spent my first five years. I could plug back into my social network and have beers with friends every night if I wanted to. But if I had gone to a city like Portland or Sacramento or Boston, where I don’t really know anybody, it would have been a really lonely life for a few months.”

Grantland: That Memphis locker room seemed like it would have been pretty entertaining. What’s something that people didn’t know about your teammates from last season?

Battier: “When I showed up, I was the only married guy in the room. Zach Randolph’s been with his girlfriend for a long time. Marc Gasol’s been with his girlfriend. And Jason Williams, he was married, but didn’t finish the year. But I was the only married guy in a lot of respects. It was good to see the perspective of young, single guys. You forget every now and then when you’re an old, married guy like me. It was funny. It reenergized me in a lot of ways, just to be around the excitement of young guys who were a part of something brand-new to Memphis with the playoff run.”

Grantland: Who is the toughest guy in the league to take a charge on?

Battier: “The toughest guy is probably Dwyane Wade because he probably has the best Euro-step, so he can avoid contact pretty well to avoid the charge and make it a blocking call. But the most painful is probably LeBron in the open court, which I don’t try to do too often. I think I’m the only person — and this is a badge of honor or a sign of stupidity, I don’t know which one — to take a charge from Yao Ming and Shaq in the open court and live to tell about it. A charge from Shaq on a fast break my rookie year and it was the dumbest thing I ever did in my entire life.”