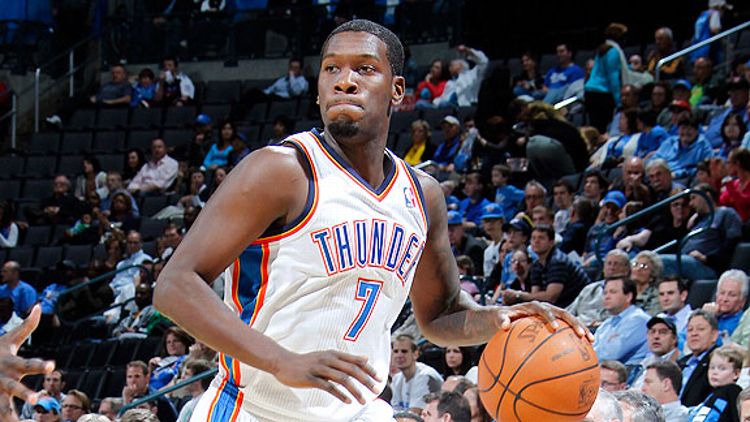 As part of our coverage of the NBA lockout, Grantland’s Jonathan Abrams checked in with Royal Ivey, a backup guard for the Oklahoma City Thunder, to see how he is spending his newfound free time. Ivey has resumed classes at the University of Texas and is pursuing a degree in elementary education.

Grantland: How are the classes going?

Grantland: What classes are you taking?

Ivey: “Childhood and adolescent development, piano, and another educational course, individual differences. This would be my third offseason that I’ve been back in school. It’s always weird coming back. I always feel like the old guy on campus, just being around the younger guys and coming down here and working out with guys. I’m just reliving the dream each time I come back.”

Grantland: Are you practicing with the college team while you’re there?

Ivey: “I actually just signed papers to become an undergraduate-student coach, so I’ll be helping out this year.”

Grantland: Do you get any double takes from students or teacher by being in class again?

Ivey: “The teachers are fine. I actually had a class with Dexter Pittman and Mo Evans and the teacher was excellent. He kind of knew we all played professional basketball. He asked a lot of questions about our profession and how it was and why we were coming back to school. That’s the biggest question I get: Why am I coming back to school?”

Grantland: That was the next question. Why are you going back?

Ivey: “Because I’m six hours away and I want to become a coach at the collegiate level, so in order to do that I need my degree, and it was something I had my mind set on when I walked in the first day — no matter what I was going to get my degree. In a couple months, it’ll come true.”

Grantland: Have you thought about what graduation day will mean for you?

Ivey: “It’ll mean a lot. Both of my parents graduated from college. My mom got her masters, so I’m just following suit. I can tell my kids I played in the league for so many years, but if I don’t have that degree, it’s nothing. That means everything to me. That’s my backbone. That’s something I can fall back on, and it’s something that no one can take away from me.”

Grantland: Kevin Durant returned to the University of Texas last summer. Did you guys have any of the same classes?

Ivey: “No, I wasn’t in the class with Kevin Durant. He’s at the starting line. We were down here at the same time, but we weren’t in the same classes.”

Grantland: What was the atmosphere of the seven-game series against Memphis like last playoffs?

Ivey: “That was unreal. That was what basketball’s about at the next level, just being in a Game 7, them beating us at our house, us beating them at their house, the triple-overtime game, the fans taunting us on the bench. It was just a crazy environment. When we got back to the hotel, the fans were booing us in Memphis. It was just crazy. That’s playoff basketball. The stakes were high, and it was a great series.”

Grantland: Complete this sentence: The Thunder would have beaten the Mavericks if …

Ivey: “The Thunder would have beaten the Mavericks if it was 2013. It’s experience. Those guys have been there before. They tasted a little bit losing in ’06 against the Heat, and experience goes a long way. They got that savvy and they played with it. It was their year, and they won and went through everybody and they played well. That goes to show: Experience does win championships.”

Grantland: Russell Westbrook received a lot of criticism for shooting often in the playoffs. Did you think it was warranted?

Ivey: “That’s what he does. KD is no. 1. Russell is no. 2. We need Russell to score. He’s doing his job. He’s a point guard. He’s learning his craft. He’s good at his craft, and he’s just being aggressive. We need him to do that, so I wouldn’t look down on him because he shot a lot. He’s a good player. You want your good players with the ball. That’s what it was.”

Grantland: Lastly, how did you get your name?

Ivey: “I’m named after my grandfather. His name is Roy Allan. He was one of the first African-American stage directors/directors in television. He worked at CBS. He’s actually in the film guild. I was named after him. His full name is Roy Allan, so my parents just took the Roy and Allan and chopped it up and made Royal.”