Here’s to Game 7, May It Not Be Defined By the Absurd 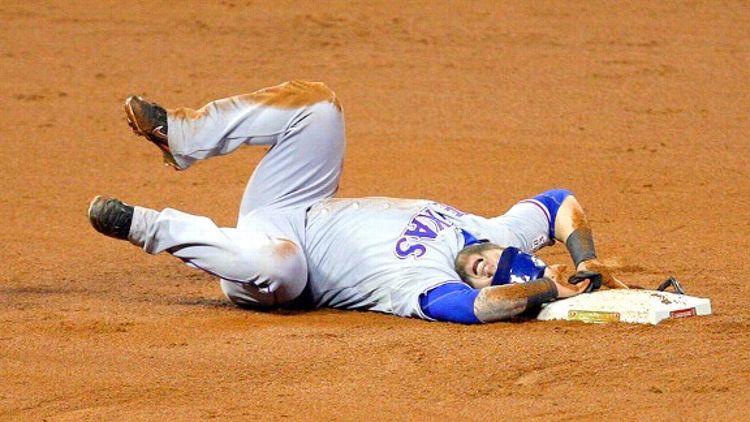 There are hundreds of questions we can ask heading into Game 7. But one keeps popping into my head, standing alone in its absurdity during a postseason that’s been nothing if not crazy.

How could home field for the deciding game of the one of most exhilarating World Series in baseball history be decided by an embarrassed Commissioner, in a meaningless game, nine years ago?

The St. Louis Cardinals are heavy favorites to win their second World Series in six years for several reasons. The sharps like that Chris Carpenter takes his perfect 6-0 home postseason record into Game 7 against an untested and recently torched Matt Harrison. They’re down on the Rangers after a Game 6 as excruciating as any game could get, figuring there’s no chance Texas rebounds from that kind of heartbreak.

But Prince Fielder’s game-winning three-run homer in this year’s All-Star Game, combined with the dumbest rule in sports that grants World Series home-field advantage to the winning All-Star side, is as big a reason as any. If the Rangers were at home tonight, we’d rightfully a lot differently about their chances to bounce back. But a 96-win Texas team must instead pull out a win playing at 90-win St. Louis. And no, the fact that C.J. Wilson was the one who gave up the homer doesn’t change anything.

Fortunately, home field alone guarantees nothing, and either team could supply the magic tonight.

The Cardinals won’t be at full strength. Matt Holliday is out with a jammed wrist on his already injured right hand. Of course this might not be a bad thing, especially if you ask folks on Twitter to pick the Cards’ key to victory for Game 7. Holliday made it two highly visibility defensive blunders in his playoff career last night, botching a routine popup that led to a go-ahead Rangers run. He’s also been lousy at the plate, drawing a bunch of walks but also hitting just .158 with one extra-base hit in six games, five of those out of the cleanup spot. Whether that is a small sample noise or the result of his hand injury bothering him in the NLDS, mysteriously vanishing in the NLCS, then reappearing for the World Series is anyone’s guess. But even the most analytical Cardinals fan isn’t weeping too hard over hot-hitting Allen Craig taking Holliday’s place.

Meanwhile, the elbow injury that nagged Carpenter earlier in the playoffs supposedly isn’t an issue. But starting on three days’ rest against a potent lineup very well might be, playoff history be damned. Then there’s Rafael Furcal, whose offensive horror show might very well be a simple matter of small-sample noise, though a .176 average and a .210 on-base percentage in 81 postseason plate appearances is still a little scary for a leadoff man. The Cardinals have also dealt with increasing struggles from Jason Motte and a general degradation in bullpen effectiveness; again, possibly just small-sample randomness, or perhaps due to their heavy use throughout October.

The Rangers have an edge with all hands on deck tonight. But they, too, aren’t playing at 100 percent. Nelson Cruz will play through a strained groin, while Mike Napoli will play through a horrific-looking ankle injury that seemed destined to knock him out midgame last night before the Rangers’ Paul Bunyan bounced back up, shook it off, and kept on going. Napoli didn’t show any major lingering effects thereafter. But Cruz’s defense will bear watching, with potential lack of mobility added to his newly discovered Bobby Abreu approach to outfield walls.

The guys I’ll be watching tonight? Veteran Rangers bench coach Jackie Moore, and pitching coach Mike Maddux. How to say this delicately … Ron Washington has been a gigantic, freaking disaster. Go back through last night’s wrap-up and count the major tactical errors on the Rangers side. There are plenty of phenomenally smart people in the Rangers organization who swear by Washington’s leadership skills and enthusiasm, and declare him a great leader of men. Groovy. In some ways, that kind of guidance could be more important than a little blunder or two. The problem is that it’s rarely a little blunder or two. It’s a whole bunch of them — the kind of mistakes you don’t second-guess because a move worked out poorly. The Rangers are a supremely talented team that has been able to overcome those flubs, with Washington going all-in repeatedly with rags, then pulling inside straights on every river. He didn’t last night, and the Cardinals finally took advantage.

Maybe Moore has a run expectancy chart in hand to show Wash that pinch-hitting Esteban German with a runner on first and two outs against a right-handed reliever isn’t worth leaving the game up to Mark Lowe later. Maybe Maddux reminds his skipper that Alexi Ogando’s control is as long gone as Tim McCarver’s pop culture references. There’s no malice behind such criticism toward Washington (or Tony La Russa), only a fervent desire to see this World Series for the ages decided by moments like this and this, and less on disasters like this.

Errors are part of the game, of course, but this is simply a matter of aesthetics. The hometown kid blasting a ball deep into the night and dog-piling into his teammates gives you goose bumps. A huge mistake with everything on the line just leaves you with regret.