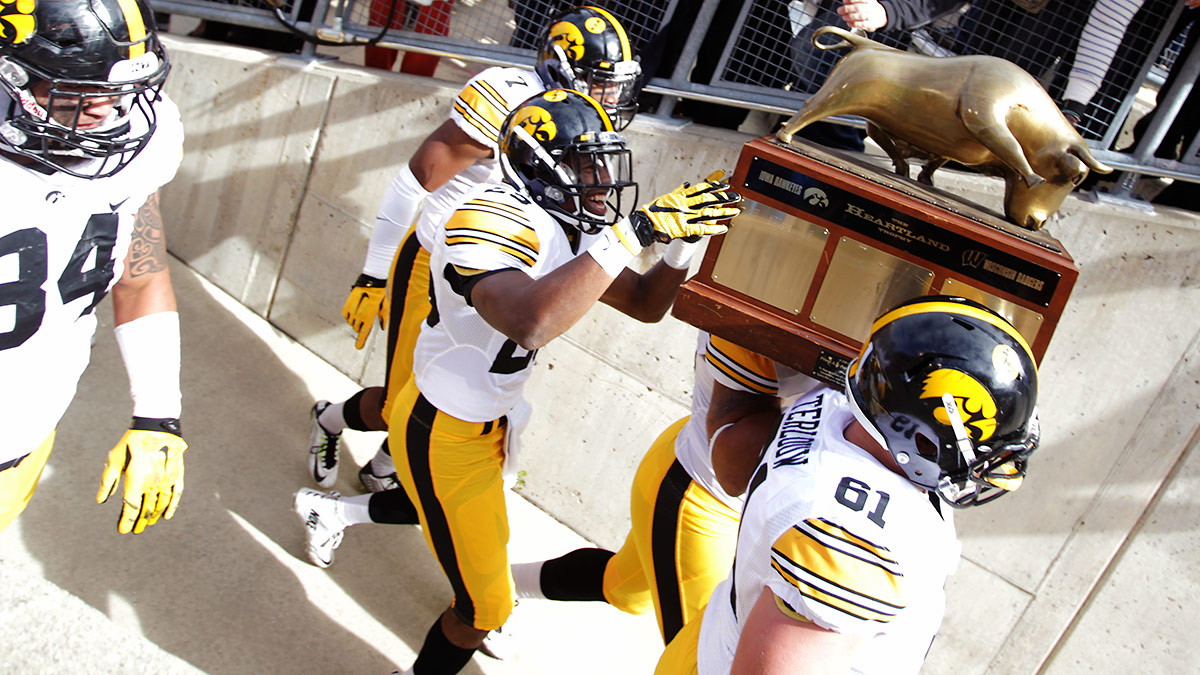 It’s official: We’re living in the new golden age of Big Ten football. While it once seemed like the Pac-12 would supplant the SEC as college football’s preeminent conference, the Big Ten has swooped in and stolen that title. The league of Legends and Leaders is deeper, chicer, and more interesting than ever before — or at least since Woody and Bo were patrolling the sidelines. Look no further than the latest AP poll, which contains five Big Ten teams, including two in the top five. Herewith, I present 14 explanations for this phenomenon, because we all know that 14 is the new 10.

1. The Noon Games Are Watchable Again

In recent years, quality noon Eastern matchups have become depressingly rare, primarily because of the Big Ten’s decline. After all, Pac-12 teams aren’t going to play at 9 a.m. local time, the SEC has traditionally owned the late afternoon and evening time slots, and the ACC is … the ACC. Give credit to the Big 12 for trying to preserve the watchability of the noon slate, but after conference realignment and Texas’s descent into decrepitude, it can only do so much. Consequently, viewers had come to endure a three-and-a-half-hour chasm between the end of College GameDay and anything resembling watchable football.

2. Ezekiel Elliott Is the Most Entertaining Player in College Football

Leonard Fournette may be better, but Zeke is more exciting to watch. There’s just an ineffable (yet unmistakable) coolness about him that conjures memories of Reggie Bush, Herschel Walker, and Bo Jackson and reminds us why running back was once regarded as the most glamorous position in football.

Partly this is due to his alliterative name, which has a much better ring to it than, say, “Nick Chubb” — and that’s to say nothing of Zeke’s dearly departed crop top. Mostly, though, it’s a result of his sui generis style of play. Elliott accelerates through holes with jaw-dropping burst, weaves in and out of defenders like Lionel Messi, and is always thinking two steps (or jukes) ahead of the opposition. And as Saturday’s game against Indiana proved, he’s also still college football’s biggest home run hitter:

If you haven’t read Jeremy Fowler’s retrospective on Meyer’s tumultuous tenure at Florida, go do that now. It paints an unflattering portrait of an out-of-control, excess-obsessed program, and will make you crave a The U-like documentary on the 2008–2010 Gators. The 2009 season seemed to weigh particularly hard on Meyer, to the point that his health began to deteriorate and he felt the need to resign.

Of course, much of this stress stemmed from having to defend a national championship, which is one of the things that make this Buckeyes season so damn interesting. When Meyer took his talents to Columbus, we were told he was a changed man, but that’s easy to say when you’re in the honeymoon phase of a new job. At a program like Ohio State, maintaining a national title contender is harder than building one, so this is the first year that will truly indicate whether Meyer has grown since his anxiety-inducing Florida days. The jury is still very much out on this.

4. There Are Pro QB Prospects Galore

As recently as three years ago, it would have seemed impossible for three of the top quarterbacks in a draft class to come from Ohio State (Cardale Jones), Michigan State (Connor Cook), and Penn State (Christian Hackenberg), but that’s exactly where we were entering this season. Sure, Jones’s stock fell a bit in September, and Cal’s Jared Goff has perhaps surpassed all three of them on draft boards, but the original point stands: If you want a glimpse at NFL gunslingers of the future, you should be watching the Big Ten.

Together, Jones, Cook, and Hackenberg seem to represent a shift back to conventional pocket passers in the pro game, which is only natural given the disappointments of Robert Griffin III, Johnny Manziel, and Colin Kaepernick. (Spread enthusiasts are looking at you to save the day, Marcus!) Who would’ve thought that the Big Ten would ever be at the vanguard of anything (well, aside from shitty rule proposals)?

5. The Most Compelling Matchup of Week 6 Is a Showdown Between Undefeated Northwestern and 4-1 Michigan

Good thing that college football games can’t end in a tie, because otherwise this matchup would surely result in a 0-0 slugfest given how dominant the Wildcats and Wolverines defenses have been this season. They’re ranked first and second, respectively, in points allowed, and haven’t played particularly easy schedules, either. In fact, Michigan hasn’t given up a score in two weeks, and its 24-17 opening-week loss to still-undefeated Utah is looking better with each passing contest; meanwhile, Northwestern’s 16-6 win over Stanford has become especially impressive in light of the Cardinal’s blowouts of USC and Arizona. Forget about the classic “unstoppable force vs. immovable object” cliché: It’s time to find out what happens when two immovable objects meet.

6. Speaking of Which: HARBAUGH!

It’s great having Jim back in college football, isn’t it? That silly satellite camp controversy made for some excellent offseason drama, and he’s bringing sexy back to the FBS by coaching shirtless (if only Mark Mangino had done this!):

Most importantly, Michigan finally appears to be back, which needed to happen for the Big Ten to truly return to prominence. Next week’s Michigan State–Michigan matchup is shaping up to be a doozy, and the Ohio State–Michigan game should actually be competitive this year. Suffice it to say that Harbaugh’s been a marked upgrade over this guy:

7. The Big Ten Is the Conference of the Future — and Also America’s Conference

With programs in all the major TV markets east of Chicago — New York (Rutgers), D.C. (Maryland), and West Lafayette (Purdue) — the Big Ten has evolved into the most innovative, forward-thinking brand in college sports. Moreover, it’s come to embody the Manifest Destiny ethos that has long been the backbone of American culture. Don’t think a conference called the Big Ten can have 14 teams? You’re wrong. Question whether a traditional Big 12 power like Nebraska can fit in another conference? WRONG AGAIN.

What I’m saying is that Jim Delany is basically Steve Jobs, and that you’re unpatriotic if you don’t recognize the greatness of the Big Ten.

For as much as the Big Ten has evolved lately, it’s still managed to maintain some semblance of its former self. Take Purdue: As usual, the Boilermakers are bad. A Virginia Tech team that could hang only 13 points on Pittsburgh destroyed them 51-24, and two Group of 5 schools (Marshall and Bowling Green) beat them, too. The Falcons even saw fit to commemorate the occasion with some anti–Big Ten propaganda:

Nevertheless, Purdue nearly upset Sparty last week, because that’s what Purdue does. It’s comforting to know this will always remain true, no matter what else changes in the Big Ten.

The man will call a fake punt on fourth-and-1 from his own 16-yard line, because you’re going to have to take a few outlandish risks to try to defeat the no. 1 team in the country.

The Hoosiers may not have beaten Ohio State, but they’re still pretty decent this season, which by their standards makes them a juggernaut. If this isn’t a sign of the Big Ten’s inexorable march toward world domination, I don’t know what is.

10. Kirk Ferentz and Iowa Are Rolling

For the first time in five years, the Hawkeyes are ranked in the AP poll, and it’s no fluke: They boast solid quarterback play, a dependable run game, and a positively stingy defense. You know what they say about Ferentz: That man is worth every penny.

If Iowa and Northwestern take care of business this weekend, their Week 7 showdown is poised to be the unlikeliest battle of undefeateds in college football history. Would GameDay really travel to Evanston for Hawkeyes-Wildcats on a Saturday with USC–Notre Dame, Florida–LSU, and Alabama–Texas A&M? We might soon find out.

11. Illinois Is a Model of Perseverance, Toughness, and Self-Belief

When the Illini lost their head coach one week before the season began, they could have easily thrown in the towel on 2015. After all, Tim Beckman is widely regarded as an irreplaceable football savant, and interim coaches don’t have a particularly illustrious history. Nevertheless, Illinois has rebounded impressively from this seeming deathblow, getting off to its best start since the Ron Zook era.

It remains to be seen if the Illini are for real — we may find out this weekend in their clash against Iowa — but they definitely lead the FBS in determination and resolve. We should all strive to be more like Illinois football.

When Paul Chryst inexplicably flees Wisconsin for, like, Colorado or UCF at the end of the season, we’ll be blessed with the opportunity to witness Alvarez coach the Badgers in their bowl game for the third time in four years. The avuncular Alvarez was last seen dropping a celebratory Nae Nae after upsetting Auburn in the Outback Bowl, so this year’s installment has a lot to live up to.

13. Dilly Bar Dan Is the Paragon of Humanity

Can you imagine Nick Saban’s reaction if an Alabama assistant was just casually eating a Dilly Bar on the sideline? Let’s all take a moment to appreciate Dilly Bar Dan, who is a national treasure, as well as the conference that made him possible. Here’s hoping we get to see Dilly Bar Dan again this season.

14. The Recruiting Wars Are Just Heating Up

Between Meyer, Harbaugh, and James Franklin, the Big Ten now harbors three of the most cutthroat recruiters in the game. Meyer’s ruthless methods initially ruffled some feathers in the Midwest, but now they’re the norm, and coaches like Mark Dantonio and Mike Riley have no choice but to follow suit. As a result, the Big Ten’s recruiting scene is truly the best of both worlds — it’s all the fun of the SEC, sans the guilt that comes with oversigning.