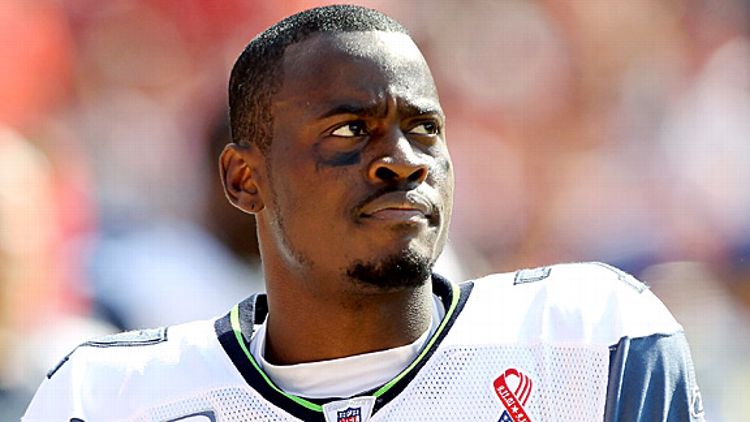 The Bad Quarterback League has twisted the lens through which we watch the NFL. Never before has anyone been so excited for Tarvaris Jackson to take the field, or so shocked when Alex Smith repeatedly completed passes to members of his own team. And certainly, never before has anyone ever said: “Can you please put the Titans and Jaguars on the big screen? I need to see this.”

Every time the ball is heaved in the air, you are filled with hope for the worst. And unlike traditional fantasy leagues, every play has the potential to be decisive in the BQBL. Week 1 has shown us just how volatile one man’s production can be. Except Tom Brady. He will always be annoyingly effective, and look handsome and unathletic while doing it.

Before we get to this week’s scores, a couple more clarifications of the rules:

Pittsburgh Steelers (Ben Roethlisberger), 49 points: Ben Roethlisberger, Ed Reed is not on your team. Big Ben’s total of five turnovers (three interceptions, two fumbles) in Week 1 gives him 24 bonus points in the BQBL. Attempting to mount a comeback, he was doing that “he’s going to get sacked, oh wait, no he’s not, he’s going to throw for a touchdown” thing he always does, but after extending the play, he didn’t find anyone open but Raven safety Ed Reed. There was a point in the fourth quarter when he appeared in a shot on the sideline looking dejected, eye black smudged, sweat dripping off his bulbous nose. You couldn’t help but feel terrible for the former Super Bowl champion. But don’t feel too bad for the guy, and don’t start him next week in the BQBL — the Steelers play the Seattle Seahawks and the BQBL’s early pick for MVP, Tarvaris Jackson.

Minnesota Vikings (Donovan McNabb), 45 points: We didn’t include a bonus score for a team that had fewer than 50 passing yards because, come on, that would never happen. Well, thanks a lot, Donovan McNabb. Somehow McNabb managed to throw for only 39 more yards than you did last Sunday. Forget end zone to end zone, that is not even the width of the field. Throw in an interception, only 15 attempts, and a sub-50 percent completion percentage and you have yourself a guaranteed BQBL win if you started the soup-slinger this week. Did this performance just open the door for rumors of the return of the gunslinger? Hope so; he was built for the BQBL.

Seattle Seahawks (Tarvaris Jackson), 35 points: The biggest problem with Tarvaris Jackson in the BQBL? You can start him only 11 times. To be fair, he started the game by completing his first six passes (That’s what the box score says. We still have trouble believing it.) but soon calmed the Seahawk BQBL owners with an interception right before the end of the first half. In true Tarvaris Jackson form, he fumbled three times and threw for only 197 yards. McNabb and Roethlisberger’s big BQBL weeks felt like anomalies, but for Jackson, this 35-point week felt like modus operandi.

Carolina Panthers (Cam Newton), -12: Two years ago, when Cam Newton was in junior college playing against defensive powerhouses like Trinity Valley Community College and Northeastern Oklahoma A&M College, he never once threw for 400 yards. This Sunday, when Newton made his NFL debut against the Arizona Cardinals, he threw for 422 yards, two touchdowns, and even jumped over the pile Walter Payton-style for another TD. He looked good doing it, too. Not forcing throws, not relying on his running ability, but also not, you know, winning the game. If you own the Carolina Panthers in the BQBL, it is not time to panic — they play the Green Bay Packers next week, and it is highly unlikely Newton will get the opportunity to be flagged for another excessive celebration penalty.

Kansas City Chiefs (Matt Cassel), 27 points: Matt Cassel scored 27 BQBL points this week for the Chiefs. If he goes down this season, Tyler Palko might find a way to hit triple digits.

Chicago Bears (Jay Cutler), 19 21 points: Even in a big win for the Chicago Bears, Jay Cutler still manages to score 25 points for throwing a pick six.

Atlanta Falcons (Matt Ryan), 14 points: You should get extra points if you just leave the ball on the ground untouched for the defense to run in for a touchdown.

Cleveland Browns (Colt McCoy), 12 points: This week, Colt McCoy proved that you can lose by 10 points, score 12 BQBL points, and still impress with your performance.

Philadelphia Eagles (Micheal Michael Vick), 8 points: Michael Vick scored 26 points in traditional fantasy football this week and 8 in the BQBL. Oddly, when you look at the numbers, his week may be best measured by the BQBL. The low completion percentage, a lost fumble, and under 200 yards passing wasn’t as encouraging as it looked in the highlight package.

Tennessee Titans (Matt Hasselbeck), 7 points: It is nice to see that Matt Hasselbeck still has what it takes to throw game-losing interceptions.

Cincinnati Bengals (Andy Dalton and Bruce Gradkowski), 6 8 points: Don’t let the stats fool you here. The only reason the Bengals didn’t score in double digits in the BQBL was because the Browns defense literally forgot to cover A.J. Green.

The Message Board: Grantland Staff Edition

Below is this week’s Bad QB League e-mail chain from the Grantland staff and Joe House, Friend of Grantland. We’ve edited it a bit to correct names, etc., but otherwise this thread remains mostly intact.

In almost every conceivable way, I’m in on this year’s Steelers, and more specifically, Mr. Big Ben. Fantasy football, picks leagues, prop bets. I need the Steelers to win, Big Ben to throw for 7,000 yards, and the entire Ravens defense to be involved in a massive suspension-resulting bar fight.

This makes today all the more difficult. For at least four Sundays this year, I’m going to have to root for and against a guy I already feel terrible rooting for. With every throw, my soul is torn in eight directions. This is supposed to be fun, right?

This is Larimer. I have to use Jacoby’s phone because I still have an antique cell phone … My rage at Joe Flacco cannot be contained right now. If I saw him in a dark alley, things would get a little stabby. I am so pissed, I just slammed my hand down and threw a tantrum.

Kolb starts his year off with a solid fumble, dumps off nowhere close to the first-down marker and then removes his helmet to reveal his new look, best described as “Extra at Merlotte’s on True Blood.” I feel better about my first-round pick.

I really regret not taking Tarvaris Jackson. Every time he goes back to pass, I fully expect him to either fumble, throw a pick or shit on himself.

Tarvaris and Alex Smith are putting up the Bizarro version of the Brees-Rodgers battle this week.

I’m filling my garage up with carbon monoxide right now. Will see you all in hell.

Rex Grossman is having one of those games that as you start watching it, you think he’s playing pretty shittily and always under pressure and throwing off his back foot looking unsteady as hell. In fact, you’re so confident that you have this one locked up, you start watching other games and start to not really pay attention. The next thing you know, you see a stat line in the fourth quarter and you realize that he’s put together 300+ passing yards, 2 TDs, and a statistically really productive game.

This is especially difficult to watch, as I could have started Eli and the Giants, who have put up a real stinker.

I don’t know what to believe anymore. Congrats to House for not only winning this week, but for having what is clearly a very talented Washington Redskins team this year that can’t help but go 19-0 this year.

I don’t care that I went 1-4 in the Hilton SuperContest, Cam Newton throwing for 400+ yards made my day. My new favorite tradition is creating dumb fantasy leagues and then having Jay Kang’s teams start the season off with negative points in them.

If I calculated right, I’m at negative 19. Which means that if Cam gets detained and questioned by police twice tonight, I’ll have exactly one point.

Sanchez with a pick-6!!!!! Did anyone start him???? Whoops, stepped out of bounds. Either way how exciting are pick-6’s in the Bad QB league? Have we copyrighted the BQBL yet? I think we’re sitting on a billion-dollar property.

///IS TONY ROMO A BAD QB WITH ‘REALLY GOOD RECEIVERS’?
///IF ANDY DALTON DYED HIS HAIR UN-RED, WOULD HE BE BETTER AT LIFE/FOOTBALL?
///WILL COLT MCCOY EVER STOP DRINKING MILK?
///CAN TARVARIS JACKSON WIN THE 2K12 ARENA LEAGUE MVP?
///IS THIS THE BEGINNING OF THE END OF ELI MANNING’S CAREER?
///IS REX GROSSMAN THE NEXT
///HOW MUCH MORE BLOATED WILL PEYTON MANNING’S FACE GET THIS SEASON?
///WILL JAY CUTLER’S BRO-FACE GET MORE BRO-BLOATED THIS SEASON?
///CAN SOME1 ‘TRICK’ JAY KANG INTO OFFLOADING CAM NEWTON BASED ON WEEK 1’S EMOTIONAL PAIN?
///WILL MATT ‘MATTY ICE’ RYAN LEAD THE NFL IN INTERCEPTIONS?
///SHOULD THE PATS HAVE KEPT MATT CASSEL OVER TOM BRADY?
///IF MATT SCHAUB THREW 2 INT AGAINST THE COLTS, HOW MANY WILL HE THROW AGAINST A REAL TEAM?
///CAN LUKE MCCOWN REPLACE JOSH MCCOWN AS THE GREATEST MCCOWN IN [BAD] QB HISTORY?
///WILL MATT HASSELBECK BE ABLE TO STEAL HIS BROTHER’S JOB IN 1-4 YEARS?
///IS JASON SEHORN STILL MARRIED 2 THAT DUDE FROM LAW&ORDER [ICE-T]?
///CAN JOSH FREEMAN THROW THE FOOTBALL INTO THAT SHIP AT TAMPA BAY’S FIELD KINDA LIKE MICHAEL VICK IN THAT ONE COMMERCIAL/VIRAL VIDEO?
///DOES KEVIN KOLB REGRET ‘ACTUALLY PLAYING IN A GAME’?
///CAN DREW BREES’ SON BECOME ‘MORE FAMOUS’ THAN JASON KIDD’S SON IF HE WINS ANOTHER SUPER BOWL?
///CAN MICHAEL VICK PLAY A COMPLEMENTARY ROLE TO ANDRE IGUODALA ON THE 76ERS NEXT SEASON?
///WILL BEN ROETHLESSBURGERS LEAD THE LEAGUE IN ‘ANGRY LOOKS AT HIS TEAMMATES,’ NARROWLY BEATING PHILIP RIVERS?
///WAS IT A BAD SIGN THAT MARK SANCHEZ’S BODY LANGUAGE WAS STILL ‘SORRY GUYS’ AFTER A HUGE WIN?
///WILL TONY ROMO LEAD THE LEAGUE IN PICK-6 RETURNS 4 WINS?
///WILL CAM NEWTON LEAD THE LEAGUE IN GAME-WINNING DRIVES BC OF HIS REFUSAL 2 LOSE?
///CAN RYAN LEAF STILL MAKE AN NFL ROSTER?
///WILL TOM BRADY PLAY IN UGGS?
///WILL G-D FIND A WAY TO GET TIM TEBOW ON THE FIELD MONDAY NIGHT?
///DO THE RAIDERS MISS JAMARCUS RUSSELL BEING ‘THE FAT, SLOW MICHAEL VICK’ FOR LOL-ING PURPOSES?

Assuming you really exist, I’m glad you did not attend my wedding.

I only have one thing to add and it’s this: If I lose to David F’ing Cho after the massive-mouth-poop Tony Romo delivered to poor Cousin Sal & all of Cowboy Nation, then I might have to reconsider my participation in this mostly-fantastic league. His stat-sheet may resemble/ signify that of a decent QB performance (Grossman-esque, perhaps), but what he single-handedly did to the ‘Boys chances of winning the game is a crime in every state of the union except Louisiana. If this were a college game, there would be (warranted) calls for a point-shaving investigation. The Old Romo-Slinger snatched defeat from the jaws of victory the way Entourage snatched a credible ending from … actually, scratch that, Entourage has sucked for years. Anyhow, this league purports to celebrate Bad Quarterback performances; with due credit to no. 5 in purple and the Tarvaris-fail, Tony was right there with the best of them.