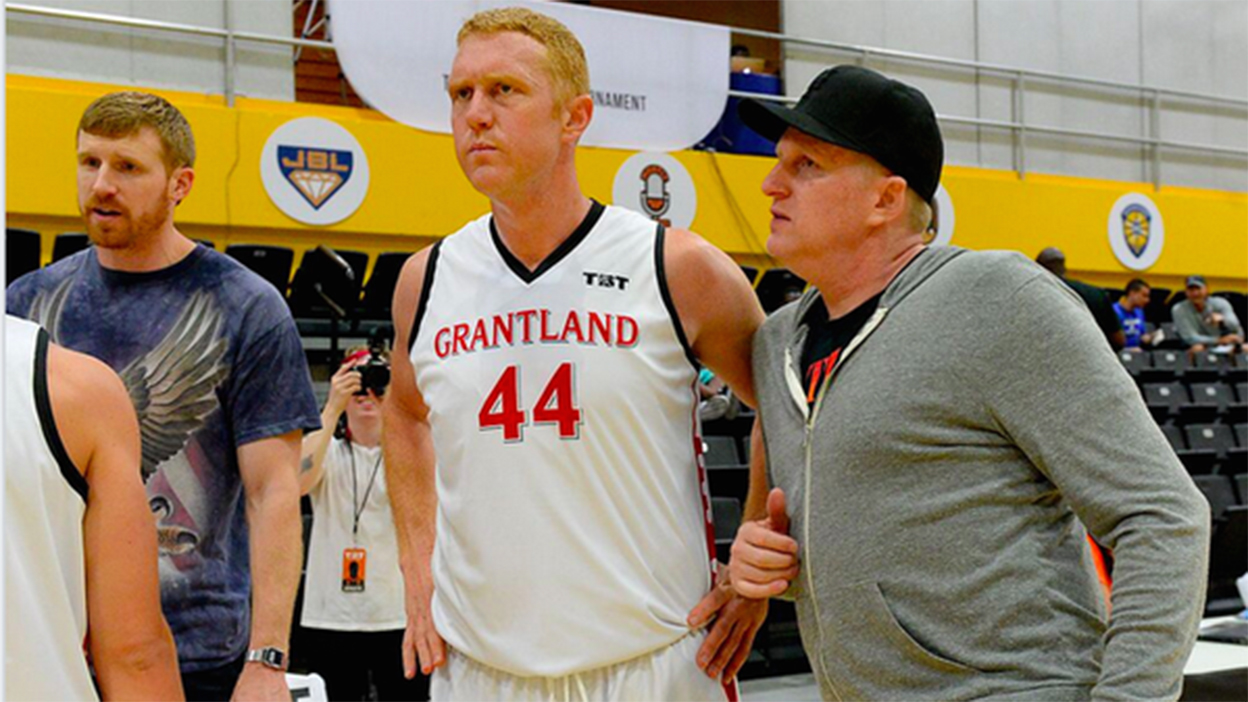 “I’ve been thinking about this for months, and I never once thought about losing,” Michael Rapaport said Friday morning at Saint Monica High School in Santa Monica. Rapaport was acting as a coach and booster for team Grantland, one of the 97 teams competing in the second-annual The Basketball Tournament. The team was holding its first (and only) practice, and Rapaport, who was there as “the motivation guy, not the X’s-and-O’s guy,” was taken aback that I would even bring up losing.

As we stood on the sideline watching Brian Scalabrine lead the team through some high pick-and-rolls, I had asked Rapaport what he’d do if the team lost in its first or second game.

“I disassociate myself and try to take my talents somewhere else, immediately,” he replied, before adding that losing was not an option.

Rapaport’s confidence was justified. With bona fide ex-NBA guys like Mike Bibby, Jason Williams, and Scalabrine on the official roster, Grantland was a 1-seed and the tournament’s unofficial favorite. It was the team the media mentioned when talking about TBT, partly because ESPN owns Grantland (which sponsored the team) and partly because the squad boasted the most recognizable names.

And sure enough, on Saturday, Grantland breezed through its first game against a talented but overmatched Venice Basketball League team, winning 93-63.

But then on Sunday, the Grantlanders matched up against 7outz, a team from Las Vegas featuring Marcus Banks, a lottery selection in the 2003 NBA draft, and Drew Lavender, a former McDonald’s All American. With seconds left in regulation and the game tied at 82, this happened:

Lavender hit a 3, and just like that, Grantland was done. It wouldn’t be going to Chicago next weekend for the Super 17. It wouldn’t be collecting the $1 million grand prize.

How could this happen?

The guys on the team gave staple press conference answers: The ball bounced the wrong way a couple of times, and a few calls didn’t go our way; the team we were playing was really tough, and they hit a huge shot; we ran out of gas in the last few minutes.

All of that is true. Grantland controlled most of the game and took a seven-point lead into halftime. At the end, with the game tied, things broke down. Reggie Moore tripped with the ball off an inbounds pass and was called for a travel; 7outz capitalized on the mistake with Lavender’s shot. But to truly understand how this Goliath met its demise, we have to go back a bit further.

This spring, the team’s center, Luke Bonner, broke his arm jogging.1 The break was pretty gruesome and Bonner found himself in the hospital, heavily medicated for a couple of weeks. Bonner is the only player on the roster who played in the tournament last year, and he constructed this year’s team with his brother Matt (of Spurs fame, but currently unsigned).

“The injury was really the prime time of when we were going to construct the team,” Luke Bonner said. “So then we kind of got delayed a little bit because everyone has other stuff going on in their lives, obviously. And then, I think we were in our last week and we were starting to panic because we didn’t think we’d have enough players.”

Matt Bonner crafted a depth chart with approximately 10 targets at each position, grouping the players into tiers such as “Gone But Not Forgotten” (older guys) and “Red Flag” (guys who might be disruptive, or who might not make it to the tournament). But with little time before the deadline to register for the tournament, the roster was looking thin.

The brothers ended up finding strong players like point guard Moore and small forward Maxie Esho by contacting prep school coaches they knew from New Hampshire, where Luke Bonner lives. But they lost other players. Reggie Williams, who played for the Spurs last season, backed out because of NBA contract negotiations; Royal Ivey was busy this past weekend; and, most devastatingly — for fans as much as for the team — Jason “White Chocolate” Williams went AWOL.

On Sunday, the team was down to six players, meaning only one sub. None of them had experience playing together except for the previous day’s game. 7outz, on the other hand, brought nine, some of whom were familiar with one another.

“I think we obviously had a target [on us],” Luke Bonner said after the game. “Honestly, not even just the fact that we had a couple NBA players, but it just being Grantland — that brought a lot of attention as well.”

For some teams, the tournament was a “hoop dream,” as Rapaport said at Friday’s practice, back when the mood was lighter. But even more so, it was the TBT founders’ dream: The high stakes and open system, which allowed anyone to create a team so long as they attracted enough fan engagement on social media, had resulted in a thrilling game of summer basketball.

Even Grantland, though heartbroken, was not completely dejected. “Guys were pissed off and it sucked, but I think they had a good enough time and they kind of got a good enough feel for it, and got pretty fired up to try to figure some things out,” Luke Bonner said. “I think some of those guys, particularly Scal and Bibby, they got a feel for it and got into it, and I would be shocked if they didn’t give it a go again next year.”

Rapaport, for one, said he had “a fucking blast” and that “to be emotionally involved with basketball at that high of a level was a dream come true for me.”

“So you’re not going to disassociate yourself?” I asked.