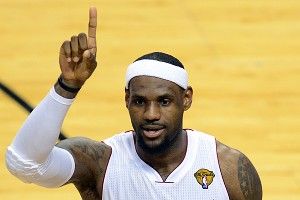 Jalen stopped by the Grantland studio between SportsCenter hits to record the pod, and he was super pumped about it. He schooled me on watching the Miami Heat win the championship on the court (LeBron James going to the post was key), the scene in the locker room after the game (they have beer as well as champagne), and the following nightclub celebration (you can wear a T-shirt with your face on it when you’re a champion). We then turned our attention to other teams that could challenge the Heat and the Oklahoma City Thunder next year and declared it won’t happen. At the end of the pod, we broke down the draft class and decided that Tony Parker should never be suing a nightclub for $20 million. Ever.

Also, don’t think that just because the NBA season is over, the people will stop getting what they want. We will record a pod every week, year round.

Previously on the Grantland Network:
The Basketball Jones
The Triangle Podcast
Men in Blazers with Seth Meyers