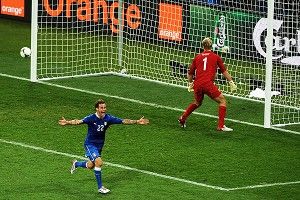 At long last, Rog gets out from in front of the television and emigrates to Donetsk (the Crappiest Part of Ukraine) to provide some on-the-ground insight of the wonder that is the Euro 2012. In this bi-continental podcast, the Men in Blazers cover all the peculiarities of Polkraine, including press conference posturing, obese Ukrainian television pundits, and, of course, Chicken Kiev.

Plus, Michael and Roger offer a Euro Eulogy for their beloved England following the latest masochistic penalty kick loss, this time to Italy, and preview this week’s semifinals. While everyone expects Spain vs. Germany in the final, the blazered men imagine a different scenario.