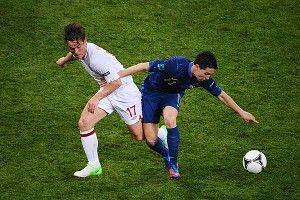 Euro fever is spreading. Now just under a week into Euro 2012, the Men in Blazers gather to gauge their affliction. For Michael, it’s an optimistic malady, with side effects that include an undying confidence in England’s chances at the tournament. But for ol’ Rog, it’s a disease that carries glass-half-empty pessimism to epic levels.

But it’s not the only thing that the blazered men disagree upon during this week’s pod. Ultimately, it all comes down to one question: Which team do these lads support — Team Lalas or Ballack?