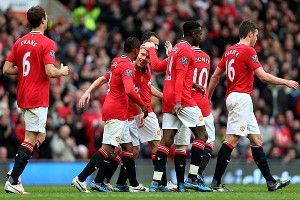 In a smashing weekend of topflight football drama, both Questionable Penalty and Clear Offside Goal took their turns in the spotlight. Elsewhere, Manchester United delivered more of the same: the ruthless pragmatism that has seen them win 11 out of their last 12 matches, effectively locking up the Premier League title in the process. While neighboring Manchester City continued to implode against Arsenal, as Mario Balotelli made fans wonder what would come first — a red card or institutionalization. In this week’s podcast, the Men in Blazers tackle both houses of Manchester and then turn their attention to the breathless race for third and fourth place.

Plus, Michael and Roger look ahead to an FA Cup semifinal weekend that could produce a Clash of the Blazers Chelsea v. Everton final. This may very well be the beginning of the end.

Previously on the Grantland Network:
The Basketball Jones
The Jalen Rose Show