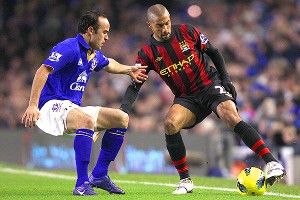 The Premier League race is blown wide open thanks to the defeat of Manchester City at the hands of America’s Team, and Michael Davies and Roger Bennett couldn’t be happier. This latest turn in the EPL’s made-for-TV script features An MLS’s St. Landon of Donovan. A month into his second loan spell, Donovan has dished out one miracle after another, turning assists into the new goals.

But after examining the rest of the midweek action and deciphering the cryptic meaning behind the latest round of FA Cup, the Men in Blazers turn their attention to matters of graver import. Michael and Roger are joined by American footballing legend Gerry Baker. The New Rochelle, N.Y., native scored hat tricks in the English top-flight long before Clint Dempsey was a twinkle in his mother’s eye. Now a forgotten figure in U.S. soccer lore, Gerry even remains ineligible for the U.S. Soccer Hall of Fame. To help right such an injustice, MiB launch their newest campaign, encouraging listeners to e-mail halloffame@ussoccer.org and lobby on Baker’s behalf. Let’s all do our part to make sure soccer remains America’s Sport of the Future.

Previously on the Grantland Network:
The Masked Man
The Jalen Rose Show
The Basketball Jones
Jonah Keri with Tyler Kepner