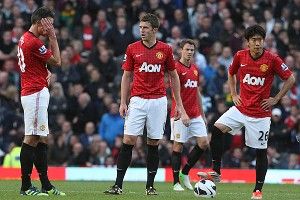 It started innocently enough last season with the simple yapping of a finely manicured Italian hand. And now, following Manchester United’s 3-2 loss at home to Tottenham, it does appear that the divine aura surrounding Sir Alex Ferguson is on the wane. Could Fergie Time really be a thing of the past? The Blazered Men are inclined to think so.

Manchester isn’t the only place where the script is undergoing a revision. The visions of new managers at both Liverpool and the aforementioned Tottenham look to finally be taking hold. In this week’s pod, Michael and Roger cover these and other story lines that emerged over the weekend, including the continued rise of a certain club that will be left unnamed for fear of jinxing its unnamed flying start. All we can say is: In Fellaini’s ‘Fro We Trust.