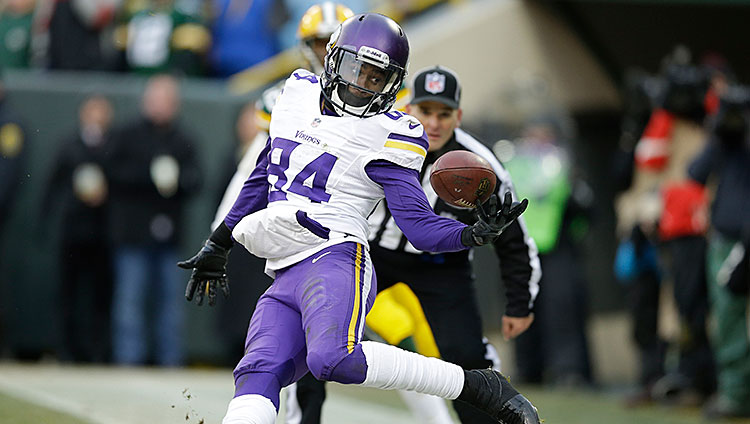 This is one of those dead stretches of the NFL calendar when player proclamations are somehow news. Most of it makes for “Well, what’s he supposed to say?” reactions, but when Cordarrelle Patterson said yesterday on NFL.com that he’s going to be a “top-five playmaker” this year, the collective response was a little different. And that’s because he already is.

By the end of last season, even most casual NFL fans had heard of Patterson. Draft junkies, who knew Patterson as one of the Vikings trio of 2013 first-round picks, were the earliest adopters. Those looking for fliers at the end of their fantasy drafts came next. The uptake slowed down after that. With just one season of major college football, Patterson had an even harder time than most rookie receivers picking up the nuances of a famously tough position. It was near the end of the year when Patterson finally became a fixture for the final vestige of laid-back NFL supporters: RedZone watchers. He scored in each of Minnesota’s last five games, usually in a way that makes someone tap their buddy one stool over and ask, Did you see that?

What the Vikings seemed to learn in those final five games was that Patterson’s lagging understanding of his position didn’t matter. Minnesota needed the ball in his hands, however it could get it there. Patterson got 10 combined carries over that stretch. They went for 156 yards and three touchdowns.

Throwing out the average distance of Patterson’s nine touchdowns in 2013 is a little unfair, considering one was a 109-yard kickoff return against the Packers. Just know that six of them went for at least 33 yards. All Patterson did as a rookie was make defense-shredding plays, but he did it in a way pretty much no one in league history has ever done.

Patterson’s best weapon isn’t his speed (although at 4.42 in the 40, he has plenty). It’s how easily he makes tacklers crumble. Wiggle isn’t a rare trait for great kick returners, but it is rare for someone who measures 6-foot-2 and nearly 220 pounds. Patterson can put his foot in the ground and stop his entire body, seemingly mid-stride, in the same way Devin Hester could. The difference is that Hester has less body to stop. The way Patterson changes direction at his size defies laws of nature.

Matt Elam manages to fall twice on that play. Where we’re going, we don’t need physics.

None of that is new, though. Coming out of Tennessee, the billing on Patterson is that he could score any way you liked. In 2012, he was the first college player in four years to score a touchdown four different ways. The challenge was whether he could develop into a polished receiver, and it’s the same challenge he faces going into this year.

Patterson’s main value as a receiver last year came in using that big frame near the goal line, culminating in a body-shielding end zone catch in the Vikings’ finale that was reminiscent of another no. 84 for the Vikings. If he can turn into a consistent receiving option for Minnesota, it could transform its options on offense.

The encouraging part is that the pieces for that evolution are in place. No one will be surprised when Teddy Bridgewater turns into the best quarterback from this draft, and the man calling the plays is Norv Turner, who just happens to be the guy who helmed Josh Gordon’s offense a year ago. Patterson probably won’t catch Gordon as a receiver any time soon, but there is one area where the gap is smaller: the title of most exciting player in the NFL. By year’s end, I think it’s one Patterson has. All I ask is that whatever Turner’s plans are, the kick returns must continue. Remember, guys: the ball in his hands, however you have to get it there.