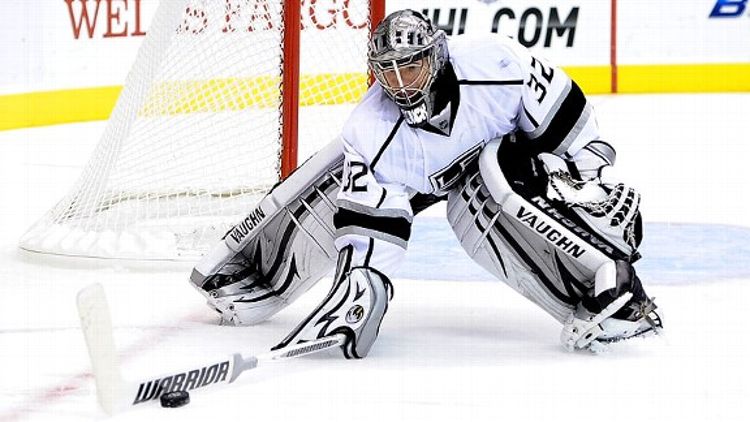 There may be no position in all of sports that can more single-handedly and consistently alter the course of a single game, a playoff series, or an entire season than a hockey goalie. (And there’s certainly no position in all of sports — or, really, life — that boasts better helmets.) These guys are fearless, flexible, fast — and often fairly unhinged. Here, we salute five of the week’s noteworthy performances in net.

JONATHAN QUICK: The L.A. Kings’ 25-year-old goalie picked up his 1,00th win, and while he technically wasn’t the only one to reach that nice, round number Thursday night — Ottawa’s Craig Anderson did, as well — his milestone paired a little bit more nicely with some of his other statistics this season. Quick leads the NHL in save percentage (a ridiculous .967 through five games) and is juuuust barely second in goals-against average, letting in only 0.97 a game. He’s won all of his past three starts, and the most recent two have been shutouts, a streak that he preserved with a big save late in the third period Thursday night against the Phoenix Coyotes.

With his 1,00th win, Quick is — god, it’s impossible to relay this without sounding like a pun is intended — the fastest L.A. King to reach the century mark, doing so in 43 fewer games than Kelly Hrudey, the next on the list. (Although, to be fair, Hrudey played in an era in which games could end in ties.) During preseason, it seemed as if the L.A. Kings might be rotating him alongside another talented goaltender, Jonathan Bernier — but the Connecticut-born Quick has turned playing time into a pretty easy decision for coach Terry Murray.

KARI LEHTONEN: Don’t look now, but the Dallas Stars are 5-0-0 when their Finnish goalie Kari Lehtonen is in net. While Lehtonen has yet to post a shutout, he’s also been remarkably consistent, never allowing more than two goals this season, and picking up wins the tense way: Four of Dallas’ five victories have been by a mere one-goal margin.

The worst part about the Stars’ and Lehtonen’s season thus far might be how few people have been around to see it. With the Texas Rangers in the World Series and the Stars not initially expected to come out this well out of the gate, ticket sales in Texas have not exactly been up to snuff. Perhaps that’s why the Stars’ Sheldon Souray turned to baseball analogies to describe his teammate: “If Kari was a baseball player, he would probably be Nelson Cruz right now,” he said. (Presumably he meant it in more of an “ALCS MVP” way, and not, per this headline, “The player no one wanted … until now.” Though that’s probably also true, at least from a fantasy perspective.)

HENRIK LUNDQVIST AND RYAN MILLER: Both the Buffalo Sabres’ Ryan Miller and the Rangers’ Henrik Lundqvist stopped 40 shots on Tuesday night. Miller surrendered just one goal in a 3-1 win over the Montreal Canadiens and Lundqvist had one of his best games as a Ranger, blanking Vancouver in a game that was much closer than the ultimate 4-0 score. (The shutout was the first of his season; last year he led the league in the category, blanking the opposition 11 times.) On Thursday, it was Miller’s impenetrable turn, as he stonewalled the Florida Panthers for no goals on 22 saves.

Miller is amazing to watch, a smooth operator in the manner of, say, Roger Federer: His instincts are so canny that he just always seems to be in the right place, making it all look much easier than it is. Lundqvist can be flashier: After the game he took interviews while sporting a loud hat that looked like the kind of flashy accessory he might choose to don on his own; it turned out to be the Rangers’ new “Broadway Hat,” though, purchased while the team was in Europe and awarded after each game to the locker room’s most deserving.

TOMAS VOKOUN AND SEMYON VARLAMOV: Another goalie recording a 40-save evening was Tomas Vokoun, who stopped all but two of the Philadelphia Flyers’ 42 shots Thursday night to give the still-unbeaten Washington Capitals their sixth win of the year. It was only last week that Vokoun’s agent was airing public grievances and Vokoun was allowing five goals to go by against Tampa, but it now seems like a distant memory.

The Capitals signed Vokoun, formerly of the Florida Panthers, to a one-year, $1.5 million contract this offseason after trading their young backup Semyon Varlamov to Colorado for a first- and second-round draft pick. At the time, it seemed like a steal — I assumed those picks would end up being pretty valuable given the Avalanche’s weaknesses — but thus far the young Varlamov has made Colorado look as if like they paid a fair price. He won three straight games on the road, all by a one-goal margin, and while the Avalanche fell to the Chicago Blackhawks on Thursday 3-1, one of those goals was on an empty net and the loss was in some ways mitigated by a nasty falling-forward glove save that Varlamov made on Chicago’s Marcus Kruger with five minutes to play in the third.

After being traded this summer, Varlamov said that he immediately signed a three-year contract “without thinking … I made a decision and didn’t listen to anyone. I just put my signature on the contract.” It’s early, but he’s already begun to put his signature on his new team.

ROBERTO LUONGO: Fans in Vancouver cheered Luongo on Tuesday night late in the third period, but the support was sarcastic: All he was doing was touching the puck on a routine clearing play with no New York Rangers in sight. It was a rough outing for Luongo, who faced only 19 shots the whole game but gave up four goals, all in the third period. The reaction was both way harsh and pretty understandable: The combination of Luongo’s megacontract, erratic play during the Stanley Cup Finals, and awfully talented understudy Cory Schneider makes the Italian Stallion easy for disgruntled fans to ride. Even the local media got in on the act, with an editorial by the staff of The Province gravely suggesting that the solution to the goaltender’s performance might be a straight-up trade to Tampa Bay for … Vincent Lecavalier? (I’ve heard more logical trade ideas being spouted by lonely callers on late-night sports talk radio.)

But while the Canucks could have opted to give Luongo a rest in the team’s following game against the Nashville Predators, he was back in goal Thursday night, allowing only one goal en route to a 5-1 Vancouver victory. (In his previous four games, he let 15 pucks into the net.) There’s reason to be patient: Luongo had a similarly slow start last season, one that ended up with him being one of the league’s top netminders. At least he’s keeping his own head while all about him are losing theirs: Asked about his snazzy new helmet, which only just arrived, Luongo cracked: “It’s a couple weeks late, just like my game.” Godspeed, good sir.

Filed Under: And a Beauty!, Hockey, NHL